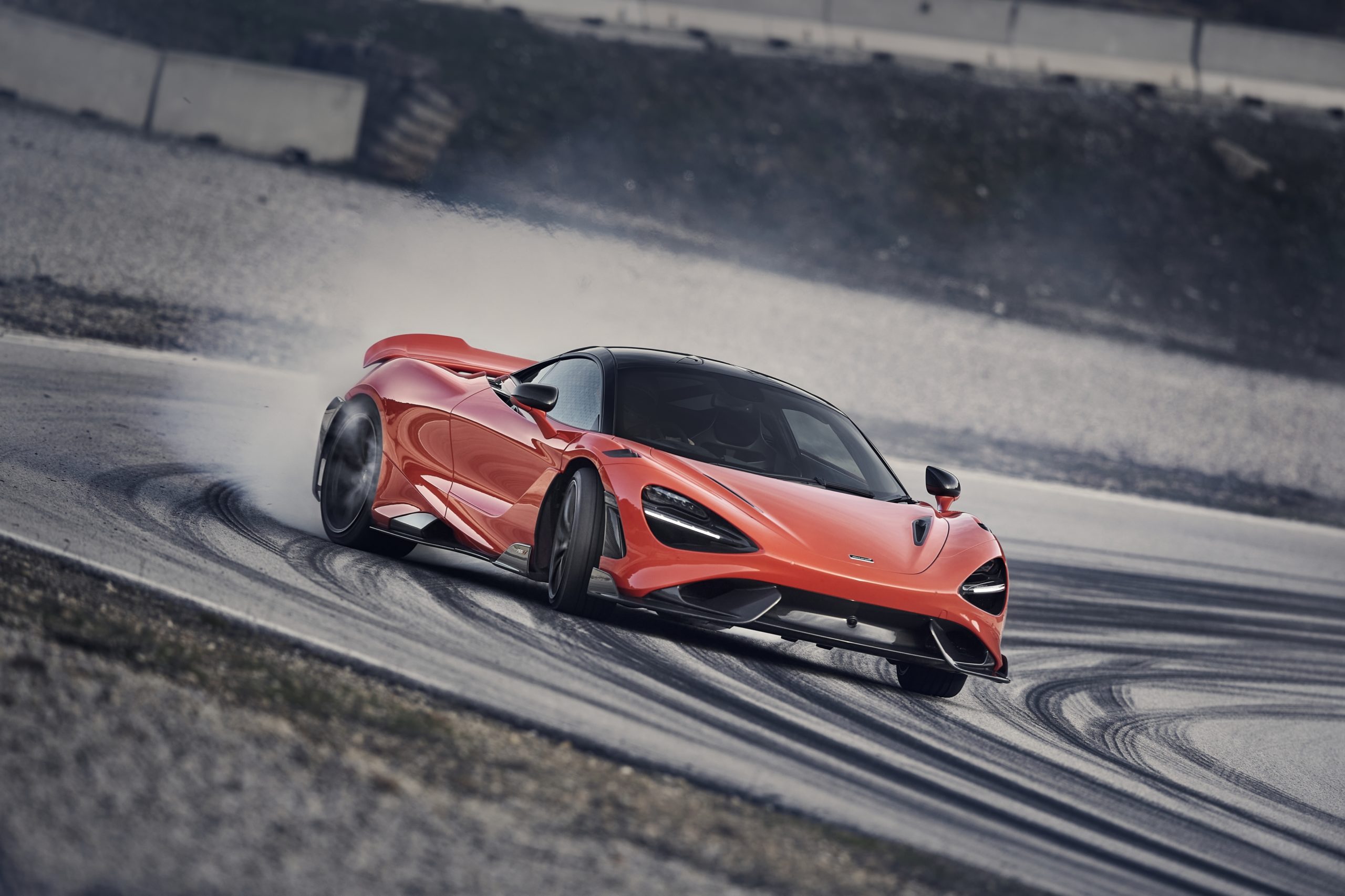 What do you do when you’ve created one of the world’s fastest and most desirable supercars? Well, if you’re McLaren, you make it even faster and more desirable.

The British brand has taken the wraps off its latest creation, the 765LT, which is the latest in its special ‘Longtail’ series that elevates its standard models to weapons-grade track-day machines. What started life as the already potent 720S has been given upgrades to every aspect of its performance in order to create a successor to the 675LT. If you were unlucky and missed out on the McLaren Senna, then the 765LT should be comforting consolation prize.

“The 765LT is the most accomplished and exhilarating LT model ever from McLaren Automotive,” said, Mike Flewitt, CEO, McLaren Automotive. “Incredible performance and astonishing levels of driver engagement – the result of hundreds of detailed engineering actions undertaken to ensure the purest possible connection between driver and car – are the stand-out attributes of an LT developed with single-minded determination to deliver a wholly immersive driving experience to those who secure one of the 765 available to customer order.” 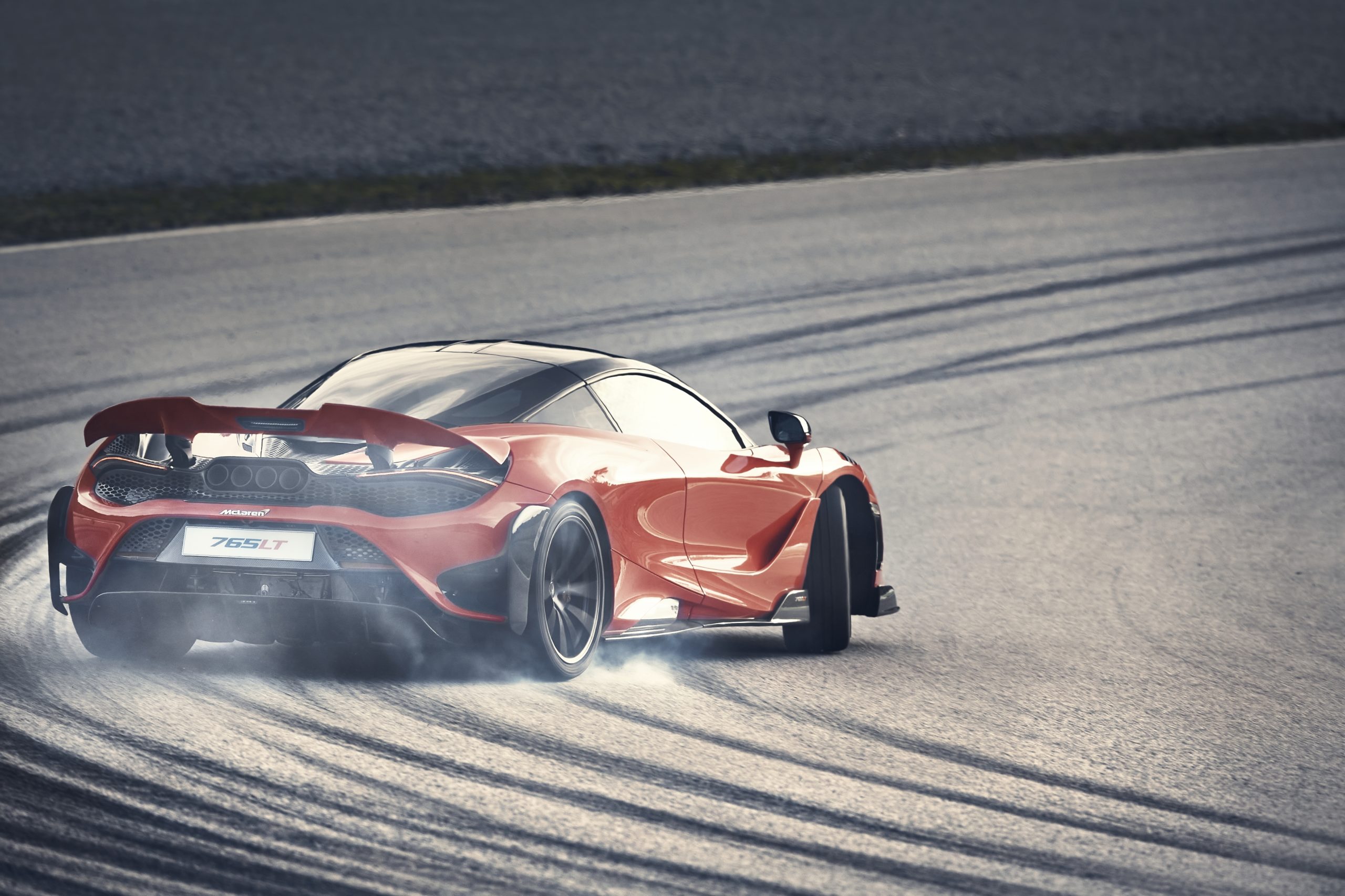 McLaren’s dependable 4.0-litre twin-turbo V8 engine from the 720S remains but for the 765LT it has been given a significant upgrade in performance. Power has increased by 40kW to a punchy 570kW at 7500rpm and torque is up by 30Nm for a whopping 800Nm at 5500rpm; that’s enough to make it the most powerful road-legal Longtail model yet.

To achieve that increase McLaren has added forged aluminium pistons, a three-layer head gasket (taken from the Senna), carbon-coated followers in the valve train and added an extra fuel pump as well as revising the oil pump.

The seven-speed dual-clutch transmission has been retained from the 720S but also gets upgrades to deal with the extra performance. It includes a new feature dubbed ‘limit downshift’ which will stop you from downshifting too quickly and over-revving the engine, and will instead wait for the right moment and swap the cog itself’ previously the gearbox would simply ignore the request entirely. 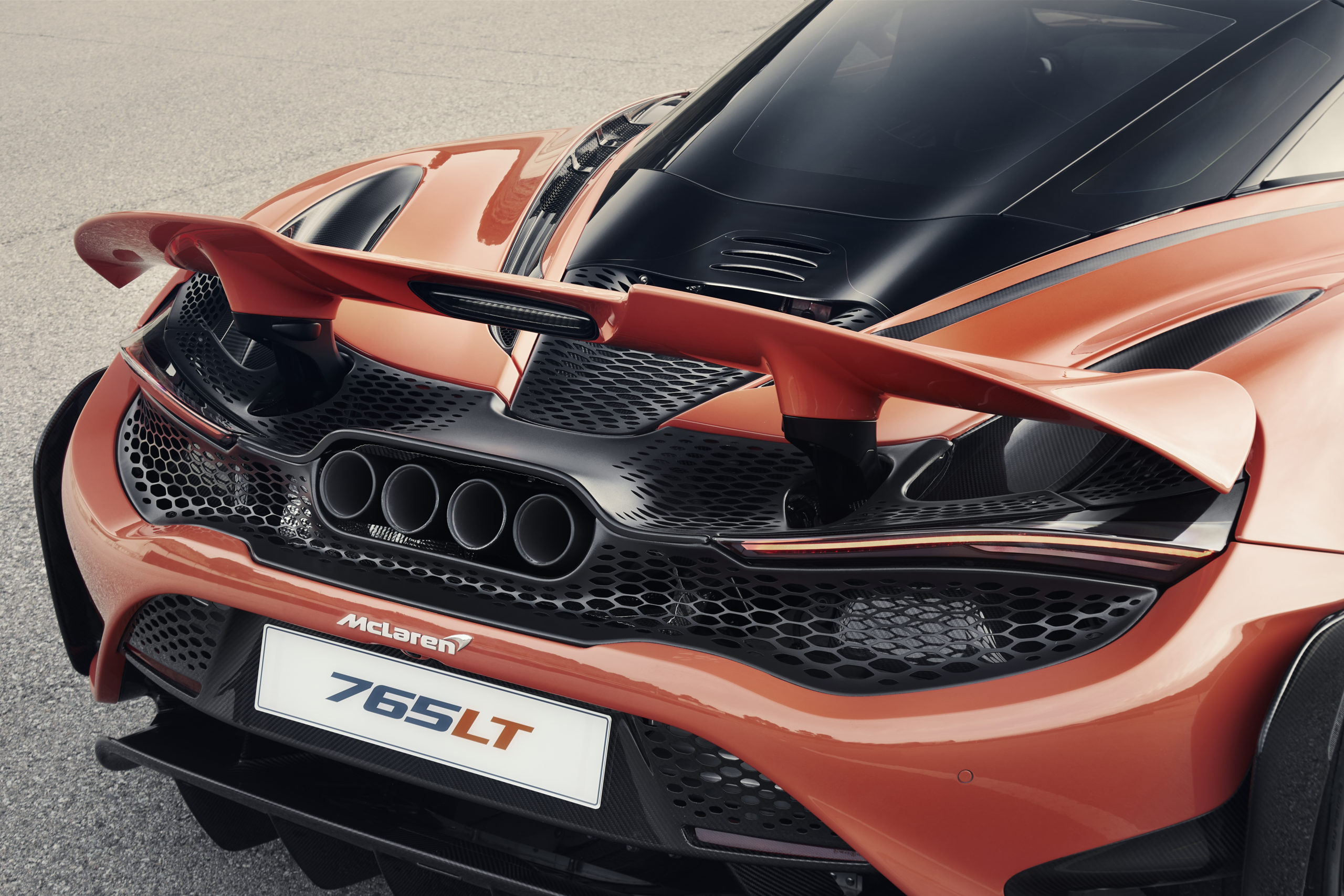 Not surprisingly given McLaren’s Formula 1 heritage the 765LT enjoys a state-of-the-art aerodynamic set-up that improves its on-track handling.

For starters there’s an extended front splitter, carbon fibre floor, unique door blades, a longer rear diffuser and a rear wing that all work together to generate 25 per cent more downforce than the 720S. The rear wing is now set 60mm higher and further back than the 720S (which helps justify the ‘Longtail’ name that first began on the Le Mans-spec F1 GTR race cars) but still retains hydraulically-operated movement so it can act as an ‘airbrake’. The shape of the wing also helps extract hot air from the engine bay.

It can be set in three different positions – Driver Downforce, DRS and High Speed Braking. The first setting is engaged when the driver hits the ‘Aero’ button on the dashboard and sets the wing higher for increased downforce. DRS engages automatically when the car is accelerating in a straight line. Finally, High Speed Braking when you hit the brakes at high speed, engaging in less than half-a-second to increase downforce by 60 per cent for quicker, more stable deceleration. 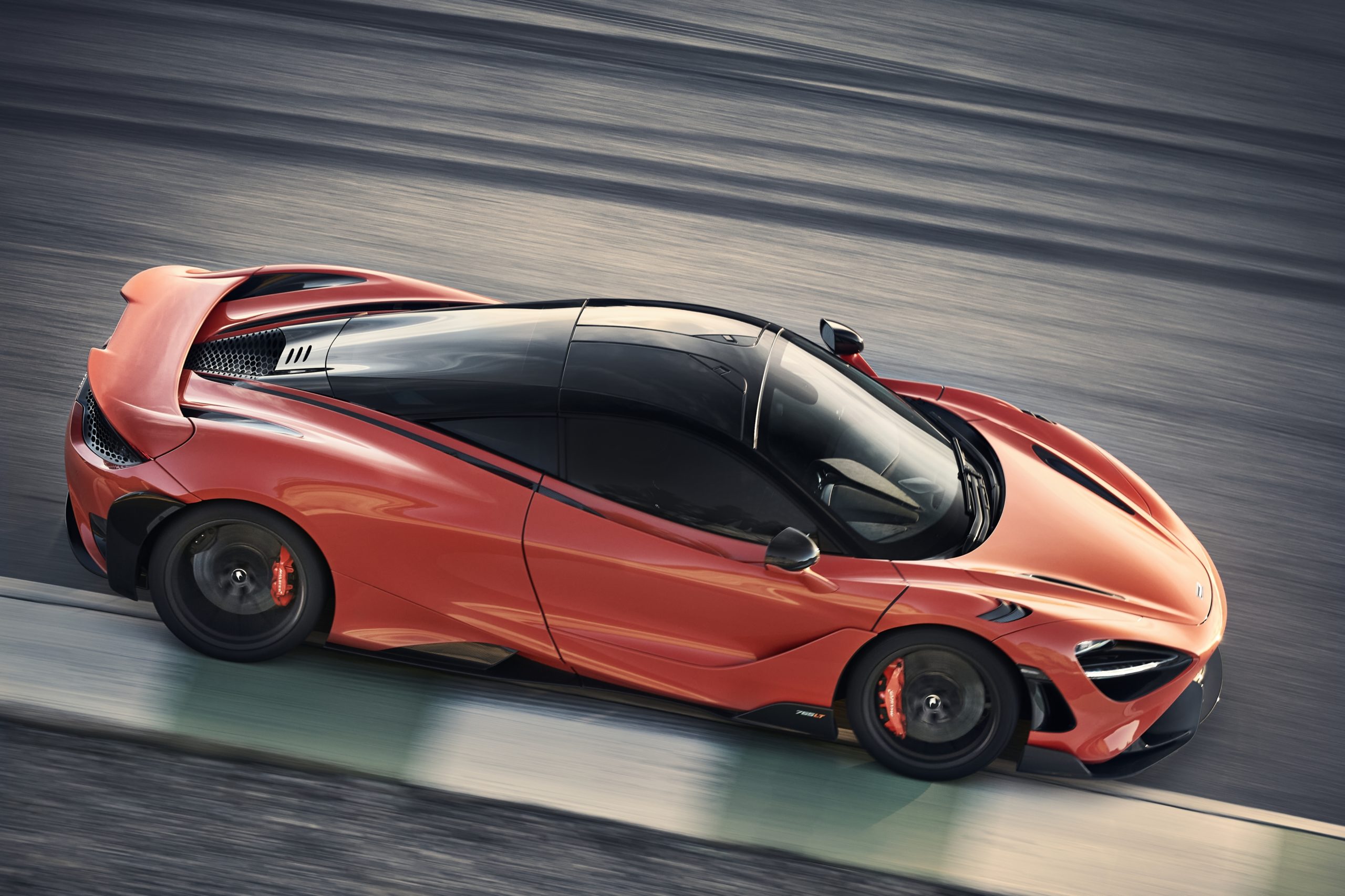 Taking lessons learnt on the Senna and Speedtail programs McLaren has honed the dynamic capability of the 765LT to provide the ultimate engagement for the driver on both the road and track.

It uses the same linked-hydraulic Proactive Chassis Control II suspension system used in the 720S, but features upgrades to both the hardware and software taken from the Senna. The front end geometry has been changed, with the track now 6mm wider while the ride height has been reduced by 5mm at the front too.

The springs are new as well, made of a lightweight material in order to save unsprung mass while retaining the same ride performance.

The steering ratio is now quicker and there is a stiffer torsion bar for greater feedback to the driver.

Naturally on such a fast car the stopping power is equally strong. Carbon ceramic discs are clamped by calipers taken from the Senna. McLaren is introducing a new feature on the 675LT, inspired by Formula 1, called integrated caliper cooling, that can deliver cool air directly to the front caliper and disc for better brake performance and pedal feel.

If that’s not good enough for you, or you plan on plenty of track days in your 765LT, you can upgrade to the same carbon ceramic discs fitted to Senna (which are 60 per stronger than standard) as well as bespoke brake pads. 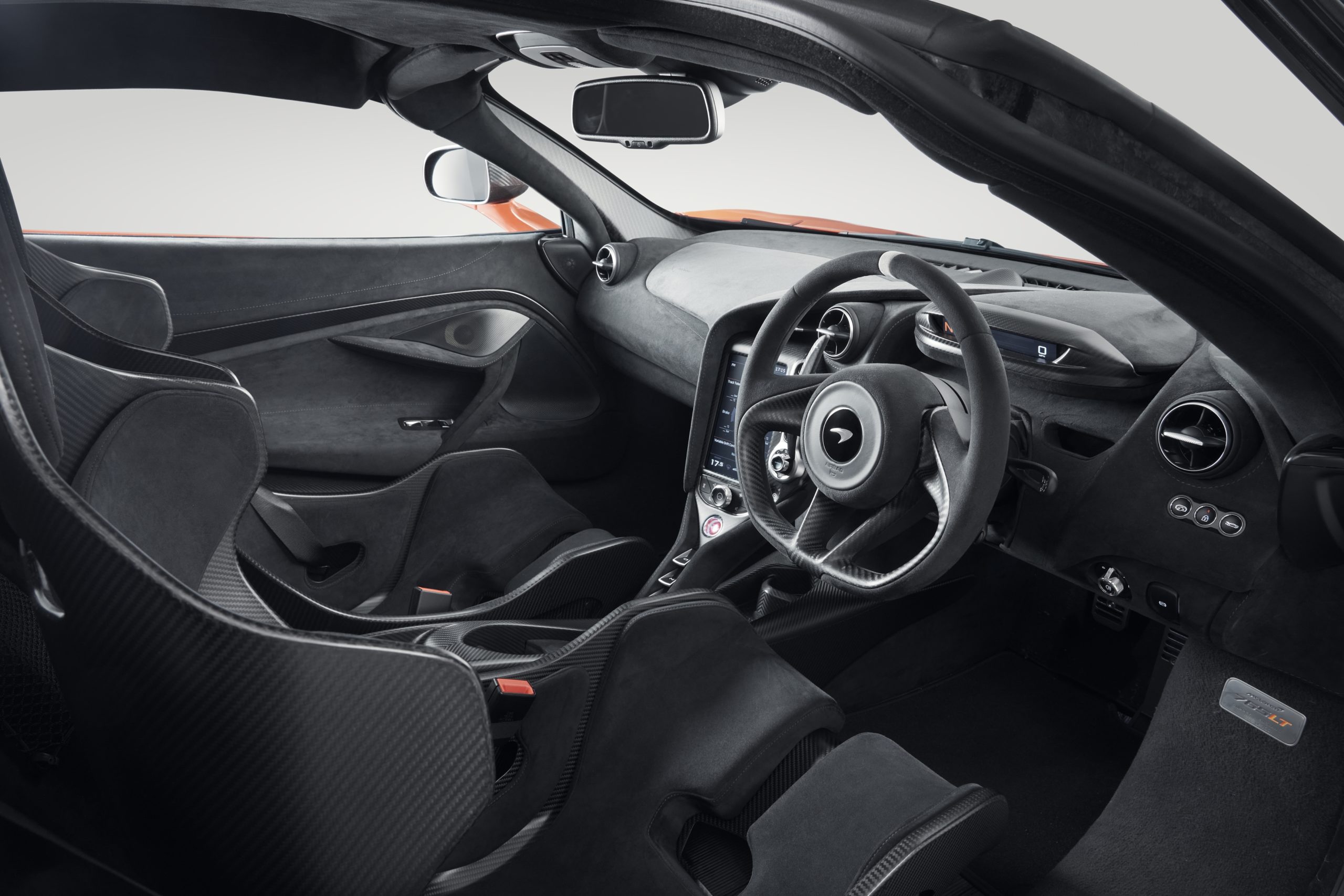 Saving weight was the driving ethos for the 765LT designers, with every gram of the car having to be justified. Even the licence plate holder is now made from carbon fibre.

That’s not the only carbon fibre part, obviously, with the front bumper, front floor, side skirts, rear bumper, rear wing and rear diffuser also made of the same expensive but lightweight material. And while the bonnet, front and rear guards and the doors are made from aluminium, if you’re really keen to save more weight they can all be optioned in carbon fibre.

A special lightweight Alcantara material has also been used throughout the interior, to save weight while still looking sporty. There’s no carpet or floor mats and even the door storage pockets have been replaced with nets.

The air-conditioning and sound system are deleted as standard, in order to keep weight down, but can be optioned back in for no additional charge.

“A McLaren LT really challenges us to push the boundaries of what is possible – especially with regards to weight reduction – and the 765LT is no exception,” explained James Warner, chief engineer of the 765LT program. “The 720S is already very light, helped by innovations developed in previous LT programmes, but we have investigated every area of the car to deliver even further savings: ‘helper’ springs in the suspension enable a 1.5kg reduction, a bespoke lightweight centre tunnel saves 1.4kg and optional carbon fibre fenders are 1.2kg lighter than the standard panels.”

McLaren will only build 765 examples of the 765LT and all are expected to be snapped up quickly by collectors with interest Australian parties advised to contact their nearest dealer as soon as possible. Because a car this fast, will go fast.