The SCG 008 will be a Dakar-ready kit car

No-one should ever accuse James Glickenhaus of lacking ambition.

The financier-turned-racer-turned-supercar-manufacturer has now set his sights on another challenge – the Dakar Rally and Baja 1000 – with an all-new kit car that will also be road-legal.

The SCG 008 is the latest model for his eponymous Scuderia Cameron Glickenhaus outfit, that is already involved in GT3 racing and has declared its intention to compete at Le Mans with its own hypercar. 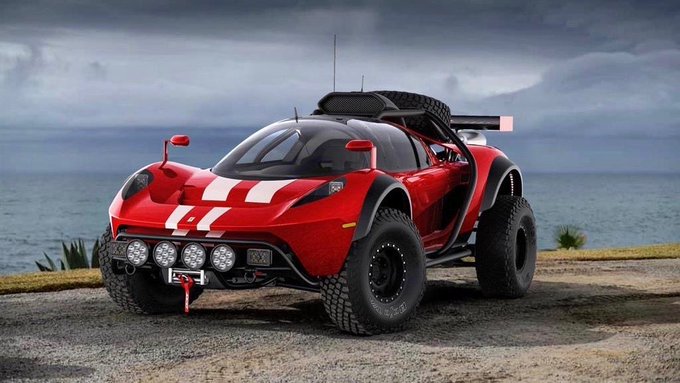 The SCG 008 will be a rear-wheel drive, three-seater

The SCG 008 will reportedly be sold as a kit car, rather than a turn-key model like the rest of the SCG range, which should allow it to be road-registered in its native USA market. While details are still fluid, with SCG tweeting updates, what we do know is that the SCG 008 will be rear-wheel drive and seat three, in order to make it eligible for the Dakar Rally and also better for pre-running the Baja course.

There are mixed reports of what will power the supercar-cum-buggy, with some outlets saying it has been built to accommodate a GM V8, while others report a 2.0-litre four-cylinder motor. Given its kit car nature, it seems likely there will be a variety of engines installed in the back of the SCG 008. This new model is designed as a lower cost, entry-level model for off-road driving and racing, but for those more serious about winning the company also builds the SCG Boot. Named in honour of Steve McQueen’s iconic Baja Boot, the SCG version is a purpose-built buggy powered GM LT1 V8 making 343kW.

Then there’s the company’s SCG 007, an all-new model being created to race for the outright Le Mans victory in the new Hypercar class. The only technical detail the team has released is it will be powered by a 3.0-litre twin-turbo V6 engine. Oh, and if that’s not enough, SCG will build a limited run of road-legal versions of its Le Mans entry.