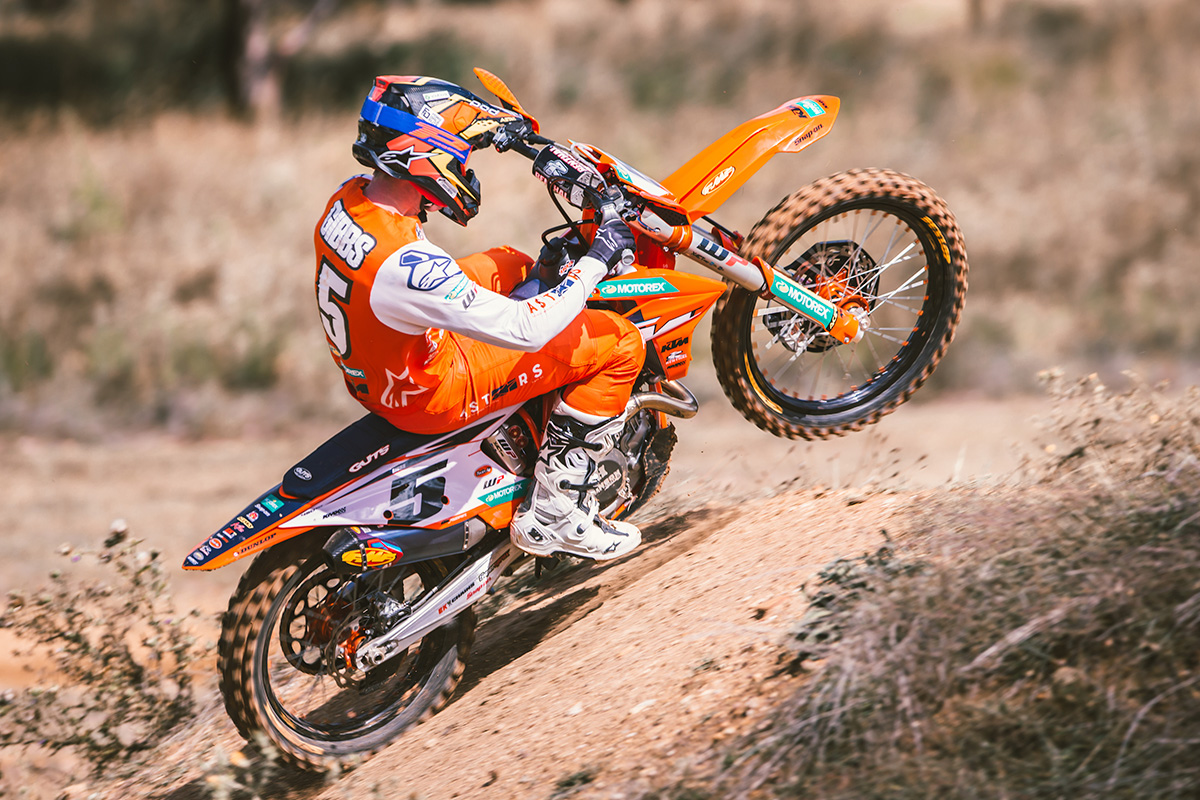 KTM Racing Team has its sights set on the 2022 Australian ProMX Championship, with Kirk Gibbs ‘Ready To Race’ in MX1 and injured MX2 rider Nathan Crawford due to debut at a later date.

At 33, Gibbs is a mainstay at the national level, with the Sunshine Coast-based racer previously lifting the national MX1 trophy with KTM back in 2015 riding the 450 SX-F.

Now, upon return to the in-house KTM Racing Team and after experiencing a solid pre-season lining up in a mix of state-level races, Gibbs will enter ProMX confident that he can deliver the premier class championship once again this year.

Unfortunately for Crawford, 24, an incident while training at Coolum one week out from the opening round resulted in a broken femur that will sideline him for the coming months. He underwent successful surgery earlier this week to begin his recovery.

Prior to his injury, highly-rated Queenslander Crawford had been in exceptional form aboard his 250 SX-F – recently winning the Conondale Sunshine State MX Series round – and was able to take part in the team photoshoot before being ruled out.

The 2022 Australian ProMX Championship will take off this Sunday, 27 March, at Wonthaggi, VIC, and is scheduled to span a total of eight rounds throughout the coming season.

Kirk Gibbs: “The past two race seasons have been heavily affected by covid, but last year I showed glimpses that I’m capable of winning races. Now that I’ve returned to KTM, everything feels so familiar and I’m excited to be heading into 2022 with the team that I’ve enjoyed success with in the past. Over the off-season, I’ve worked on a few things body-wise and I’m feeling fit and ready for the gates to drop at Wonthaggi. In the past I’ve done well there, but I’ve also had some challenging days. It’s a track that can sort the men from the boys, particularly if it rains, so the aim is to just be consistent, stack some solid points and remain healthy for the entire championship.”

Kyle Blunden (KTM Group Australia Motorsport Manager): “It’s been a long time between gate drops and we couldn’t be more excited for the 2022 season. We have a completely new team this year – both with riders and mechanics – and we’re coming to the races with a lot of experience. Of course, we’re incredibly disappointed that Nathan has suffered such an injury after an excellent pre-season getting comfortable on his KTM 250 SX-F and building with the team. The best of Nathan is yet to come and we look forward to assisting him through his recovery and back to full speed. That said, it’s great to have Kirk Gibbs back on the KTM 450 SX-F. Kirk’s been working extremely hard in the pre-season and getting better every time he gets on the bike. He’s in a great headspace and is as determined and focused as I have ever seen him. It’s an exciting time to be a ProMX fan and we are Ready To Race!”