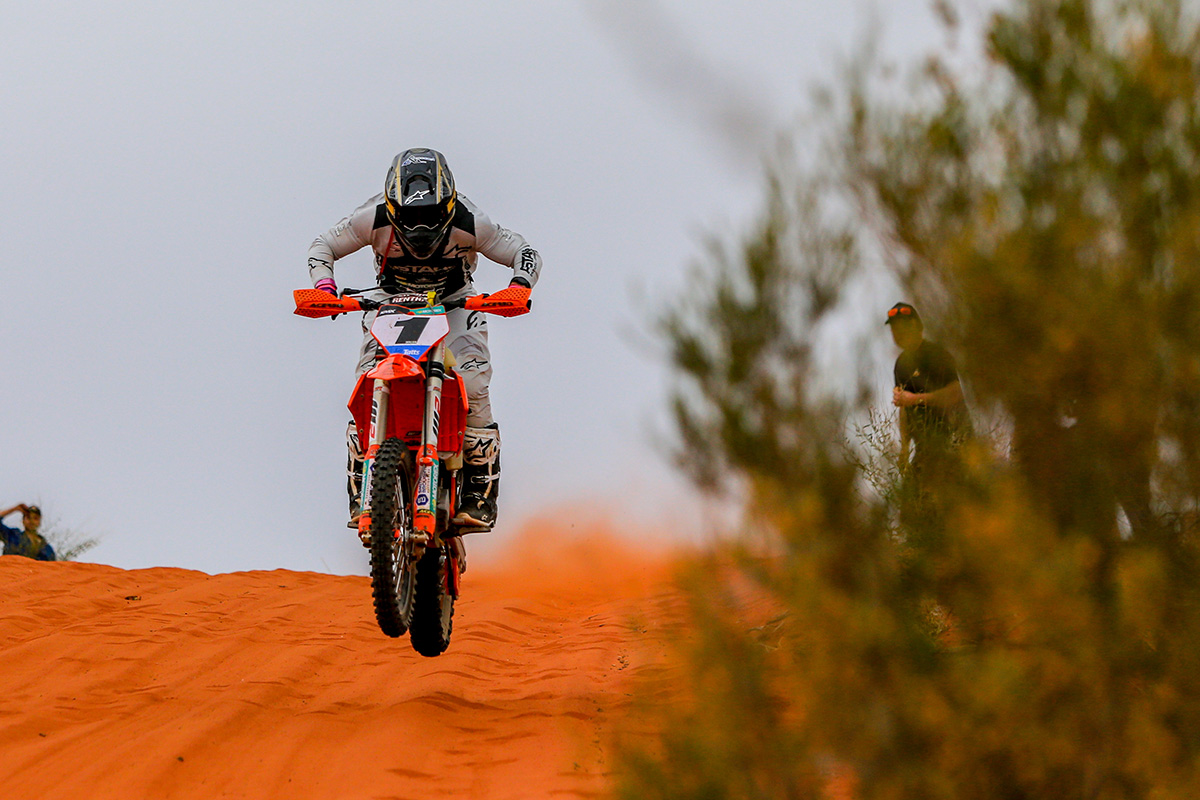 KTM has joined forces with one of the largest automotive groups in the Northern Territory to form a new-look desert racing program that will debut in the 2022 Finke Desert Race.

Both Walsh cousins will race the mighty KTM 500 EXC-F at Finke, in addition to the Hattah Desert Race and the Don River Dash in North Queensland this season. It’s an exciting schedule led by David Walsh as both team manager and rider.

The establishment of the HMG Motorsport Group team is the best of both worlds for both the owner, Aaron Heath, and its two racers. They’ll have access to in-house KTM resources, while the arrangement means they have the freedom and flexibility to conduct their own local pre-season testing and operate logistics at the races.

David Walsh, 32, enters 2022 as a two-time Finke winner and eager to extend his winning streak. With last year’s race being shortened to one day, the Alice Springs legend is determined to again prove that he’s the master of high-speed desert racing, as well as undertaking his new team manager duties.

After cutting his teeth on the national motocross circuit, Liam Walsh, 21, has thrived after making the switch to desert racing. At his first Finke last year, the Darwin-based racer won the 450cc class and finished a remarkable 10th Outright on a KTM 450 SX-F.

The world-renowned Finke Desert Race will be held in the Northern Territory from 9-13 June, before the Hattah Desert Race takes place in July and the Don River Dash is contested during September.

Aaron Heath (HMG Motorsport Group KTM Team Owner): “Heath Motor Group is a motor group in Alice Springs, Darwin, Kununurra and the Kimberley Region. When the opportunity arose to establish the HMG Motorsport Group and run KTM’s desert racing campaign with David and Liam, we jumped at it. I’ve had some sort of involvement with the Walshes for at least five years and I’m excited to have them both on the team. David will be the team manager and senior rider, while Liam will be the second rider. We’ll work on a pathway program for more events down the track and look forward to this partnership with KTM into the future.”

David Walsh (HMG Motorsport Group KTM Team Manager/Rider): “Aaron Heath has been supporting me for a few years and helped me get to the Baja 1000 in 2019. This year the opportunity arose to establish this new team and I’m really looking forward to it and seeing what we can do. Having Liam on the team is exciting, as he’s a fast racer, and now that he’s got the backing of KTM, he’ll hopefully be able to show his true potential. This year will be my 15th attempt at Finke and I’m aiming to claim my third victory. I can’t wait to get stuck into testing!”

Liam Walsh: “It’s pretty incredible to get an opportunity like this. I’ve raced the Australian Motocross Championship with team support in the past, but it was never to this standard where everything is provided. It definitely increases the motivation levels and makes me want to give every race 110 percent, to repay the faith they’ve placed in me. At last year’s Finke I won the 450 class and finished 10th Outright, and for 2022 I want to achieve a top-five result in the 500cc class. Being David’s cousin, I’ve seen the success he’s had in desert racing and I’d love to replicate that success and keep it in the family.”

Kyle Blunden (KTM Group Australia Motorsport Manager): “We are excited to announce our partnership with the Heath Motor Group, who, led by David Walsh, will be representing KTM at the Finke Desert Race in 2022. It’s an essential step for our long-term strategy at this iconic event and one we are excited to see evolve over the next 12 months. Team owner Aaron Heath is a motorcyclist and motorsport fan at heart and has some very experienced people onboard. Finke legend and Alice Springs local, David Walsh, will once again return to this great race to defend his title and assist in the day-to-day logistics of running the team. In addition, HMG Motorsport Group welcomes Liam Walsh to the team after a successful outing in 2021 alongside David on the KTM 500 EXC-F. KTM has a long history of success in the desert and we look forward to working closely with the team to continue that success.”