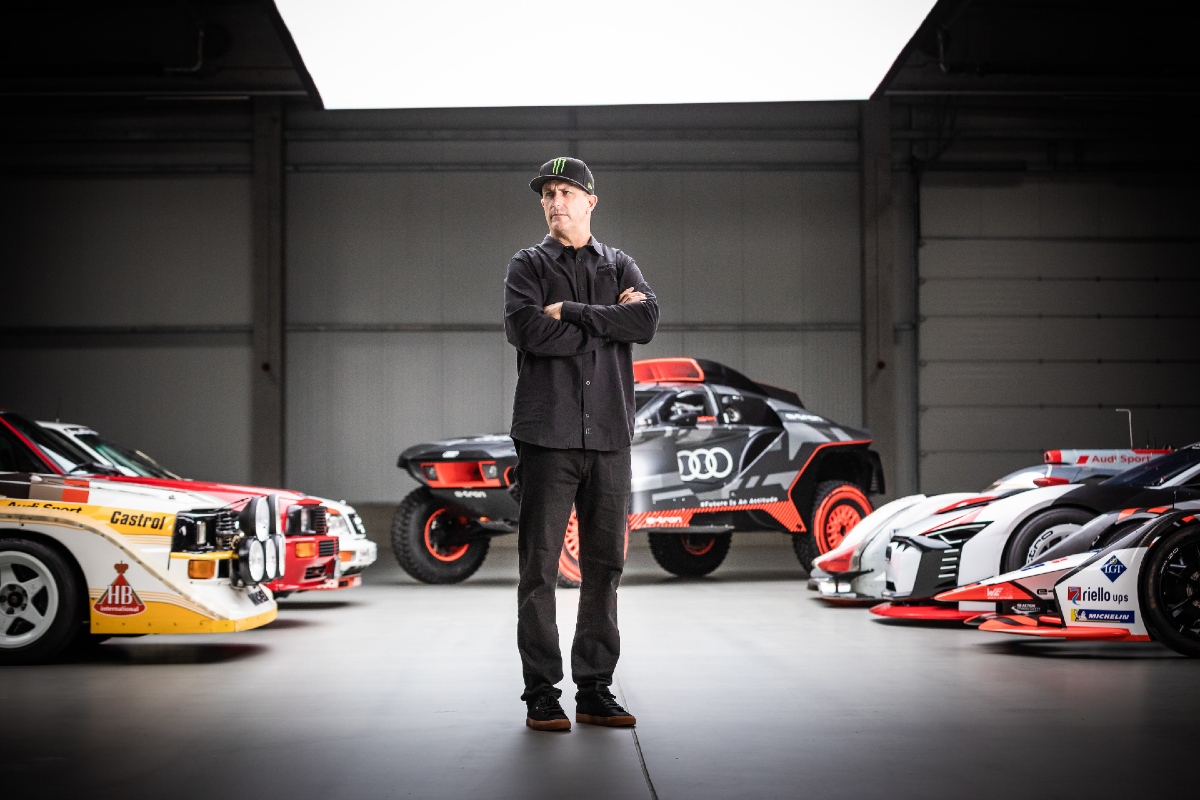 Ken Block knows how to drift and drive a rally car, but he’s also a shrewd marketing mind – and Audi is hoping to tap into all those skills to help make electric vehicles cool.

Having split from Ford at the start of the year, Block has been driving a variety of cars in 2021, including a Subaru WRX STI and a Trophy Truck. Now he’s joining forces with the German giant to focus on developing electric performance cars.

Audi is already heavily involved in electric racing, having competed in Formula E and is now working on its hybrid RS Q e-tron for the Dakar Rally. Block and Audi haven’t announced any specific plans yet, but both sides believe they can help make EVs more exciting and appealing to the next generation of fans and drivers.

READ MORE: How the Audi RS e-tron GT will define a new era of electric performance “Audi stands for ‘Vorsprung durch Technik,’” explained Oliver Hoffmann, board member for technical development at Audi. “Every day we are trying to push boundaries to create the future of mobility. Our goal is to fascinate our customers with progressive design, innovative technology and a broad digital ecosystem. I am delighted that we were able to attract Ken Block and his team to Audi.”

Block recently headed to Audi Sport headquarters in Germany to get familiar with his new manufacturer partner. He drove a variety of the brand’s historic race cars, including the car that helped inspire his love of rally – the Audi quattro S1. He also sampled the Audi V8 DTM from the early 1990s and the e-tron Vision Gran Turismo and production-ready RS e-tron GT. Ken Block drove some of Audi’s most iconic race cars

“Electric mobility is the future,” Block said. “I see the electric car as a leap forward for us as a society in order to create something that can not only reduce emissions and hopefully make the planet a better place. But not only that: it’s also about performance. I love anything that makes me go faster. Electric cars can do that. And as far as sound goes, I have kids who don’t care about that. They think that the sound of electric cars is just as cool as the sound of internal combustion engines.”

Block already has some experience with EV race cars, having won the inaugural ‘Projekt E’ rallycross event in 2020 and sampled the Extreme E Odyssey 21 on a Dakar stage last year too. He also got behind the wheel of the Ford Mustang Mach-E 1400 built by drifter Vaughn Gittin Jr. While Audi and Block haven’t announced plans yet, it’s safe to assume the partnership will involve a high-powered, rally-style EV capable of burning tyres.

“At Audi, motorsport is paving the way for future technologies,” said Julius Seebach, managing director of Audi Sport GmbH and the man responsible for motorsport at Audi. “Electrification is a game changer, just like quattro drive once was. With Ken Block, we’ve got exciting things in store that go perfectly with our strategy.”