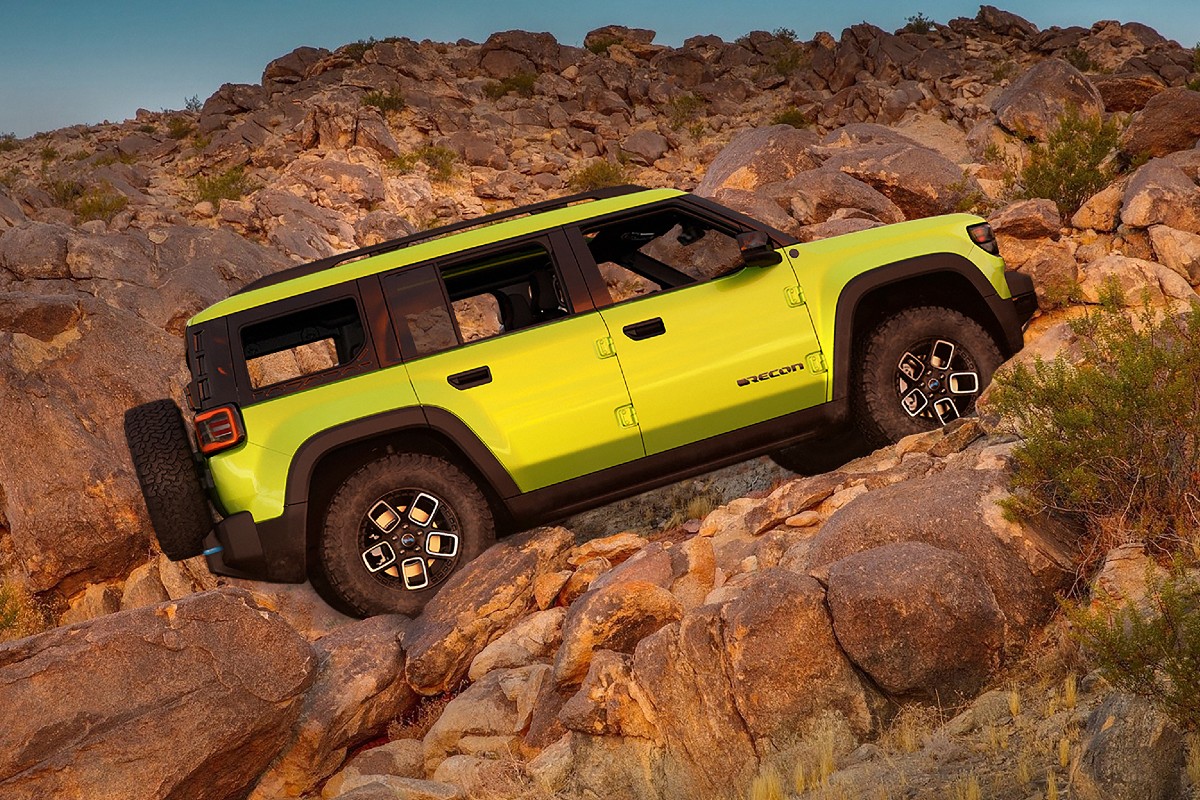 Jeep’s future in Australia is electric with the Recon and Wagoneer S confirmed to arrive in local showrooms in the near-future. But these electric models won’t just be show ponies for the city, the brand’s global boss has insisted that they be as capable as any model to wear the Jeep badge.

Speaking to Australian media at the recent Detroit Motor Show, including Torquecafe, Jeep Brand CEO, Christian Meunier, confirmed both the Recon and Wagoneer S for the local market and indicated the compact Avenger model is also under consideration.

More importantly for off-road adventure fans, Meuiner confirmed that the Recon – its all-new mid-size electric SUV – will be ‘Trail Rated’, the brand’s highest score for off-road performance. In order to get the Trail Rated badge, the model must be able to conquer a series of off-road challenges, capped by the tortuous Rubicon Trail in California, which is only 30km in length but can take up to nine-hours to complete due to its rugged terrain.

“So the brief to the engineers has been pretty simple from the beginning, it’s been – Rubicon Trail, you have one day and a half and you have enough juice to get to the next town to charge it,” Meuiner explained. “On top of that we’re working on solar-generated charging stations that we’ll put on the trail. While heading into the wilderness may seem like a reckless idea in an electric vehicle, Jeep is working to install remote EV charging stations around the US and has plans to bring the program to Australia.

“We’ll have 18 trails in the US, which will be the ‘Badge of Honour’ trails which you get a badge when you make it and you can stick it on your car,” he said. “All these trails will be equipped with charging stations and I’m pushing the other regions, including Australia, to do the same. Now that we have all these other products coming in I’m going to push harder and it’s going to happen.”

Meuiner believes the potential for Jeep’s 4xe electrific and plug-in hybrid models in off-road settings is even greater than petrol or diesel models, with the electric motors providing instant torque that makes low-speed manouvering easier as well as other benefits.

“Trail rating is going to stay and it’s going to be even more stringent,” he said. “We’re going to push the limits of what we can do. The Recon is going to be Trail Rated ‘six’ which will make it Rubicon Trail. Wrangler [4xe] is ‘10’, so the king remains the king for now and forever.”

He added: “With electric, the Wrangler is unbeatable. You put big tyres on it, a lift kit on it, you’re unbeatable.”

Despite this push towards electrification Meuiner wasn’t optimistic about the chances of getting the Wrangler 4xe to Australia, but left the door open.

He said: “I pushed really hard to get the Wrangler 4xe in Australia and in the UK. The business case was not conclusive, does that mean it’s not going to happen? I don’t know.”

Unfortunately, he also ruled out any chance of a V8-powered Gladiator ute becoming available down under, but did confirm it will join the 4xe range.

“V8 is not the future,” he said. “I’m driving a Grand Cherokee 4xe at the moment… this thing drives like a V8 or better.”

He added: “Gladiator will be electrified too.”

But at the same time the brand will push towards and electrified future for Jeep without losing its rugged, go-anywhere image, the American brand will expand its range into the premium space with the introduction of the Wagoneer S.

This new model will be the first all-electric model to wear the Wagoneer nameplate, which is positioned at the top of the Jeep line-up as a wouldbe rival to the likes of Range Rover, Mercedes-Benz and BMW.