Is this the world’s coolest Volvo?

Is this the world’s coolest Volvo? What do you get when you combine a championship-winning World Touring Car team with an iconic Swedish coupe? The answer is the Volvo P1800 Cyan.

Before the brand became synonymous with boxy-but-safe sedans and SUVs, Volvo produced the sleek and stylish P1800 Coupe between 1961 and 1973. Now, Cyan Racing, the race team formerly known as Polestar that’s responsible for Volvo’s 2017 WTCC title (as well as helping the company’s Supercars project with GRM), has given the car a modern makeover.

With Cyan Racing now focused on its WTCC program with Chinese brand Lynk & Co. (which is also owned by Volvo parent company Geely), CEO and founder Christian Dahl wanted to create a tribute to his time working with the Swedish brand.

“Our company was founded in 1996 to race Volvo cars in Sweden and the Volvo P1800 Cyan is closing the circle for us,” said Dahl.

“We claimed our first world title with Volvo in 2017 and have since then won two further world titles with two other manufacturers. The first world title was a milestone for us, and we felt it was a good time to reconnect with the past and to those before us racing Volvos. The first Volvo P1800 Cyan carries our blue and yellow racing colours to mark our heritage.” 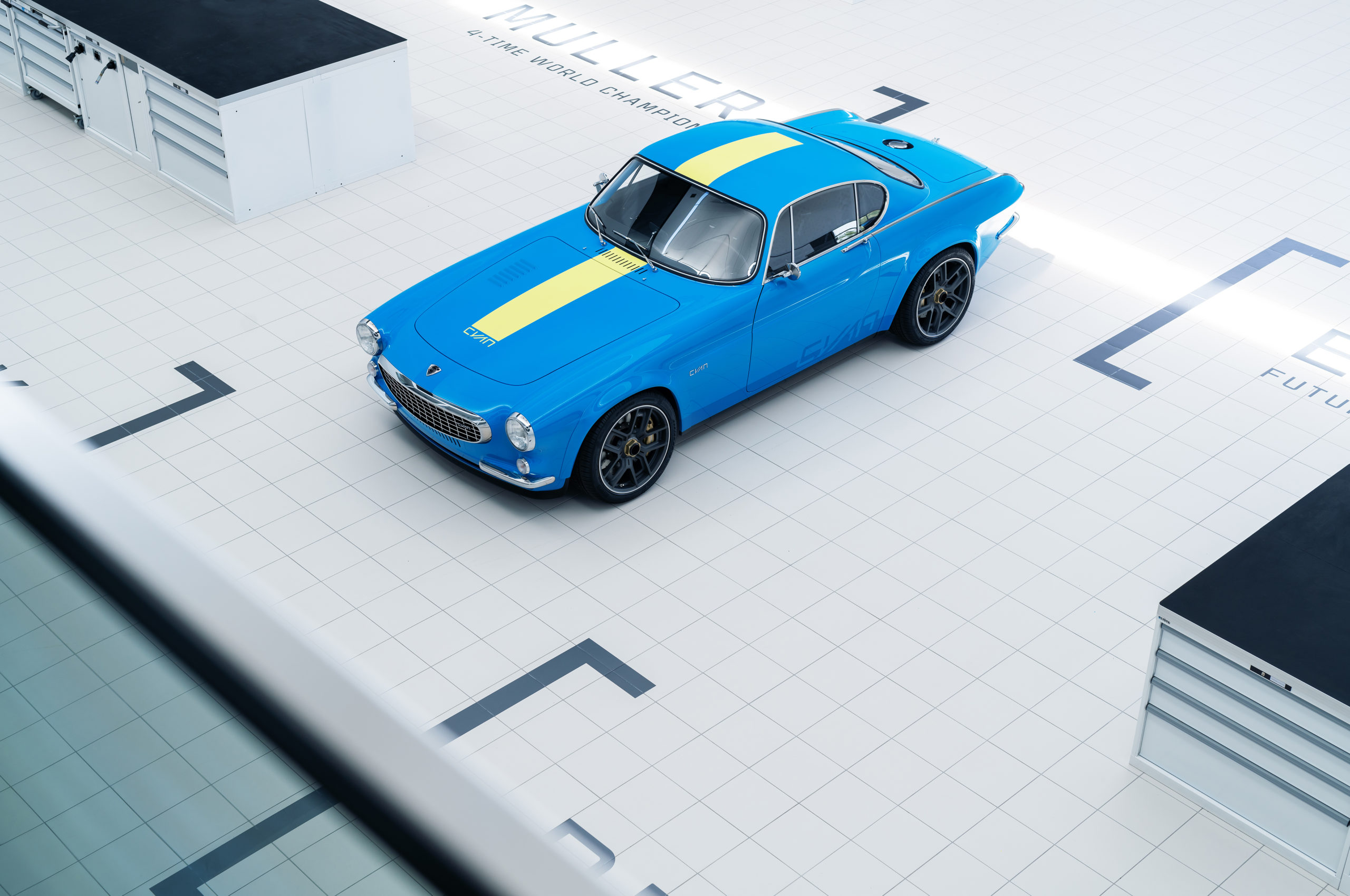 After a prototype of this car was spotted at Germany’s Nurburgring recently there was speculation that Volvo was going to produce an electric version of the car as a retro tribute, but the reality is very different. Instead, the P1800 Cyan has large pieces of the 2017 WTCC title-winning S60 underneath its classic looks.

“Obviously we could have built an electric Volvo P1800 filled with all the latest technology, comfort and luxury. But that was not what we wanted,” explained Dahl.

“Amid this paradigm shift we decided to slow down time and freeze a part of it in our own time capsule. To take the best from the golden ‘60s and combine it with our capabilities of today, keeping a pure yet refined driving experience.”

The P1800 was launched around the same time as the Jaguar E-Type, Ferrari 250 GTO and the first Porsche 911, all three of which have evolved into modern cars. So Dahl used that as inspiration to ask ‘what would a 2020 P1800 look like?’

The team started from scratch, increasing the torsional rigidity of the body by adding high-strength steel and carbon fibre, whilst simultaneously adding a wider track, larger wheel arches and a repositioned greenhouse. The result is a car both stronger, stiffer and still weighing just 990kg.

Mattias Evensson, Project Manager and Head of Engineering at Cyan Racing, explained the thinking behind the changes.

“The basis for a precise and intuitive driving experience is a solid body structure. Cars from the ‘60s are far from ideal when it comes to this due to weak points and steel quality that allow for flex,” said Evensson.

“We have redesigned the structure of the original shape and strengthened weak points in the chassis through triangulation, using high-strength steel and integrated the carbon fibre body with the chassis structure. Instead of an electric motor Cyan has opted to install a version of the WTCC-winning 2.0-litre four-cylinder turbocharged petrol engine under the bonnet on the P1800. But it wasn’t a simple choice, with Cyan also considering an updated version of the original motor, the company’s famous five-cylinder engine and modern inline-six before opting for the latest technology.

Cyan is no stranger to this engine having first begun using it in motorsport with its 2011 C30 WTCC entry and developing it into the championship-winning engine for the 2017 S60 TC1.
For the P1800 it has been built to make 313kW of power and 455Nm of torque, but has also been tuned to produce its performance in a more linear fashion than a typical turbo motor and rev to 7700rpm.

“It is an engine that provides us with a strong mechanical base and a very efficient combustion system. We have adapted it to suit the Volvo P1800 Cyan with the power output increasing through the entire powerband,” Evensson said.

“The power peaks late. It is designed for high revs a lot, with the torque intuitively linear to the pedal. We have learnt from racing where the drivers want perfect control of the torque, increasing precision and driving pleasure at the same time.”

The engine is paired with five-speed manual transmission from Australian specialists, Holinger

Cyan has also given the handling package a major upgrade, starting with a rear-end suspension set-up that swaps the original live-rear axle with a independent system designed by the team; that also incorporates a torque-biasing limited slip differential. 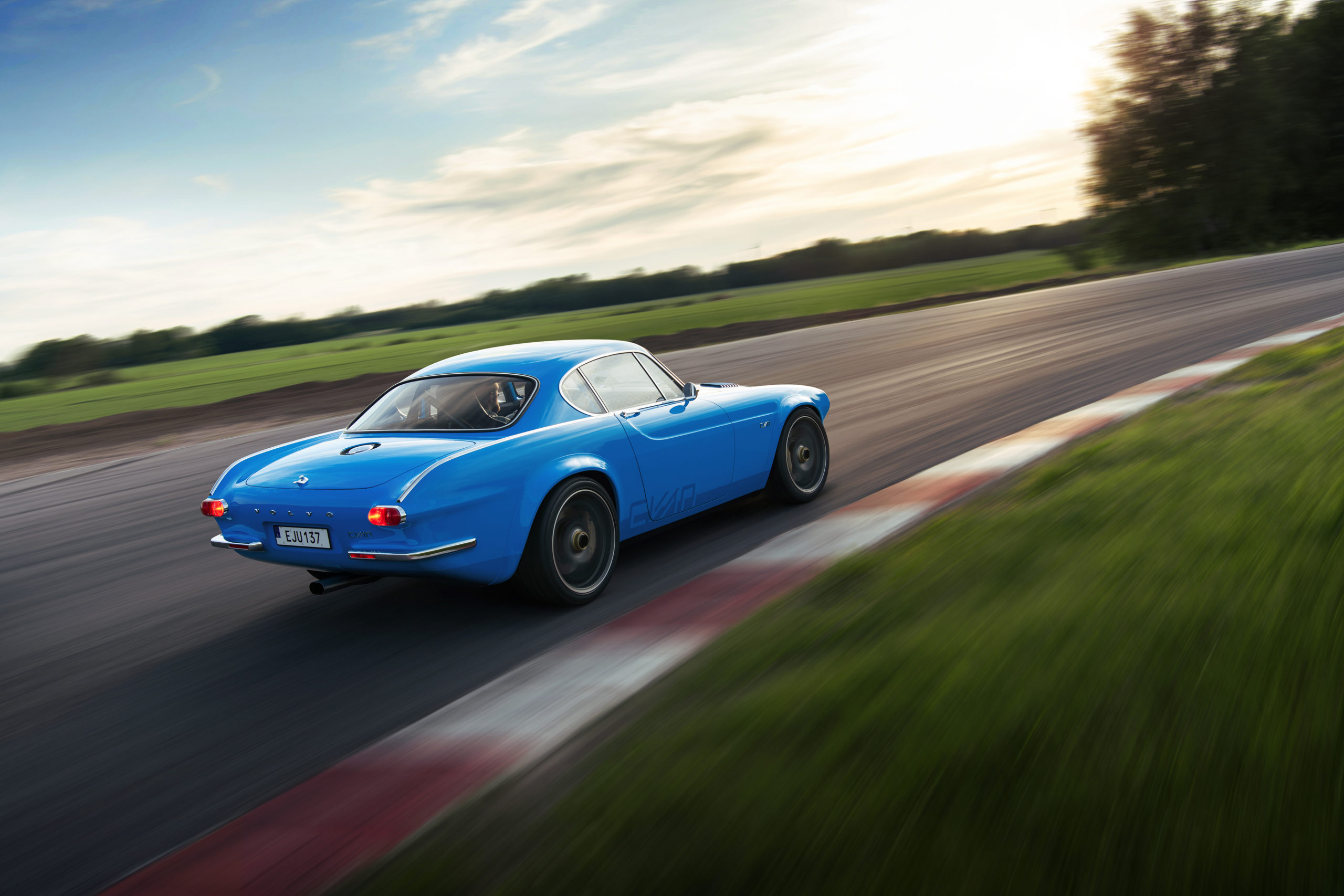 Both the front and rear suspension have been overhauled with modern technology including two-way adjustable dampers, aluminium uprights and double wishbones. Braking has been upgraded too with four-piston AP Racing calipers, but Cyan has opted against modern touches including ABS and brake booster in order to provide a classic feeling.

Cyan Racing drafted in its WTCR ace and 2017 WTCC champion Thed Björk to help tune the handling package of the car – with maximum enjoyment the priority over outright lap speed.

“We are really satisfied with the level of grip and precision that we have achieved from the chassis in combination with a responsive steering,” said Björk.

“The car goes where you point it. You can be brutal going into a corner and still find your apex and exit within millimetres.

“The settings of the car are not aimed at fast lap times but rather to deliver an enjoyable and exciting driving experience. I feel my smile widening each time that I control the drift angle of the car through a long turn.”

The company is offering the P1800 Cyan to customers, with pricing and specifications able to be customised by each owner.