Hate hybrids? The new Mercedes-AMG GT 63 may change your mind

Hate hybrids? The new Mercedes-AMG GT 63 may change your mind This latest addition to the AMG line-up is the first to feature its E Performance powertrain that uses F1 technology to both boost power while also reducing fuel consumption. Under the bonnet is the same 4.0-litre twin-turbo V8 as before, but it’s now backed up by an electric motor on the rear axle that takes performance to new heights. Philipp Schiemer, chairman of Mercedes-AMG, said the company was determined to forge its own path in order to maintain its performance expectations even as the world demands more fuel-efficient cars.

“With the new Mercedes-AMG GT 63 S E Performance we are transporting our brand DNA into an electrified future,” Schiemer explained. “In doing so, we are following our own technical path, which is what has always made AMG so special and desirable. Developed entirely in Affalterbach, the performance hybrid offers a fascinating level of driving dynamics and rightly bears our new technology label E Performance. With this new concept, we are also opening up to new target groups who will experience Mercedes-AMG as the performance luxury brand of the 21st century.” 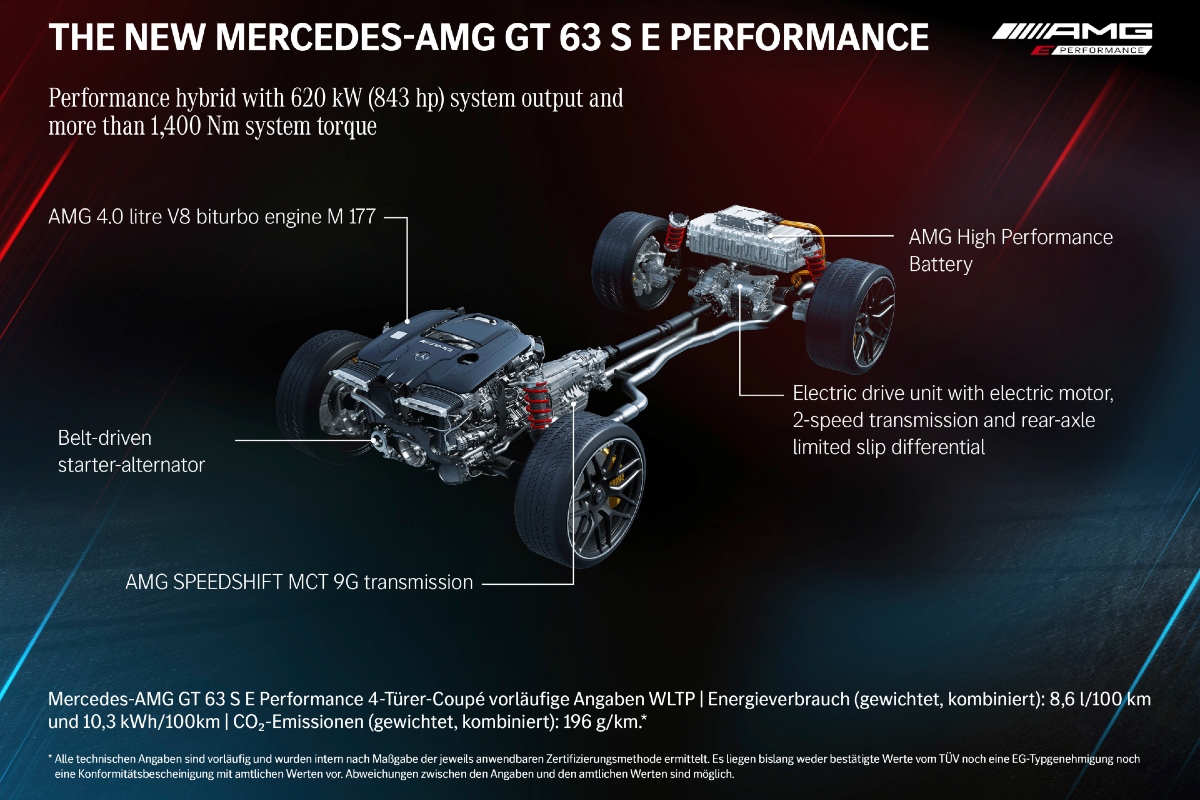 The key to E Performance is the electric motor and battery pack that borrows F1 knowledge to extract maximum performance. The electric motor is positioned on the rear-axle, integrated with a two-speed gearbox and electronically controlled limited-slip differential. It produces 70kW the majority of the time, but can jump to 150kW for 10 second bursts.

The batteries are relatively small, offering only 12km of electric-only driving range, but according to AMG “the battery is specifically designed for fast power delivery and draw”, which is taken directly from F1.

According to AMG’s announcement on the car, the hybrid system uses an F1-style ability to recuperate energy and deploy it quickly when the driver needs a surge of acceleration, saying: “The electric power can always be called up and frequently reproduced via high regeneration performance and on-demand recharging. The independent battery concept enables the optimal compromise between maximum driving dynamics and contemporary efficiency.”

More details on the AMG GT 62 S E Performance will be revealed closer to its Australian launch in 2022.