Has this F1 legend created the world’s best driver’s car?

Has this F1 legend created the world’s best driver’s car? The McLaren F1 is considered by many to be the best supercar ever made. The man who designed it believes he’s just surpassed it in every way.

Gordon Murray, the designer of Formula 1 championship-winning cars for Brabham and McLaren, has unveiled his latest masterpiece, the Gordon Murray Automotive (GMA) T.50. Having teased elements, including the highly-advanced aerodynamics and purpose-built engine, Murray has taken the wraps off the full design of his all-new supercar.

Like the McLaren F1 the T.50 is a three-seater supercar, with the driver sitting in the middle of the cabin with a passenger each side, powered by a V12 engine, but Murray claims it’s better because it benefits from three decades more experience designing cars and the technological advancement in the industry.

And instead of focusing on setting lap records and top speed runs, Murray says the sole focus of the T.50 is to be the ultimate driver’s car – engaging and free from complexities. Gordon Murray in his GMA T.50

“Just 100 customers will share my vision, a car created to improve on the F1 formula in every conceivable way,” Murray explained. “With 30 years of technological and systems advancement, now, the time is right to design the greatest analogue driver’s car. I believe no other company could deliver what we will bring to market in 2022, producing this British supercar will be my proudest moment.”

While there’s a family resemblance between the McLaren F1 and the T.50, this new car has been designed entirely by Gordon Murray Automotive; his own design and engineering company established since leaving McLaren. He claims every element of the car is “100 per cent bespoke and crafted by a British company that leads its field.”

The basic specifications of the T.50 are brilliant in their simplicity – a custom-made Cosworth V12 engine paired with a six-speed manual transmission, that sends power to the rear wheels, and housed within a lightweight carbon fibre chassis. The engine makes 485kW of power, which is well down on many modern supercars which boast more than 600kW, but the entire T.50 weighs just 986kg; that’s only 26kg heavier than a Mazda MX-5. 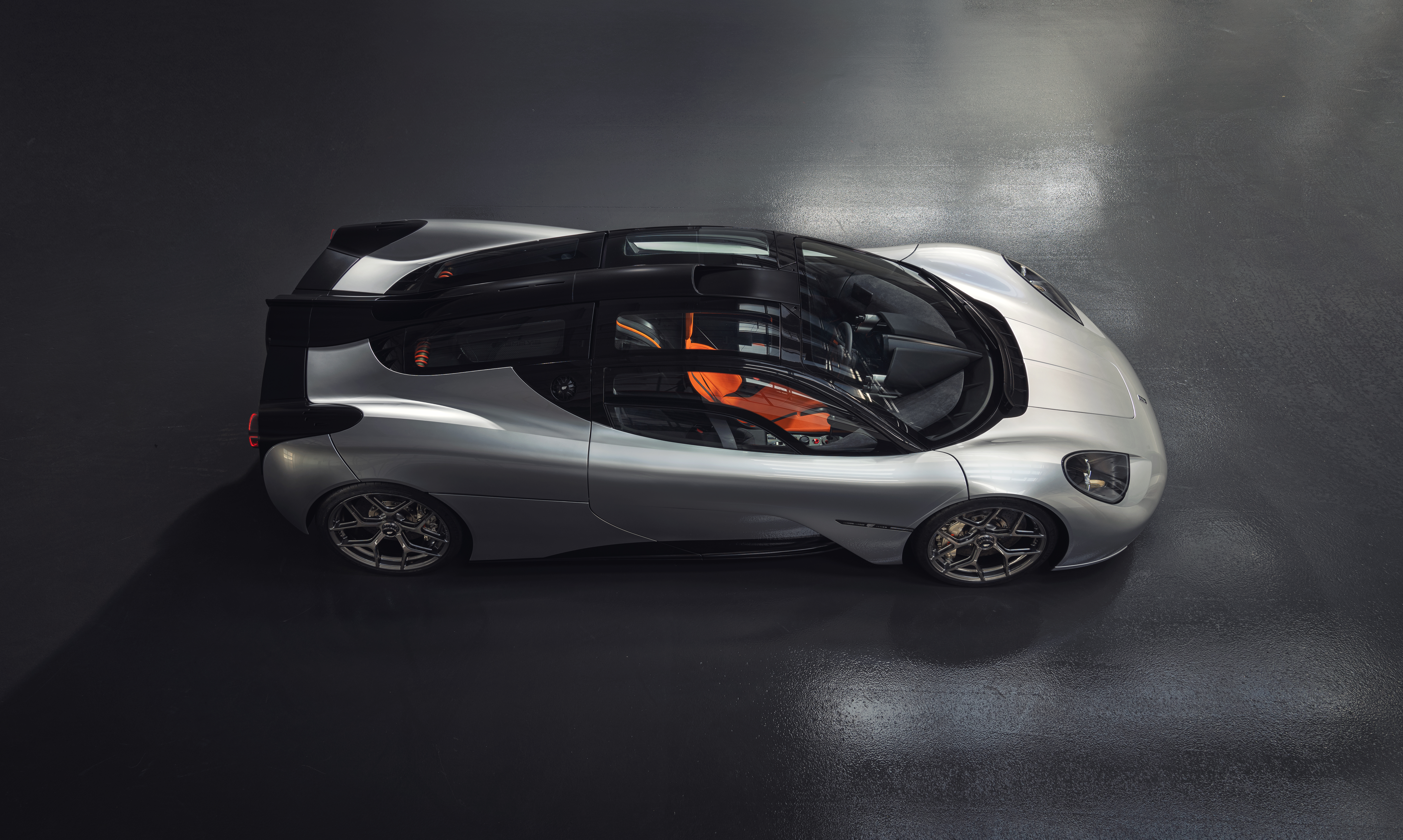 Murray believes that the lightweight nature of the car – which informed every design decision – is the key to the car’s performance.

“With the design of our T.50 supercar, we are taking the same focused approach that was applied to the design of the McLaren F1,” he explained. “Thanks to modern materials and 30 years of development, we have been able to deliver a far better all-round car in the T.50, while setting its weight at just 986kg, a full 150kg lighter than the F1.”

The engine itself is a special creation, a collaboration between racing specialists and GMA, because Murray insisted on a naturally-aspirated engine because while turbochargers had performance, they also come with lag and complexity.

The GMA T.50 is powered by a Cosworth-built V12

In order to maximise both the performance and the sound of the V12, GMA has evolved the ‘Direct Path Induction Sounds’ system first used on the F1. It uses a cold-air ram induction on the roof, just above the driver’s head, to force air into the engine but also acts as a “loudspeaker” to amplify the engine noise for the occupants.

With so much work gone into creating a bespoke engine, Murray wanted to show off the “Cosworth GMA V12” so he refused to put on an engine cover, instead the powerplant is housed underneath a twin-gullwing bonnet that has windows so that you can see the cam covers, exhaust manifolds and inlet trumpets whenever you want.

In another move that speaks to Murray’s priority of driving enjoyment over pure speed, the X-trac six-speed transmission is a classic H-pattern layout; instead of a modern, faster paddle-shift system. Murray signed off personally on the exact motion and weighting on the gear lever in order to ensure it was just right.

But while the mechanical layout of the T.50 is relatively simple and pure, Murray’s reputation as an aerodynamic master in Formula 1 has led him to create an incredibly complex and radical aero system for the car. There are six distinct aerodynamic modes for the T.50 – Auto, Braking, High Downforce, Streamline, Vmax and Test. However, unsurprisingly, the man hates complex and unsightly wings because he wants to keep the surfaces of the T.50 simple and clean. So he has returned to an old design he made famous at the 1978 Swedish Grand Prix – the Brabham BT46B ‘Fan Car’ that Niki Lauda raced.

The Brabham used a snowmobile fan to extract air from underneath the car to generate consistent downforce. While banned in F1 ever since, Murray has used the same concept on the T.50, installing a 400mm fan at the rear of the car that’s powered by a 48-volt electrical system.

That allows the T.50 to generate the vast majority of its downforce from underneath the car, which is more consistent than air that comes over the top of the car which can be ‘dirty’ or disturbed. Murray claims the fan helps to increase downforce by 50 per cent while also reducing drag by 12.5 per cent. The GMA T.50 uses a fan at the rear to help generate downforce

GMA will soon begin real-world testing of the T.50, starting with a prototype mule car to test the engine in the back of a British Ultima kit car; fittingly because that’s how McLaren first began development of the F1 back in the early 1990s.

Prototype T.50 will be running before the end of 2020 before an extensive test program runs throughout 2021 with first deliveries of the T.50 to customers beginning in January 2022. Despite an asking price of £2.36m (approx. $4.3m) Murray is confident it will be a sell-out and is hoping that owners will drive the cars regularly; rather than keep them in a collection or museum.

After the 100 road cars are made, Murray has confirmed he will build 25 track-only versions of the car and hopes to take it racing in the future if a suitable category can be found.