To the right of me I can see the road keeps climbing to the summit. To the left I see an abyss – seemingly a 3500 metre drop to the depths below.

Welcome to the Pikes Peak Highway – home of the world famous hill climb, which is one of the most amazing, challenging and exciting roads I’ve ever driven.

I’ve always loved this road from afar, ever since, like so many racing fans, I saw the epic ‘Climb Dance’ featuring Ari Vatanen wrestling his Peugeot 405 up the gravel road to the summit of ‘America’s Mountain’ – as it’s known locally.

A recent trip to Denver, Colorado gave me the opportunity to make the roughly 90-minute drive south from the state’s capital down to Colorado Springs and then to the nearby entrance to Pikes National Forest.

The first thing to note is that if you’re looking to live out your Vatanen fantasy or try and re-create Seabstain Loeb’s stunning run in his Peugeot, think again. Pikes Peak Highway is a public road and is full of traffic throughout the year, so you’ll almost certainly find yourself stuck behind a tourist driving slowly and enjoying the beautiful view.

Another thing to note, is the hill climb course only takes in part of the road. The hill climb run measures 19.9km, but the entire highway – from entrance gate to summit – is 31km.

The combination of the extra length and tourist traffic means there’s no chance you’ll be getting close to Romain Dumas’ 7:57sec record pace. Instead, they recommend you plan to spend between two and three hours climbing then descending the mountain safely. That may sound like a long time – it certainly did when we rolled through the entrance arch – but it turned out to be spot on.
Especially when you consider you are literally climbing a mountain. Pikes Peak’s summit is 4302-metres above sea level, while Australia’s Mt Kosciusko is roughly half that at just 2228m. That means things like altitude sickness and severe weather are both elements you need to factor into your visit. 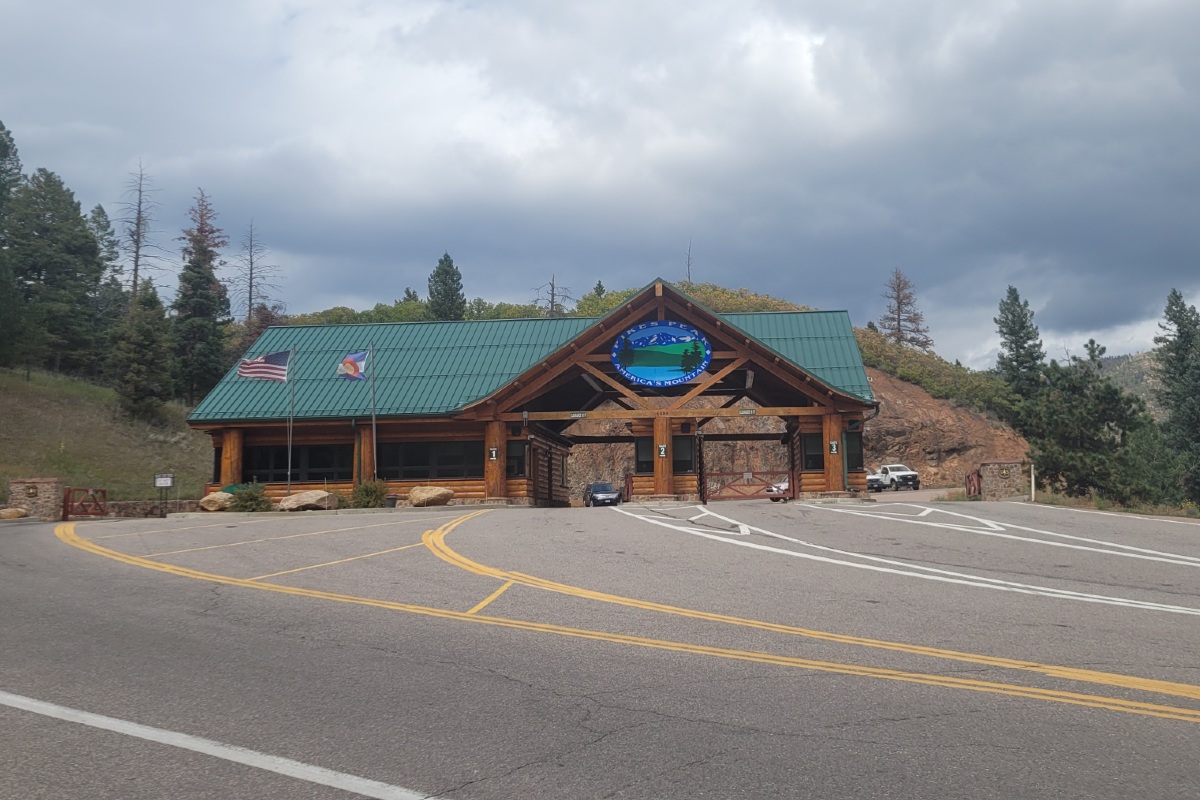 Pikes Peak entrance at the bottom of the mounatin

The park authority that looks after the road recommends you don’t take babies under six-months up the road or anyone with cardiac or respiratory issues. Drinking lots of water and taking ibuprofen or aspirin is advised to help combat the dehydration that leads to altitude sickness.

And obviously taking the right car, in good working condition, is another very good idea because this is not the road to find out your brakes or engine haven’t been properly maintained. Fortunately, Torquecafe opted for the premium rental car in Denver and got a BMW 530i xDrive, plenty of power, handling and all-wheel drive traction.

It costs $15 per adult to enter the highway, but it’s worth every cent. As soon as you’re through the entrance you’re greeted with the stunning tree-lined scenery that covers much of the highway. Keeping your eyes on the road is obviously important but it can be challenging at times as Colorado is incredibly picturesque in general but Pikes Peak is particularly stunning.

While the road is famous for the hill climb to car fanatics, for others Pikes Peak’s other claim to fame arrives just after the three-mile mark when you find the ‘Big Foot Crossing.’ Yes, that’s right, Big Foot – the mythical creature that supposedly roams the mountains of America – is reportedly a common ‘sight’ in Pikes Peak so you need to keep your eyes open…

Assuming you avoid Big Foot you’ll soon find yourself at Crystal Reservoir, the first of three visitor centres/gift shops where you can take a break or pick up a souvenir. But not long after Crystal Reservoir, around the seven-mile mark, is the official start line for the hill climb.

From here you really start to feel the road climb, which is remarkable because the entrance to the road is already higher than the summit of Mt Kosciuszko. Anyone who has watched onboard footage from the hill climb over the years will start to feel at home. It’s a remarkable stretch of road, sweeping through the terrain of the mountain with a fantastic combination of fast bends and hairpins. 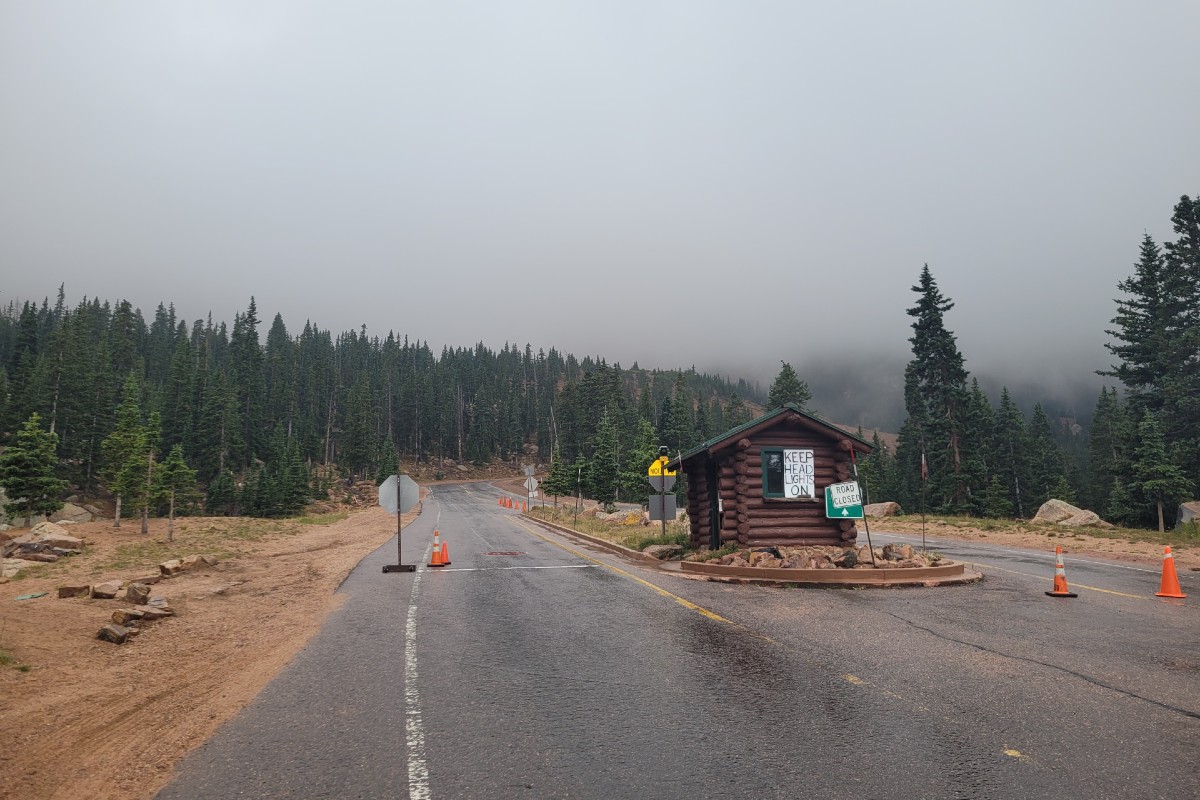 By the so-called ‘Halfway Picnic Grounds’ you’re already at more than 3000m above sea level and the road keeps climbing. When you reach Glen Cove, which Pikes Peak fanatics will recognise for its gate house that controls access to the upper section of the mountain, you’re at nearly 3500m and climbing above the tree line and into what’s known as the Alpine Zone.

On the way back down you need to stop at the Glen Cove gate house to have your brake temperature checked, ensuring it’s safe for you to keep descending the mountain.

It’s here that the road really changes, moving from picturesque and enjoyable to something that really requires your focus. Especially on the day we visited, because a storm happened to roll in as we climbed and at this altitude the storm doesn’t rain down on you – you’re in the clouds.

It’s at this point that we began the story, because it’s just after Glen Cove that the drops off the road become quite dramatic and those uneasy with heights will begin to feel a knot in their stomach.

This is the most challenging part of the mountain, with corners named ‘Double Cut’, ‘The Switchbacks’ and ‘Devils Playground’, but on the day we visited the weather made it even more difficult. The clouds moved in and cut visibility to just a few metres ahead of the bonnet at times, meaning anything less than absolute concentration could have you making a very long tumble down to the bottom of the mountain 3800m below. 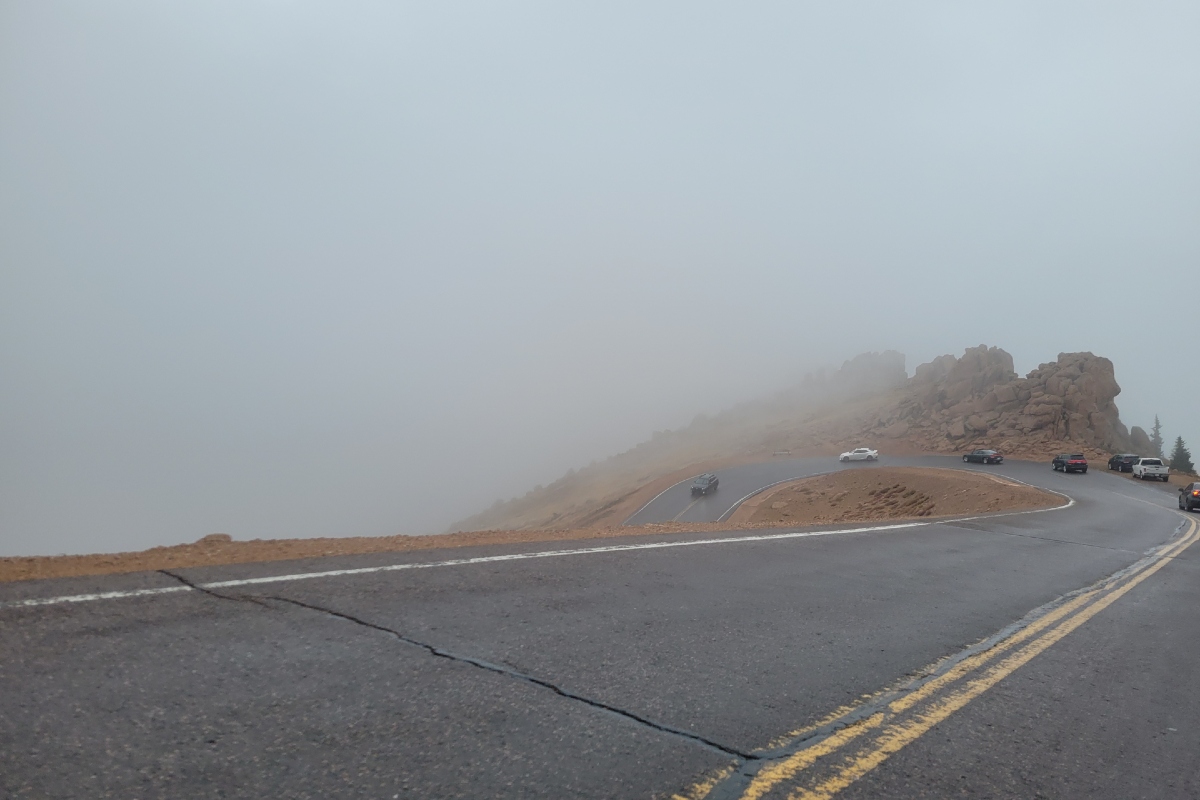 Pikes Peak hit by fog near the summit cut visibility

While there is final car park and turnaround at the 16-mile mark, for any true Pikes Peak pilgrim there is no option but to keep pushing on to the top, regardless of how challenging the conditions are. By the time Torquecafe made the summit at 4302m (14,115ft) the sunny 20-degree weather at the bottom had given way to a near-freezing three-degree fog.

While this meant we couldn’t enjoy the panoramic views that reportedly allow you to see all the way back to Denver and inspired the famous song, America The Beautiful, it was still thoroughly worthwhile making the full journey all the way to the top. It’s a must for anyone who has ever watched the hill climb and wondered what it takes to make it all the way to the peak.

While I always had the utmost respect for any driver who took on the challenge of the Pikes Peak Hill Climb, having experienced the same piece of road (sometimes at walking pace with the fog) that respect level has risen even higher.

This truly is one of the greatest stretches of tarmac in the world and the ultimate test of driver and machine. For any real petrolhead, a Pikes Peak pilgrimage is a must.