Legendary Formula 1 designer Gordon Murray has unveiled a fitting tribute to a legendary F1 driver. Murray has taken the wraps off the track-only version of his T.50 supercar, calling it the T.50s Niki Lauda.

Murray worked with Lauda during his time at Brabham, so Murray chose the late Austrian’s birthday as the launch date for his latest Gordon Murray Automotive (GMA) creation, unveiling it online overnight from his UK headquarters.

“The T.50s is named in honour of Niki to commemorate his famous win with the Brabham BT46B fan car in the 1978 Swedish Grand Prix,” Professor Murrary explained. “Niki was a great racing driver and he was also a good friend and it is absolutely fitting that we are launching the T.50s Niki Lauda on his birthday. Niki would have appreciated the innovation and engineering detail in our car.”

Murray also sought and received the blessing of Lauda’s family for the new car.

“We are proud that Gordon Murray Automotive has named its new car after Niki,” said the Lauda family in a statement. “He would have been extremely honoured to have been associated with a car designed and engineered by Gordon, with whom he had such a long association and friendship.”

READ MORE: Check out all the details of the GMA T.50

The goal for the T.50s was relatively simple but grandiose – create an “on track experience like no other car to date” that would “define its era”. In the same way the T.50 was designed to be the best driver’s car on the road – with its lightweight construction, free-revving naturally-aspirated engine and central driving position – Murray wants the T.50s to be the most enjoyable track car money can buy. “The T.50 is the ultimate road-going supercar, but I always dreamed of taking it one step further… to build a version that will deliver an ontrack driving experience like no other car in history,” he explained.

Murray added: “We had no interest in achieving the ultimate lap time or creating an over-tyred and over-downforced spaceship at the expense of driver involvement, because ultimately you have to possess an F1 driver level of skill and fitness to get the best out of them.”

“Instead, I laid out some parameters to create the ultimate driver’s car and experience on track: a central driving position, a V12 just behind your ear revving to over 12,000rpm, producing over 700-horsepower (560kW) and with an even faster response time than the T.50, downforce limited to 1500kg and a weight of under 900kg. Plus the ability to turn up at any track, make a few basic checks and have fun, without the need for an entire support crew.”

The specifications of the T.50s Niki Lauda make for some stunning reading. As he targeted, the 3.9-litre V12 engine makes 540kW (725hp) thanks to a new RAM air-intake, and the overall weight of the car has been kept to 852kg; a whopping 134kg less than the ‘regular’ T.50. That means the T.50s has a power-to-weight ratio of 614kW/tonne better than an LMP1 car.

Without road regulations to worry about, the Cosworth-built engine now breathes through a straight-through exhaust that the company claims makes it “one of the greatest and most characterful sounding cars ever made.” It sends its immense performance to the rear-wheels via a six-speed paddle-shift transmission built by racing gearbox experts, Xtrac. This replaces the six-speed manual ‘box in the road-going T.50. GMA will offer the T.50s with two sets of gear ratios, one that can deliver a top speed of more than 320km/h and another that are closer for better response of shorter circuits.

While based on the T.50, Murray and his design team have developed a completely new body for the T.50s Niki Lauda, with not a single panel carried over between the road and track versions.
However, the unique 400mm fan that helps generate stable downforce remains, now working with a larger rear diffuser and fixed rear wing. There’s also an LMP1-style central fin running down the back of the car from the roof-mounted airbox. At the front there are new barge boards and a new splitter with dive planes to generate suitable downforce. Murray admits they actually reduced the downforce the car could generate, from a possible 1900kg to 1500kg, to make it “more manageable” for drivers who aren’t used to high-downforce track cars.

The T.50s gets a unique suspension set-up that is 87mm lower at the front and 116mm lower at the rear. The springs, dampers and anti-roll bar have also been re-tuned for track performance with no consideration for open road driving.

Inside the cabin Murray’s trademark central driving position remains, but there’s only a single passenger seat available (or can be optionally deleted if you don’t plan on taking your friends for a ride) on the left-hand side. The right-hand side seat has been removed and replaced by a fire extinguisher system and a switch panel. 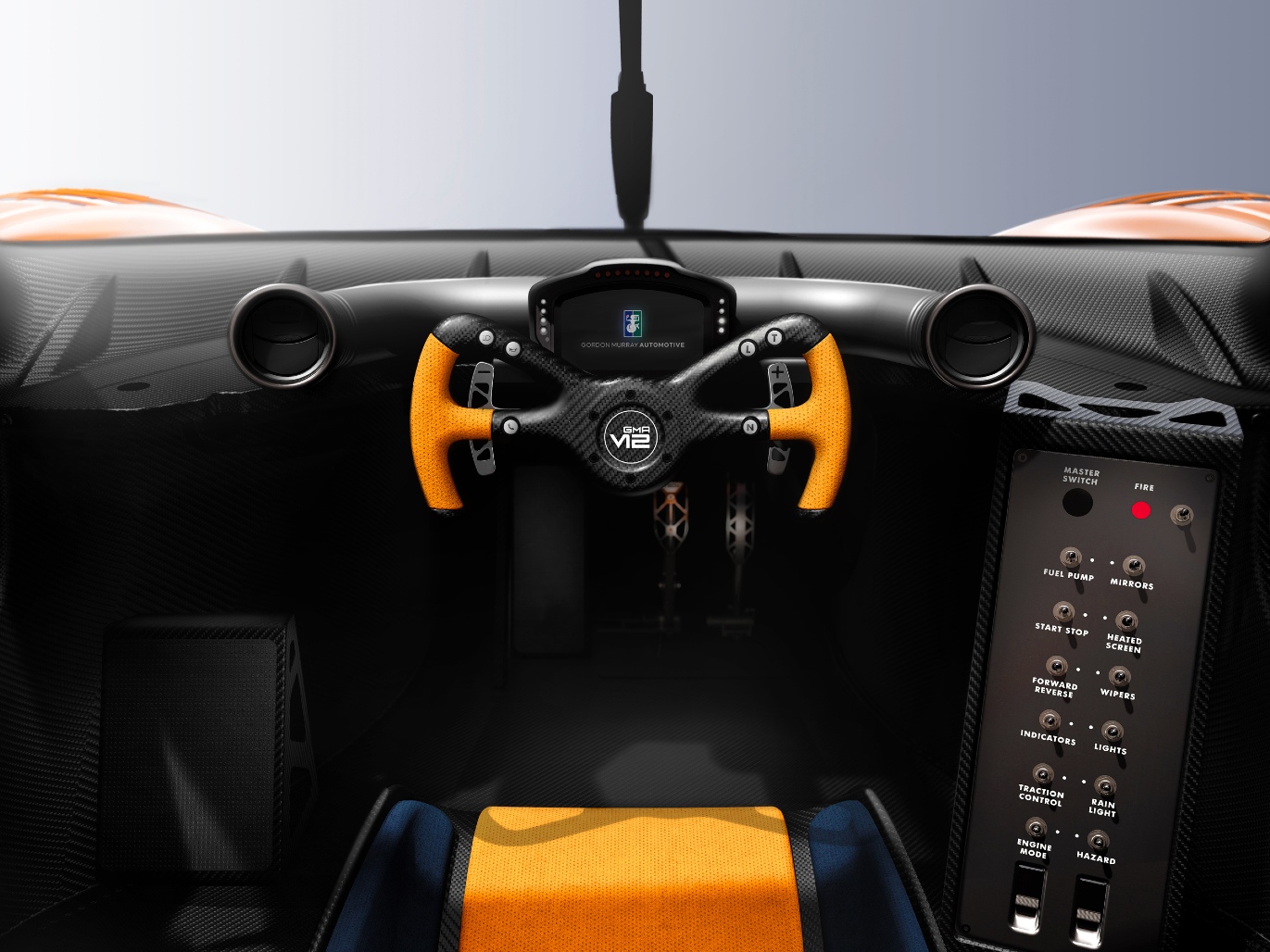 The steering wheel is “a lesson in simplicity” according to Murrary, slim and rectangular in shape it only has the essential buttons (traction control, launch control, radio and neutral) to meet the designers exacting standards.

“I used to make my drivers take their watches off, partly for weight, but also because it adds to the steering inertia,’ Murray explained “Big wheels with lots of switches are quite heavy from a steering inertia point of view, so for the T.50s I wanted to keep the wheel small, clean and simple.”

GMA will only build 25 examples of the T.50s Niki Lauda, with each set to be made to the buyer’s personal taste. Not only that, but each of the 25 chassis will be named after an F1 win from Murray’s career; the first chassis will be called Kyalami 1974, which Carlos Reutemann won in the Braham-Ford BT44. In addition, each car will also come with a specially commissioned book about the specific race it’s named after with Murray’s memories of the event.

While Murray has designed the car to be used for private track days, he’s also planning on hosting specific track day events for those lucky enough to buy one of the 25. And while his goal is to make it able to be run alone, GMA will provide track support to any owner who wants it.

“It was essential to me that the T.50s Niki Lauda is easy to live with and enjoy,” Murray said. “You will own the car, you will be completely in control of where and when you enjoy it. My vision is that owners will take it to a circuit, check the tyre pressures, climb in, fire it up and have fun. That’s the way it should be.”

Murray is also working on a possible Le Mans hypercar entry with the T.50 and says he’s in discussions with GT sports car racing czar Stefan Ratel about a possible ‘GT1 sports club’ for similar track-only supercars with a view to a future racing category.