Inspired by the Baja 1000 the original off-road performance ute is back with an all-new model.

Ford has taken the wraps off the new F-150 Raptor, unleashing a pick-up with off-road racing technology and toughness to tame any surface at speed; dubbing it the Desert Predator. Whether it’s racing across the sand dunes or crawling across rocks, the F-150 Raptor has been designed to handle anything the desert can throw at it.

Typically the engine is a big deal in a performance car, but in the case of the F-150 Raptor it’s what’s underneath that really matters. Built on a high-strength steel frame the Raptor gets an upgraded suspension package to make it more capable than ever before.

The new shock absorbers are the largest-ever fitted to a production Raptor and use Baja-derived knowledge to adjust the response of each shock on the move. The Live Valve system allows the Raptor to change damping rates at each corner up to 500 times per second

“Raptor is rooted in Baja 1000 racing, and its suspension advances our capability and performance – a five-link rear setup with more wheel travel than any Raptor before it,” explained Carl Widmann, Ford Performance chief engineer. “And like a trophy truck, every aspect of Raptor has been engineered to deliver precision capability when your foot is flat on the floor, way out in the middle of nowhere roaring across the desert.”

The new Raptor also gets new rubber too, with 35-inch tyres as standard, but for serious off-roaders the blue oval is offering whopping 37-inch rubber for the first time. The BF Goodrich off-road tyres are specially designed for heavy-duty running off the beaten path.

When fitted with the bigger rubber the Raptor has 332mm of ground clearance, a 33.1 degree approach angle, 24.4 degree breakover angle and 24.9 degree departure angle.

If climbing over rocks is your preference the 35-inch tyres are the better pick, as they provide more suspension travel – 14-inches at the front and 15-inches at the rear. 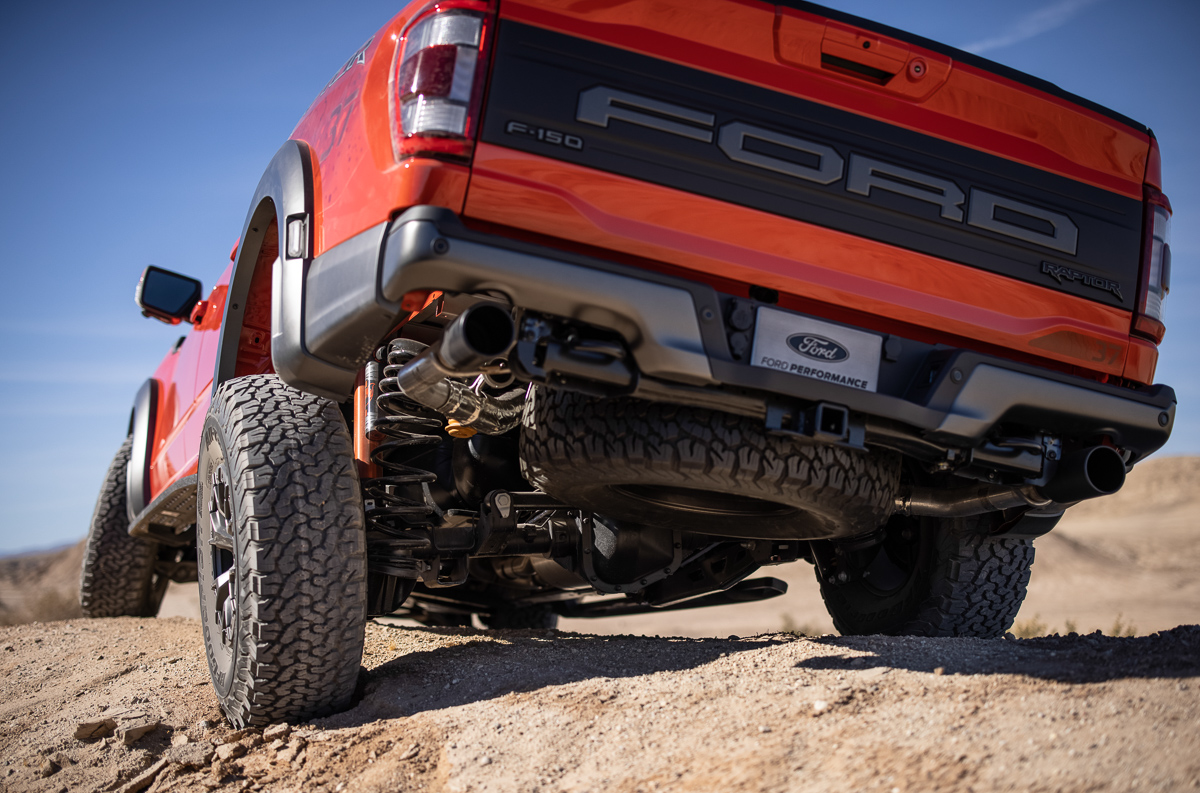 As for what’s under the bonnet, the 3.5-litre EcoBoost V6 carries over from the previous model but the company hasn’t revealed any updated performance figures. The old Raptor V6 twin-turbo made 335kW of power and 691Nm of torque so it should, at the very least, match those numbers. It’s mated to a 10-speed automatic transmission and sends its power to the wheels via an electronic locking rear differential with an option Torsen front limited-slip diff available too.

Ford took the opportunity to confirm one of the worst-kept secrets around the Raptor – the V8 engine is making a comeback.

While the V6 will remain the standard powerplant, the blue oval has confirmed that an F-150 Raptor R is coming in 2022. While Ford didn’t reveal exactly what will power the Raptor R it’s tipped to be the same supercharged 5.2-litre ‘Predator’ V8 found in the Shelby GT500 Mustang.

This is Ford’s comeback to the Ram 1500 TRX, which has become the most powerful performance pick-up with its 523kW ‘Hellcat’ supercharged V8. The Predator makes 566kW and 847Nm which should put the Raptor back on top… at least until Ram responses, or Chevrolet joins the fight.

Will the F-150 Raptor come down under?

It remains to be seen if Ford Australia will be able to add the new F-150 to its local range. The brand has changed its tune over the years, originally adopting a position that it wasn’t necessary given the capability of the Ranger was similar. However, the success of Ram Trucks and now GM Specialty Vehicles with the Chevrolet Silverado has demonstrated there is demand for circa-$100k US pick-ups in Australia.

Ford in the US hasn’t indicated that the new model will be built in right-hand drive, so Ford would likely have to find a local company to put the steering wheel on the right side; as Ram and GMSV do with Walkinshaw Automotive Group.

Conversion company Performax has previously offered the F-150 Raptor locally, so even if the company decides not to do it officially there’s still a chance you’ll be able to get one of these Desert Predators.