With Scott McLauglin spruiking his own Herrod Performance version and Tickford building its own creations, Rick Kelly will be the face of the new Ford Mustang Mach 1 when it arrives in Australia in 2021.

Ford Australia confirmed this red-hot ‘Stang, which is the pinnacle of Ford’s naturally-aspirated V8 range (before the supercharged Shelby versions), will join the local line-up sometime in 2021. Supercar ace, Kelly will be the official ambassador for the Mustang Mach 1 after his Kelly Racing made the switch to the blue oval for the 2020 season after previously running Nissan’s factory program.

“It’s a stunning looking vehicle, but above all it really is a Mustang made for enthusiasts – it is all about how it drives around a track, which is why I’m so pleased to be working on this project with Ford,” explained Kelly. “Racing a Mustang Supercar around tracks like Mount Panorama, where we’ll be this weekend, has been a highlight of 2020 for me, but Mach 1 is such a unique opportunity for fans and customers, so I am pumped for its arrival here next year.” The new Ford Mustang Mach 1 with its predecessors

Ford Australia chose October 14 to announce its arrival, not only because it’s Bathurst week, but because it marks the 73rd anniversary of Chuck Yeager breaking the sound barrier – Mach 1 – the inspiration for the 1969 original.

“Achieving Mach 1 for the first time was a significant human feat,” said Ford Australia CEO, Andrew Birkic. “That spirit and determination to keep pushing, never settling and always trying to go further is what the Mach 1 Mustang was all about – and it’s fitting that we can bring Australian customers, who’ve made Mustang part of our motoring landscape, a 2021 Mustang Mach 1 of their very own.”

The Mach 1 will be only the second US-built special edition that Ford Australia has offered, after the Bullitt version, but both have used the standard V8. Having previously ruled out the Shelby Mustangs and instead partnering with Herrod Performance to produce the only-for-Australia Mustang R-Spec, which featured a supercharger to make more than 500kW.

It’s powered by the same 5.0-litre V8 in the Mustang GT, but it’s tuned to make 385kW of power and 570Nm of torque; up from 339kW/556Nm in the GT. It’s paired with either a six-speed manual transmission, with rev-matching for the first time, or a 10-speed automatic, that’s been specially calibrated and upgraded to match the engine.

Ford has also added a new intake manifold, oil filter adapter and engine oil cooler taken from the Shelby GT350, as well as two side heat exchangers, the rear axle cooling system and lower diffuser from the GT500. 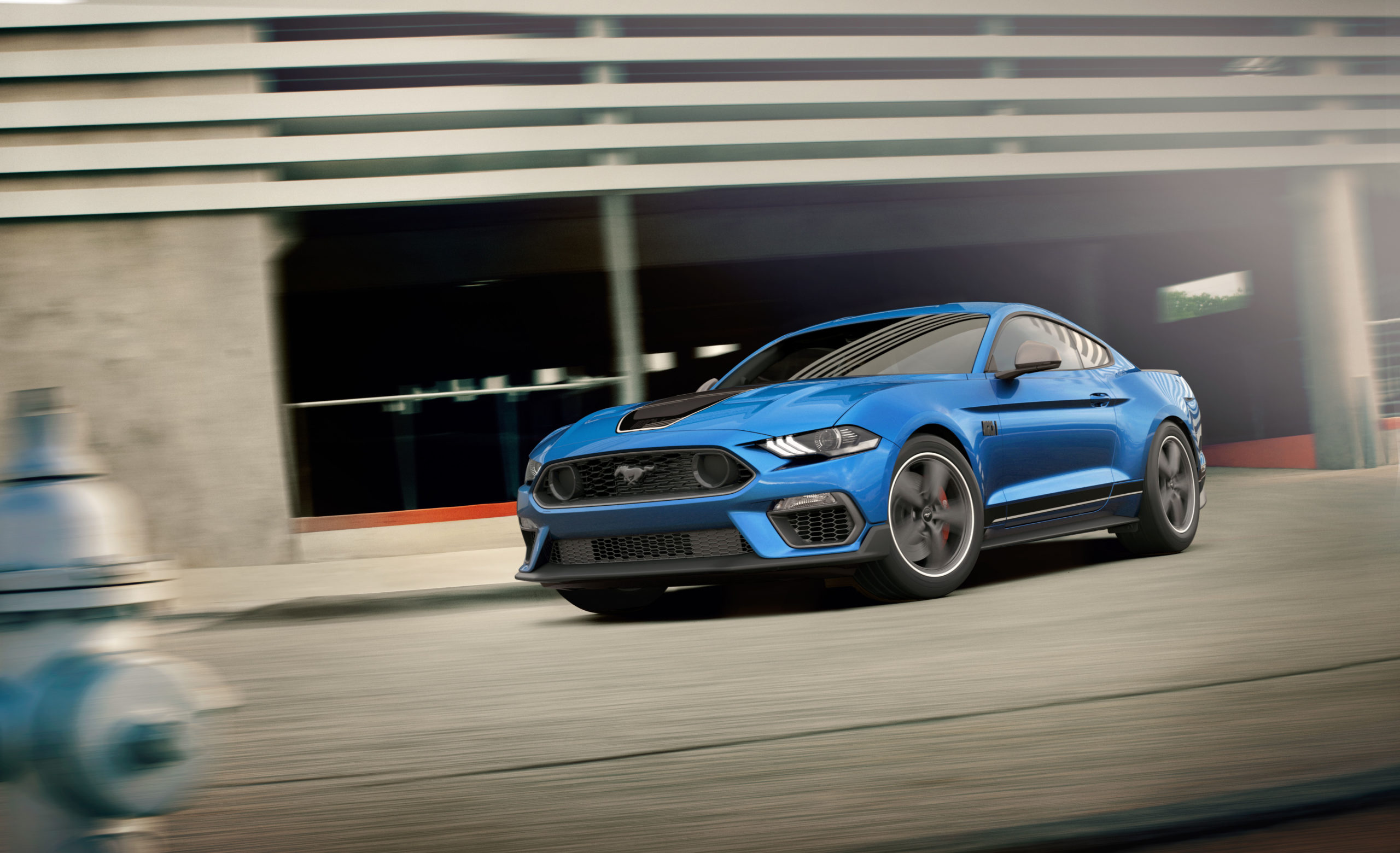 Ford Australia has confirmed final specifications but in the US, the Mach 1 is available with a unique Handling Package (only on the manual). It adds a larger front splitter for increased downforce, new front wheel lip moldings, a rear swing spoiler with a Gurney flap as well as the rear tire spats from the GT500.

However, all Mach 1 models will come with a new underbody pan that is 20-inches longer than the one found on the Mustang GT Performance Pack. Ford claims this is the biggest single aerodynamic upgrade for the car to improve its on-track performance.

The Mach 1 also gets a unique look thanks to a new 3D deep mesh grille with a low-gloss black pony badge as well as two round recesses that are a tribute to the ‘70 Mach 1 which integrated fog lamps into its front-end.

Another unique Mach 1 element at the 19-inch alloy wheels, which are designed as a homage to the Magnum 500 wheels of the classic Mach 1 models.

Full details and specifications of the Mustang Mach 1 will be released closer to it going on sale locally sometime in 2021.