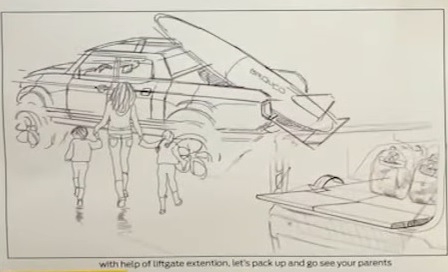 A sketch of a Ford Bronco ute

Ford has seemingly teased a new ute based on the Bronco that could sit alongside the Ranger in an expanded blue oval portfolio.

The company released a video showcasing the efforts the designers went to when reviving the iconic model. One of the processes was lifestyle sketches of various uses for the Bronco, including several that show what appears to be a ute variant.

Given the video is an official Ford product, the appearance of these sketches is no mistake and is a tacit acknowledgement from the company that it is at least considering a Bronco dual-cab ute.

READ MORE: Bronco’s back – here are the details

This fits with other rumours from Detroit that suggest the Bronco family is set to expand beyond the current three-door, five-door and Bronco Sport models. A ute certainly fits within the adventurous image of the Bronco, but given the Bronco is built on the same underpinnings as the Ranger it could mean too much crossover for the brand; which is perhaps the biggest obstacle the new model needs to overcome to become a reality. Ford revealed a series of sketches of a wouldbe Bronco ute

However, given the seemingly endless appetite for utes in the USA and other markets – specifically Australia – Ford could justify the Bronco Ute. It would be a more direct rival to Jeep Gladiator (in the same way the Bronco matches up against the Wrangler) and appeal to a more lifestyle-orientated buyer.

The Bronco Ute would likely make use of the same engine line-up as the Bronco range – a 200kW 2.3-litre turbocharged four-cylinder or 2.7-litre V6 turbo petrol with 231kW. It will also get the same four-wheel drive system that includes Dana front and rear axles, locking differentials and a drive mode select system Ford calls ‘G.O.A.T’ – Go Over Any Terrain.

While the company has teased the new model, it’s unlikely to hit the market until 2024 in the US. There’s still no official plans for the blue oval to build the Bronco in right-hand drive, Australian ute fans may miss out. But the Bronco Ute isn’t the only possible addition to the blue oval’s pick-up range. Ford is reportedly close to revealing a reborn Maverick, a compact ute based on the same SUV underpinnings as the Bronco Sport and Escape.

It’s reportedly due to launch before the end of 2021 and will slot beneath the Ranger (at least in the Ford USA range) as a dual-cab pick-up for buyers looking for weekend adventure more than a workhorse.

While it will get a unique body and nameplate, the Maverick is expected to share its engines with the Bronco Sport. The most likely is the range-topping 2.0-litre four-pot turbo with all-wheel drive; as a front-wheel drive ute may be a tough sell.