The company is reviving its former compact off-roader and has heralded its arrival with this awesome Bronco R race prototype. It not only previews the arrival of the all-new Bronco in 2020 but celebrates the 50th anniversary of Rod Hall’s victory in the Baja 1000 in the original Bronco.

The Bronco R has been designed by Ford Performance with assistance from off-road specialist Geiser Bros Design and former Baja 1000 champion Cameron Steele. It is meant to serve as a preview of the production Bronco look, albeit with some racing upgrades; such as the huge off-road wheels and rollcage.

It’s not just for show though, Ford Performance is entering the car in the 2019 Baja 1000 with Hall’s grand-daughter, Shelby, driving. The race prototype is built on the same underpinnings as the production Bronco so the event will be part of the development process for the road car.

“Bronco’s win at Baja in 1969 was epic, something that even after 50 years has not been repeated,” said Hau Thai-Tang, Ford chief product development officer. “Rugged endurance racing is such a big part of Bronco heritage. The Baja 1000 gives us not only the perfect setting to honour Rod Hall’s win, it also provides an authentic test bed to demonstrate our upcoming Bronco’s desert racing capability and durability.”

The Bronco R features a version of the production-spec chassis and suspension set-up, but with race-grade Fox shocks capable of 18-inches of travel, 17-inch beadlock-capable alloy wheels and massive 37-inch BFGoodrich tyres. The engine is also based on the expected powertrain for the production Bronco, which is so far unconfirmed but Ford Performance’s off-road racing supervisor Brian Novak hinted it is likely to be the blue oval’s 3.5-litre twin-turbo V6 EcoBoost.

“Like the original Bronco, we kept Bronco R’s design authentic and simple, with a roll cage on a production-style frame, and a five-piece lightweight body on top,” Novak said. “For the endurance needs of Baja’s 1000 gruelling miles, we built in a limited number of race-focused parts. But even the twin turbos of the EcoBoost engine are representative of what the production Bronco will offer.”

It’s also considered likely the Bronco will be available with a version of Ford’s 2.3-litre four-cylinder turbo EcoBoost engine is the lower grade models.

Unfortunately, it seems unlikely the Bronco will be built in right-hand drive despite the fact it’s built on the same T6 platform as the Ranger and Everest that was developed by Ford Australia’s team in Melbourne.

Instead the Bronco and a left-hand drive version of the Ranger will be built in the US for domestic consumption. But if the production version of the Bronco looks anything like the race prototype we can cross our fingers and hope Ford changes its mind, because it would look right at home in the Australian outback. 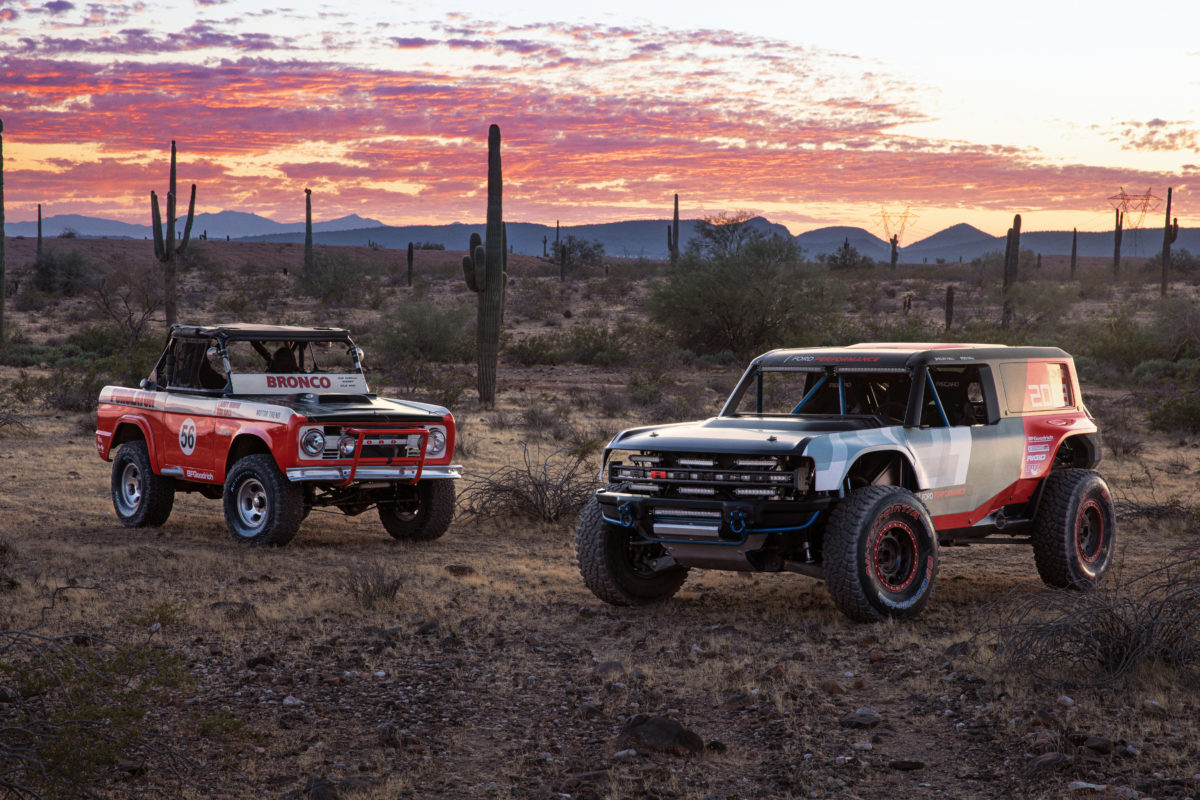