This Holden Torana SL/R 5000 has some key racing pedigree

Demand for classic Holdens remains high, but even by recent standards the latest piece up for auction is pretty special. This 1974 Holden Torana L34 SL/R 5000 is set to go under the hammer this weekend and it’s an ideal purchase for anyone with a love of Australian motorsport.

That’s because this machine has two special elements taken from the golden age of Holden’s involvement in motorsport. For starters, the paint is a special order Sebring Orange, one of only six in this particular hue, created especially for Bob Jane’s Southern Motors dealership at the time. The second racing connection is under the bonnet, where an iconic 308 cubic inch (5.0-litre) V8 built by longtime Holden racing mechanic Ian Tate resides. Tate was a key player in the Holden Dealer Team throughout the 1970s and ‘80s, working alongside Peter Brock and co.

But even putting aside those motorsport links, this is a highly desirable Australian muscle car. The 1974 model is the famous SL/R 5000 version, introduced as the homologation special for touring car racing in the wake of the infamous ‘Supercar Scare’; that ended Holden’s plans for a more potent V8 Torana and Ford’s Phase IV Falcon GT-HO. It’s believed only 263 examples of the L34 SL/R 5000 were built, but it did the job – winning the Bathurst 1000 in ‘75 with Brock and Brian Sampson and again in ‘76 with Bob Morris and John Fitzpatrick. 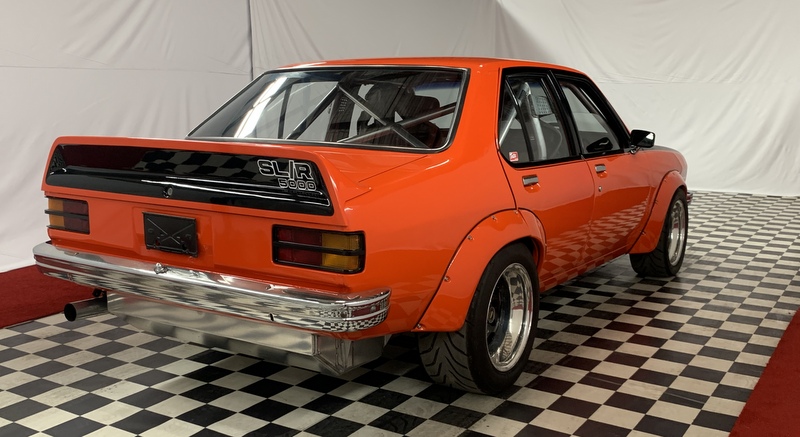 This Holden Torana SL/R 5000 will be sold this weekend

While this example up for auction wasn;t a period race race, it has been converted to race specification (hence the Tate V8) and features a stripped-out, but well presented, interior – making it an ideal track car for whoever wins the bidding.

Or, if the buyer prefers, it can be switched back to original specification as it’s being sold with the original engine and seats.

At time of publication bidding had already reached $205,000, which is in keeping with the current trend of big bucks for classic Aussie muscle cars and especially Holdens. One of only four HSV Maloo GTS-R W1 sold for more than $1 million.