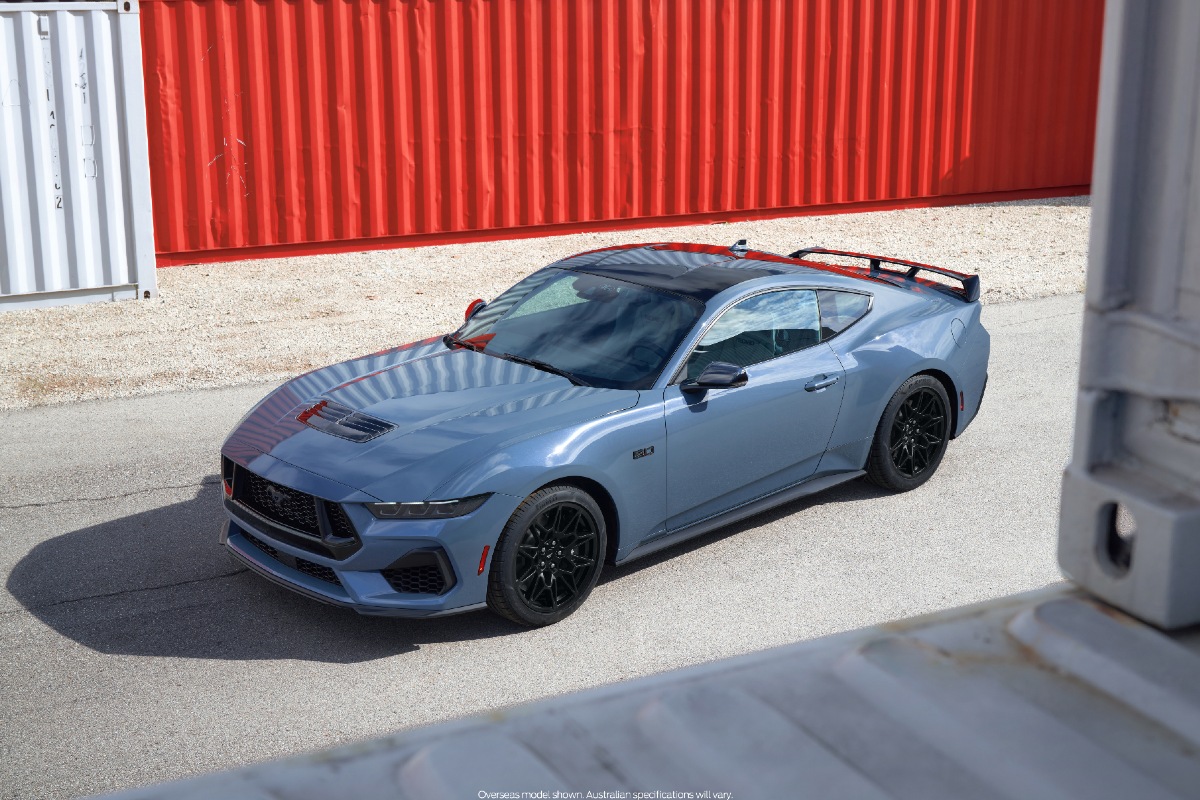 Ford has taken the wraps off an “edgy, sexy and disruptive” new Ford Mustang at the North American International Auto Show in Detroit.

Torquecafe was on hand to see the new car up close and in the metal as Ford revealed the car in front of media, owners and fans in downtown Detroit. In a bid to inject a more youthful appeal into the seventh-generation Mustang, Ford has toned down the retro design and instead focused on adding more technology and driving characteristics that will appeal to millennials.

Key among these youth-orientated changes are a radically redesigned cabin and the introduction of an ‘Electronic Drift Brake’ – developed in partnership with drifting champion, Vaughn Gittin Jr. 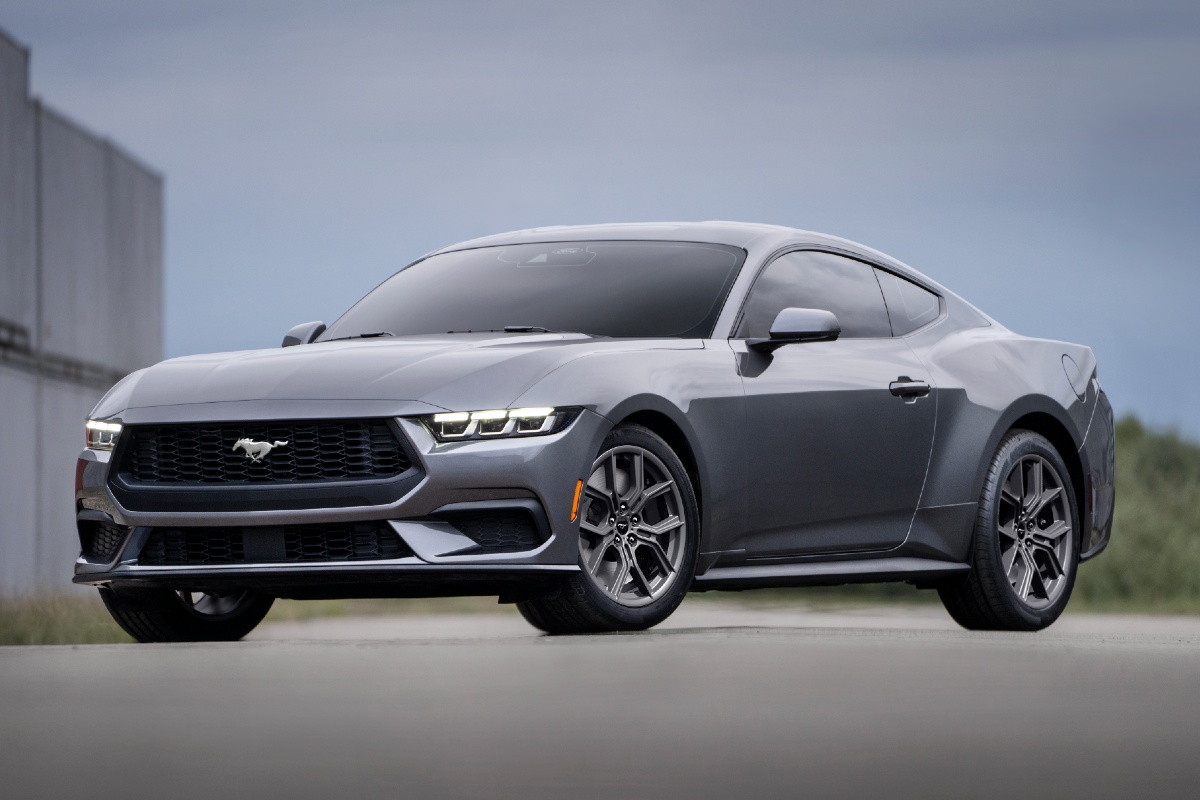 The interior of the new Mustang is dominated by a pair of large screens that have been inspired by smartphones, as well as other modern cars that are embracing digital over analogue controls.

High-grade cars will feature what Ford calls a ‘continuous’ display, which incorporates a 12.3-inch digital instrument panel and a 13.3-inch infotainment touchscreen into a single element that is tilted towards the driver.

Ford says this was a key request from younger buyers who prefer technology over the retro-inspired look from the sixth-generation model. However, it means the famous ‘double brow’ dashboard design that was a Mustang hallmark has been dropped to accommodate the big screens.

READ MORE: Why you can’t order a Ford Mustang

The company has also made a significant effort to improve the look and feel of the interior materials, with several new and better quality trim elements introduced for this new generation model. 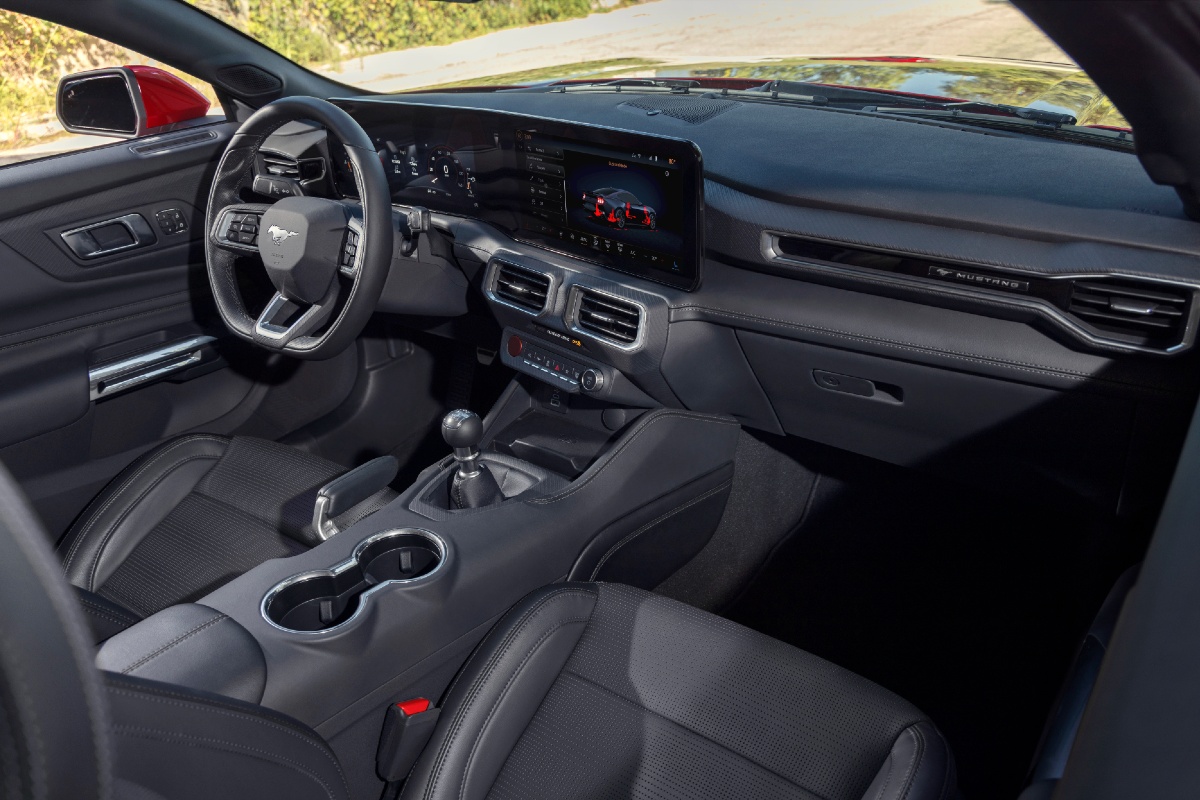 There’s also a new steering wheel, with a flat-bottom rim, that will be standard across the range.

Outside the design is more evolutionary, albeit with a more angular and aggressive theme in keeping with the ‘edgy’ aspirations. The silhouette remains similar to the Fastback-inspired sixth-generation but all lines are crisper and give the car a more muscular look.

Notably the V8-powered GT and four-cylinder EcoBoost models feature significantly different exterior design at the front end. The GT gets a larger, more aggressive grille design with ‘nostrils’ on either side of the upper grille to direct more air into the engine bay. There’s also GT-specific bonnet vents that further differentiate the look of the two cars but are also functional in extracting air from the engine bay.

Underneath the bonnet Ford will continue with the same engine line-up as present – the 5.0-litre V8 and 2.3-litre four-cylinder turbo petrol – with no official discussion about any plans for electrification at the launch event.

The V8 is an evolution of the Coyote in the out-going model, with newly-developed individual throttle bodies and separate air-boxes for each bank to increase performance. Ford hasn’t revealed official figures but claims it’s more powerful than the 345kW V8 in the special edition Mustang Mach 1. The V8 will be paired with the choice of either a six-speed manual or a 10-speed automatic transmission.

The EcoBoost engine is an all-new design, which is part of a new modular family of four-cylinder engines for the brand. Once again there is no performance data, but Ford has confirmed it will only be available with the 10-speed automatic gearbox.

But the key new technical feature Ford did want to talk about is the so-called Electronic Drift Brake. Standard in all models with the Performance Package, this electronic handbrake replaces the previous mechanical system and allows the driver to pull it more easily on the move so you can slide the back end of the car.

Ford drafted in ts long-time drifting ace, Gittin Jr, to help test and develop the system which Ford hopes will be another major selling-point for younger buyers.

Ford Australia has said the new Mustang is due locally by late 2023, with further details about specification and pricing to be revealed at a later date.