Porsche is blurring the lines between road and race car with its upcoming 911 GT3.

The German brand has given its first official look at the new GT3 road car and revealed that elements of the engine, suspension and aerodynamics have all been lifted from the racetrack. And all in the name of creating the most engaging sports car the company offers.

Set to launch officially in 2021, Porsche released these images of a prototype 992 generation GT3 testing in Europe (where selected media were given a passenger ride), and announced what lies beneath the track-inspired bodywork.

As expected the new 911 GT3 carries over the 4.0-litre flat-six from the previous model. More specifically it gets the reworked and upgraded version that was installed in the 991 generation 911 swansong model, the 911 Speedster. That means the new GT3 will make 375kW of power and 469Nm of torque, only a minor increase from the out-going model’s 368kW/460Nm, but it comes in the face of ever tighter emissions standards that aren’t kind to naturally-aspirated engines.

Especially high-performance, high-revving ones like the 4.0-litre in the GT3, which will spin up to 9000rpm.

The engine will be paired to either a six-speed manual transmission or seven-speed dual-clutch automatic. Porsche originally launched the 991 GT3 with only the dual-clutch, claiming it was faster, but quickly introduced the manual for purists, so they can rest easy that it has been retained.

With only a small power bump most of the focus for the 992 GT3 was improving the handling to ensure it was faster than the model it replaces. The racing inspiration for the 2021 Porsche 911 GT3 is obvious

To that end Porsche’s GT department took lessons from racing to shape the aerodynamic package. The most obvious carryover is the swan-neck rear wing, which allows for cleaner airflow across the wing’s main element.

There’s also reportedly a flat-bottom underneath the car and a large diffuser to further aid handling. Porsche is claiming a 50 per cent increase in downforce without increasing drag.

To further improve the handling the GT division raided the parts department at Porsche Motorsport, taking elements of the 911 GT3 Cup and 911 RSR for the front suspension. 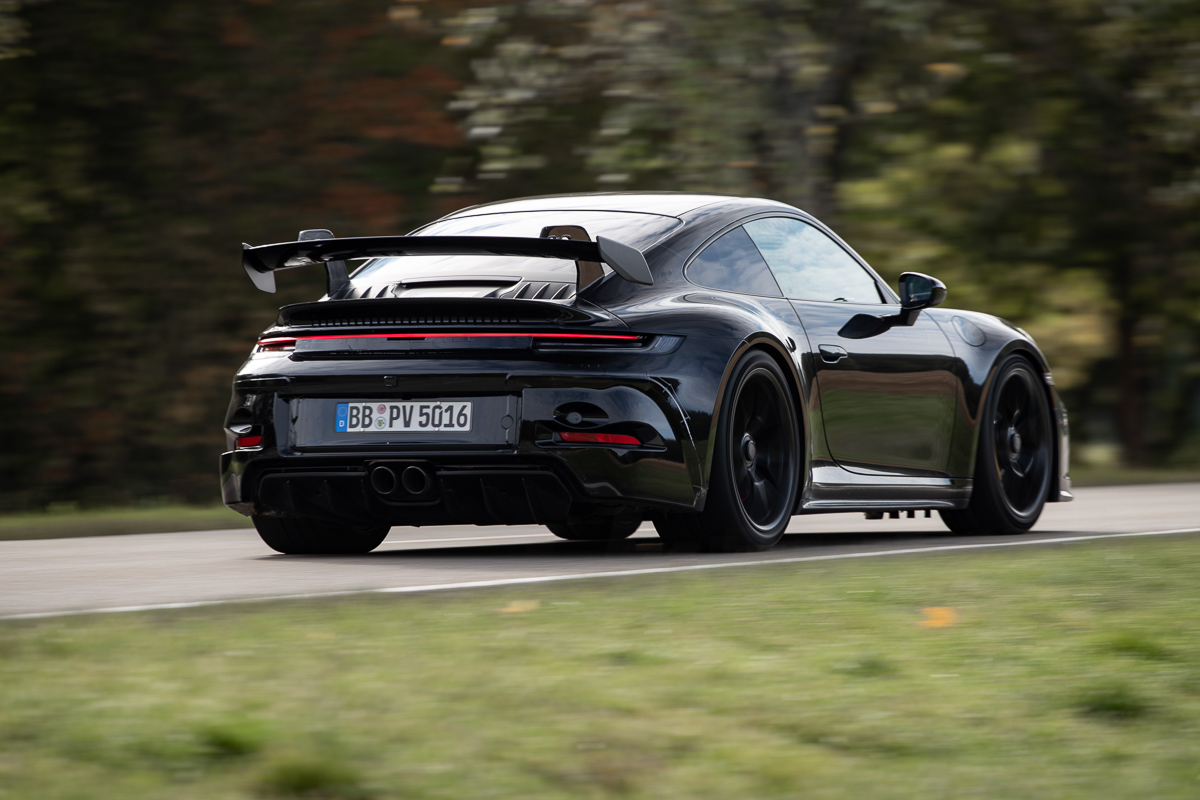 There’s also stiffer springs for a more controlled ride, but careful damper tuning has been done to ensure there’s ride comfort on the road.

Braking is managed by huge vented discs (another racing lesson) that measure 408mm up front. The brakes sit behind 20-inch alloy wheels that are 9.5-inches wide at front and 12-inches at the back. The tyres are grippy Michelin Pilot Sport Cup 2.

Another impressive achievement for this new GT3 is it weighs the same as the old model, despite a bigger body for the 992 generation. That’s thanks, in part, to the a carbon fibre bonnet, thinner glass, no rear seats and less sound deadening material.