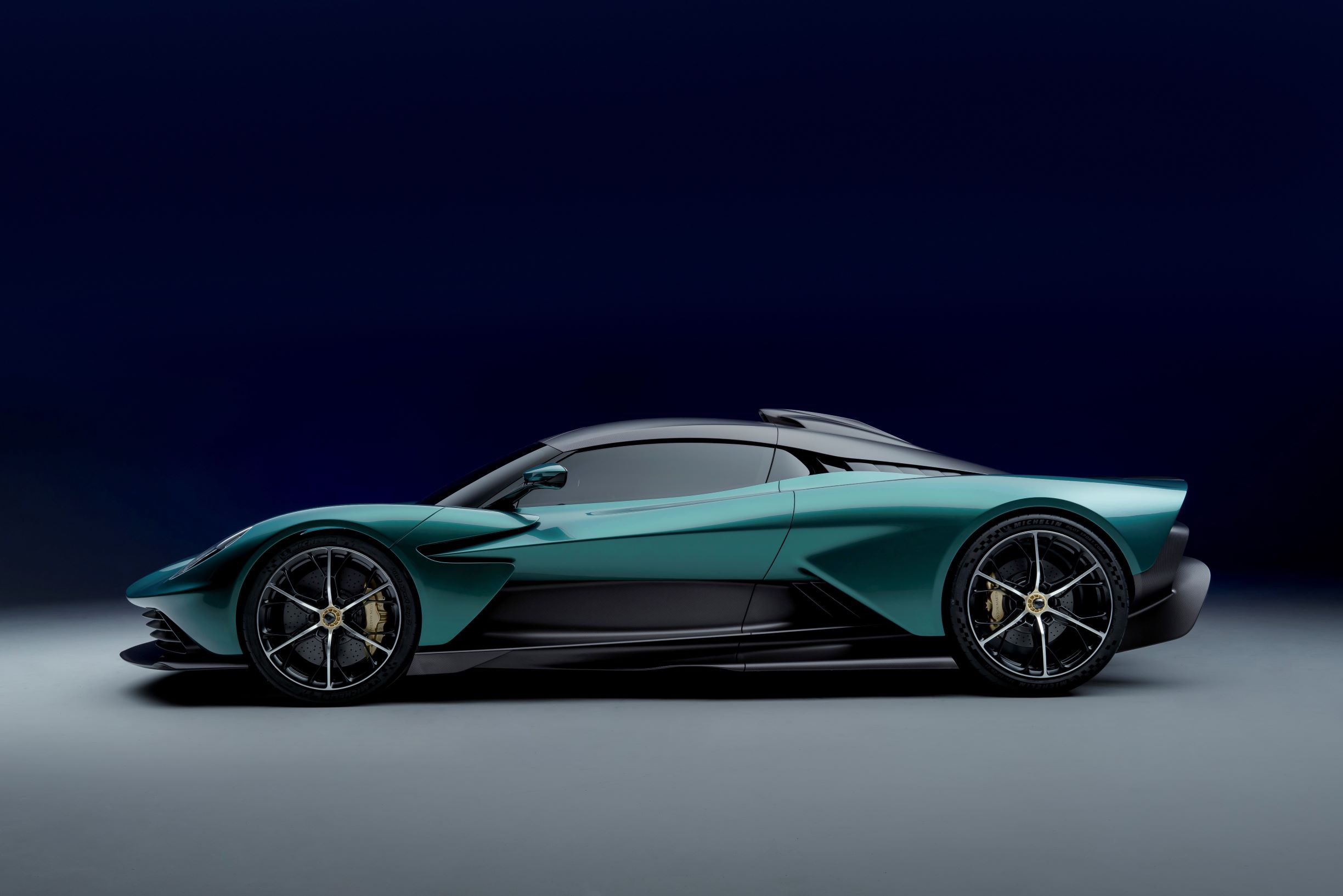 There’ll be a third Aston Martin-AMG on show at this weekend’s British Grand Prix, but it won’t be in the race.

In addition to the AMR21 of Sebastian Vettel and Lance Stroll the British sports car brand has also taken the wraps off its latest road car, and it’s long-awaited Ferrari rival, the Valhalla supercar. This is the first series production mid-engined model from Aston Martin, following in the path blazed by the Valkyrie hypercar the brand developed with former F1 partner, Red Bull Technologies.

The Valhalla has been expected for several years, as Aston Martin has long aspired to expand beyond its range of front-engine GT cars and into the true supercar space with mid-mounted motors to take on Ferrari, Lamborghini and Porsche.

Aston Martin executive chairman, Lawrence Stroll, was unsurprisingly excited at the first all-new model to launch under his leadership. “The launch of Valhalla demonstrates Aston Martin’s commitment to building a range of exceptional mid-engined driver focused cars, a crucial next stage in the expansion of our product line-up,” Stroll said. “It also seemed fitting to unveil this stunning track biased supercar at the home of motorsport and the home of the Aston Martin Cognizant Formula One Team and marks Aston Martin’s return to the British Grand Prix for the first time in over 60 years, a true milestone.”

The Valhalla was teased as the AM-RB-003 concept in 2019 but the finished product is very different in many respects. That’s in large part thanks to the leadership change at Aston Martin since Stroll took over, replacing former CEO Andy Palmer with ex-AMG boss Tobias Moers.

When Aston Martin unveiled the AM-RB-003 the company called it “son of Valkyrie” and said it would be a limited edition model with only 500 available.

Moers scrapped that idea and the Valhalla will become a full-time member for the brand’s line-up for the foreseeable future, effectively sitting above the Vantage and DB11, giving it a rival to the likes of the Ferrari 296 GTB, Porsche 911 Turbo and Lamborghini Huracan. 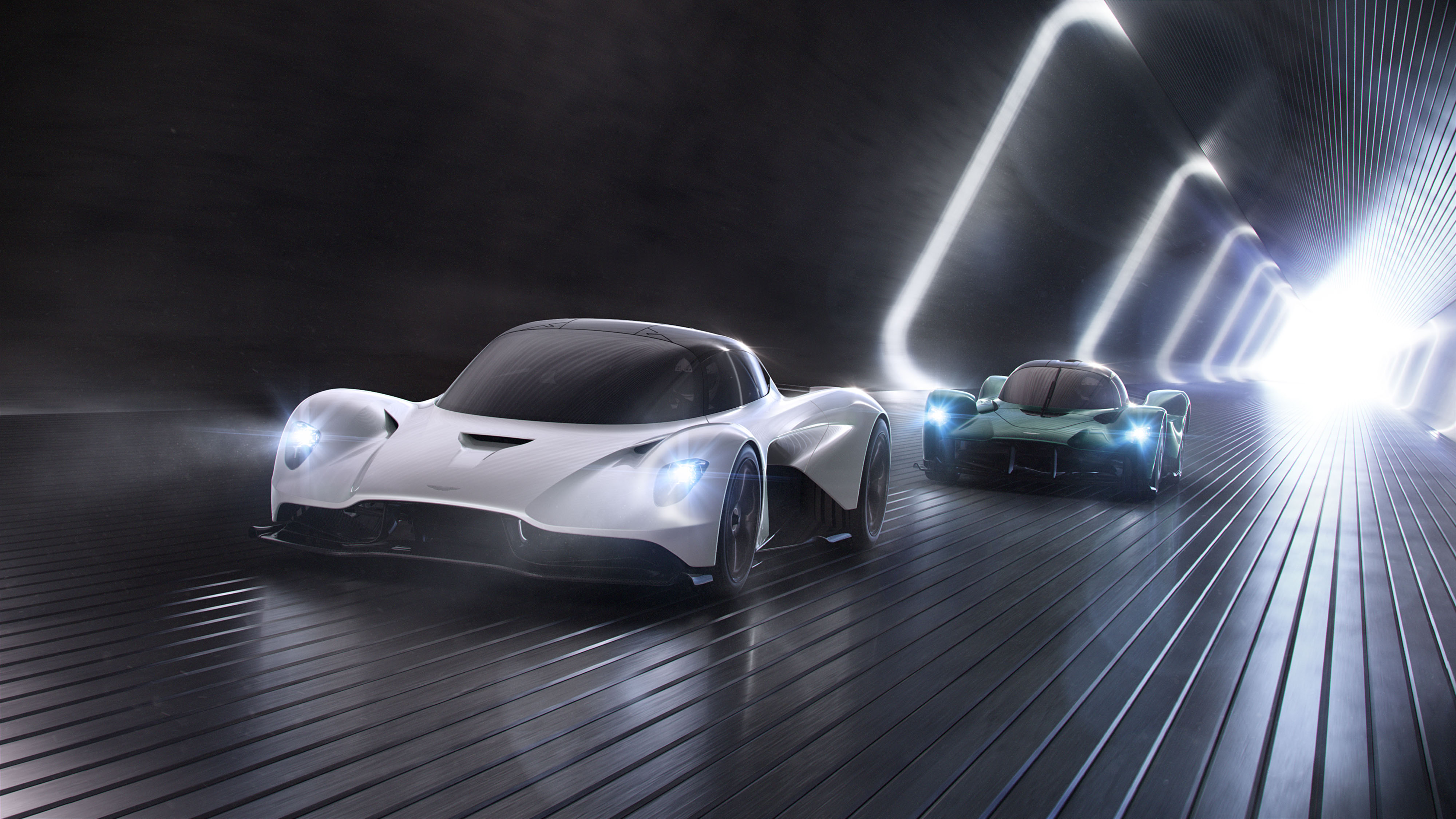 One of the biggest technical changes is what’s under the bonnet. The original plan called for a 3.0-litre twin-turbo V6 that would feature a hybrid boost and be designed and built in-house by Aston Martin.

Although the engine was designed and development was close to production, Moers made the call to scrap it and switch the Valhalla’s motivation to a 4.0-litre twin-turbo V8 from AMG. This is the engine Aston already uses in the Vantage and DB11, so it’s simply an extension of the partnership between Moers old and new employers. 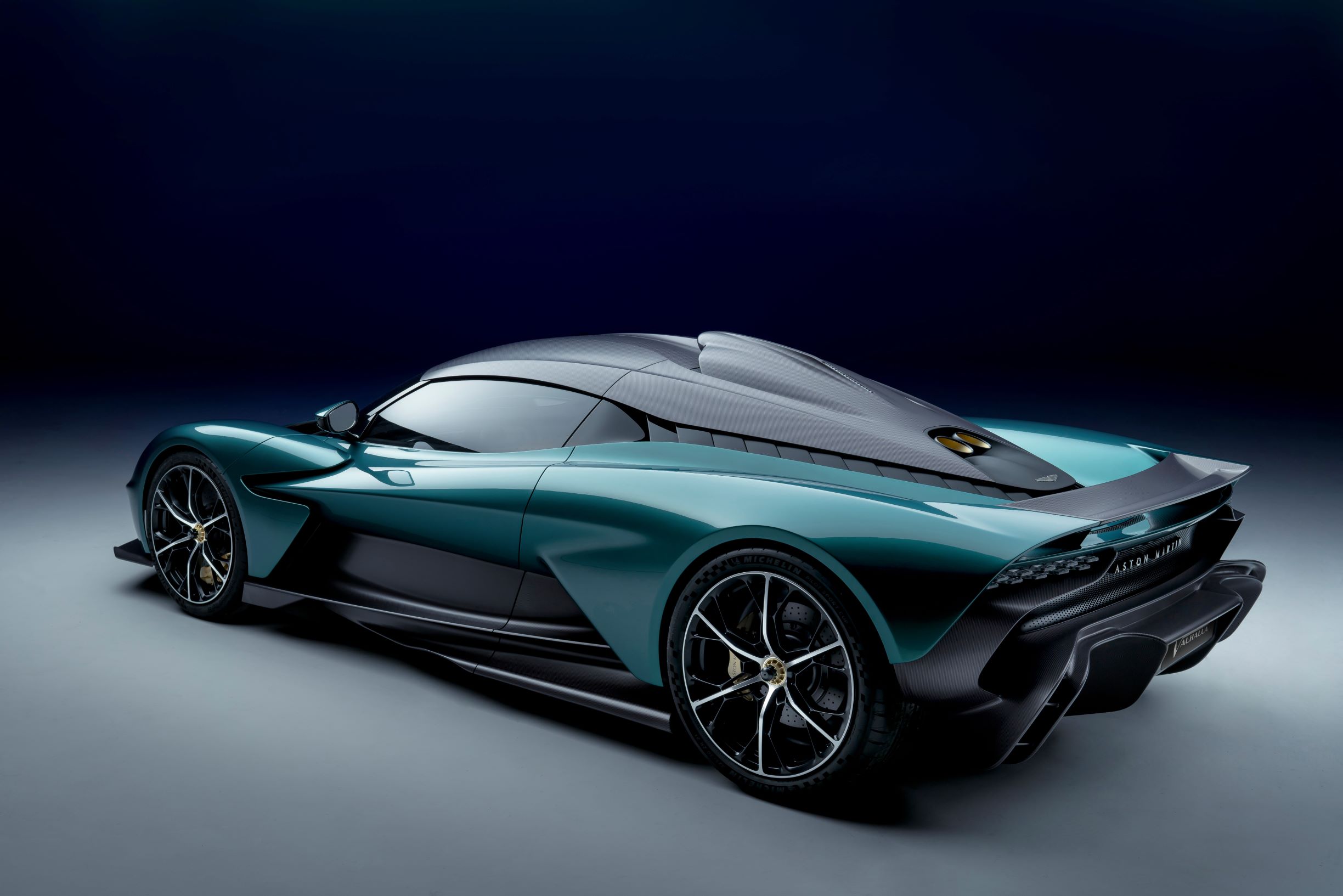 The V8 makes 551kW of power on its own but is assisted by a pair of electric motors, one on each axle, that boosts the total powertrain output to 698kW and 1000Nm of torque. The engine is paired to an all-new eight-speed dual-clutch transmission that has been designed specifically for Aston Martin. Claimed performance for the new model is 2.5 seconds for 0-100km/h and a top speed of 330km/h. The brand is also targeting a 6:30 lap time at the Nurburgring Nordschleife, which would undercut the current production car lap record by more than 13 seconds.

Not only is it powerful, but the company claims the Valhalla can run on electric power alone for up to 15km at speeds up to 130km/h.

Despite dropping its own V6, Ralph Illenberger, head of powertrain engineering for Aston Martin, is proud of this new era for the brand.

“Valhalla is our first opportunity to really show what we are capable of in a true production sense,” Illenberger said. “We have created our own bespoke air-to-air charge-cooled, flat-plane crank V8 engine and have combined it with a powerful hybrid system. And, of course, we also have our own bespoke dual clutch transmission – a first for Aston Martin and an essential component both for Valhalla and future Aston Martin models. The result is a truly world-class powertrain for an efficient, ultra-performing supercar.” 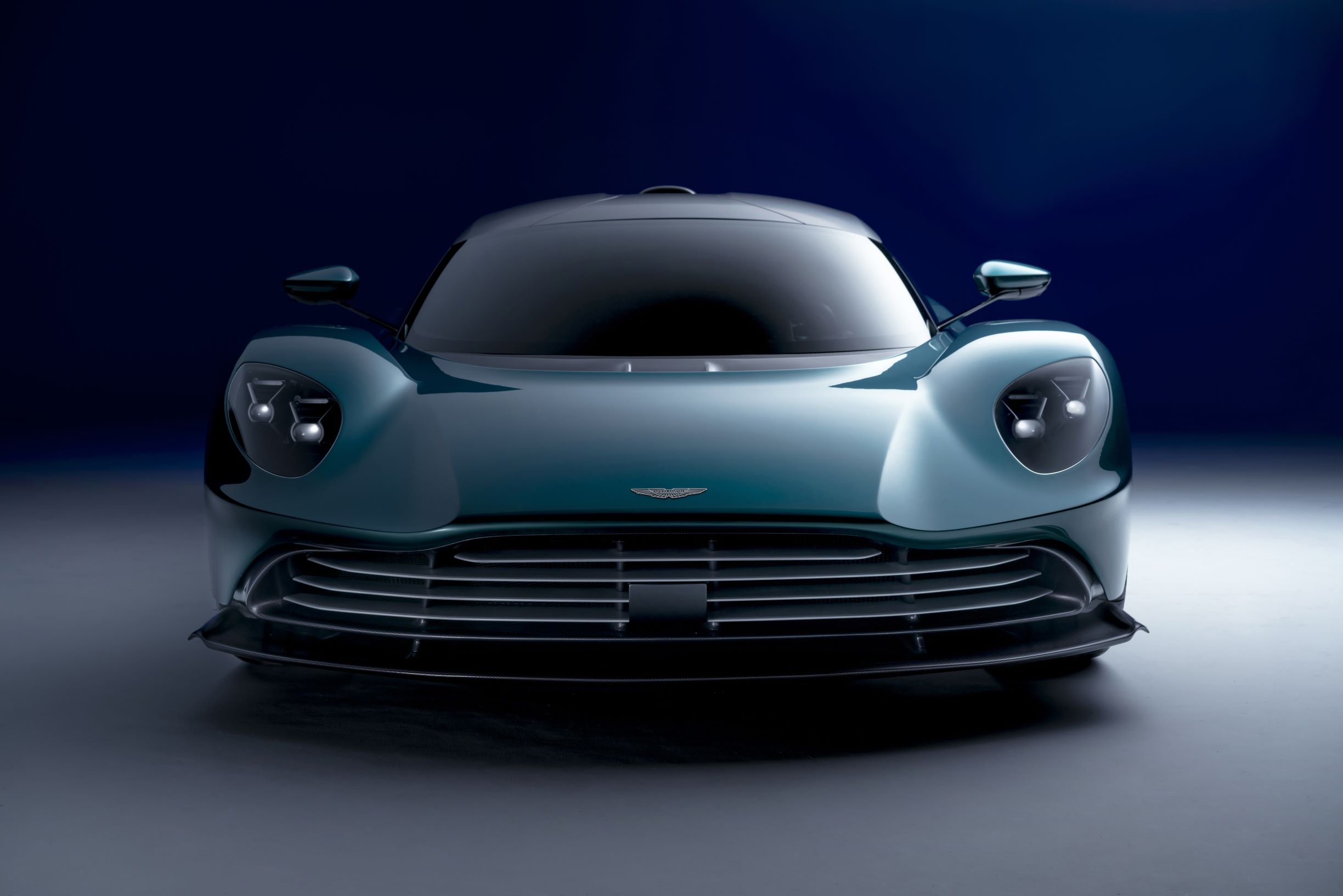 Perhaps the most obvious change for between the AM-RB-003 and the final Valhalla are the looks. Aston Martin’s design team, led by chief creative officer Marek Reichman, overhauled the appearance and aerodynamics of the concept to arrive at the finished shape.

The carbon fibre bodywork still wraps over an F1-style carbon fibre monocoque, however, it now features a dramatically different front end treatment as well as re-shaped sides and rear as Aston Martin looked for the best shape. The designers and engineers deliberately opted against “aggressive wings” by generating significant downforce underneath the car.

As Reichman explained: “When we created the Valhalla concept we were keen to emphasise the design legacy of the Aston Martin Valkyrie and that intent remains unchanged, but the execution has evolved considerably in order to reach production of this all-new car. Though the legacy of Valkyrie is clear, Valhalla is now a more mature, fully resolved piece of design. One which combines the pure aerodynamic function you would expect from a marque competing in Formula One together with the beautiful form, striking proportions and exemplary detailing for which Aston Martin is renowned.” 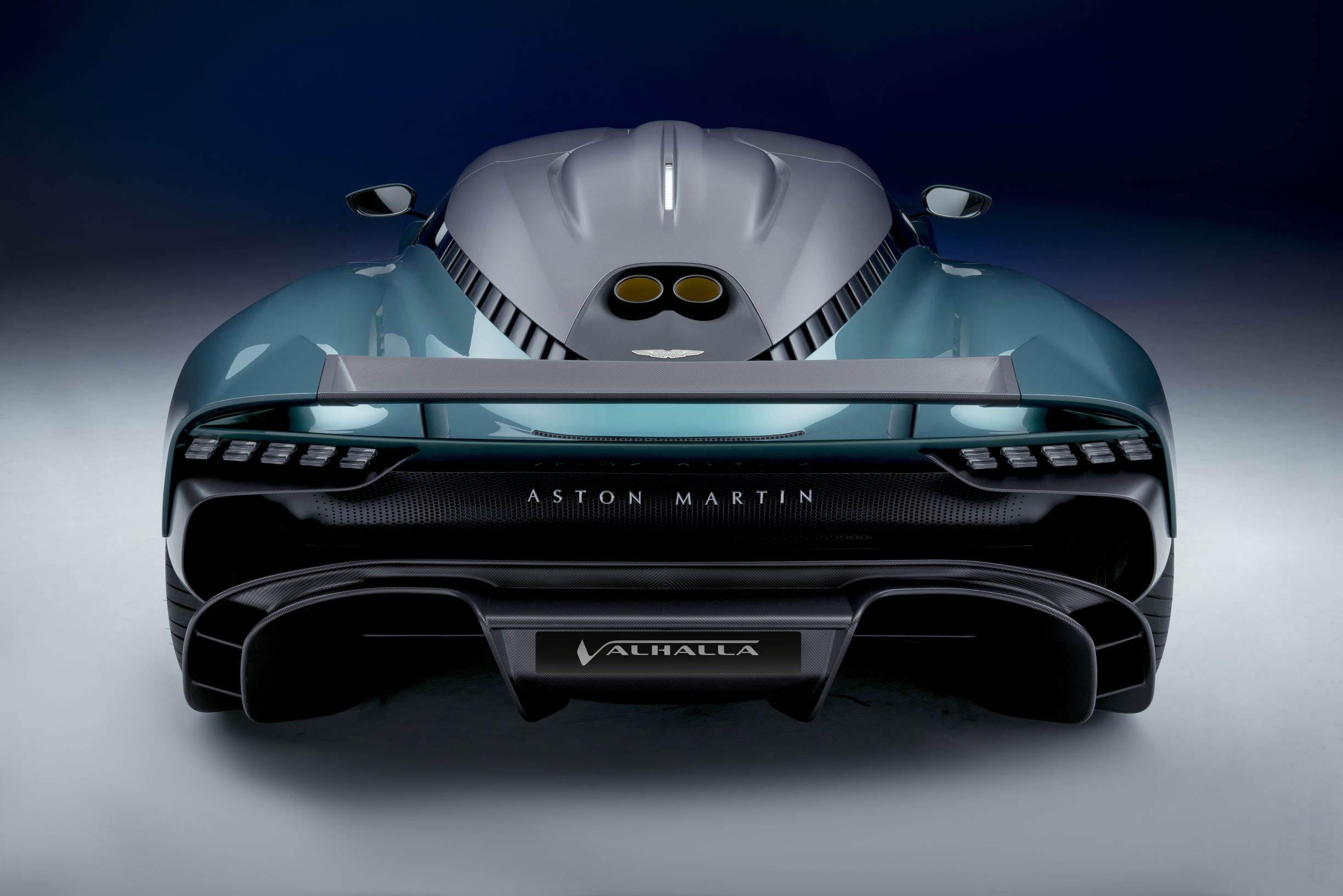 Aston Martin hasn’t released images of the interior yet, but has confirmed the Valhalla will be built in right-hand drive; although no official timing for its Australian arrival has been announced.

While a major departure in many respects – both visually and mechanically – from the original concept, Moers is confident that the Valhalla is the right car to lead Aston Martin into its new future.

“Preserving the essence of an exceptional concept car is vital when meeting the challenge of bringing it into production,” Moers said. “With Valhalla not only have we stayed true to our commitment to build a world-beating supercar, but we have exceeded our original aims. The result is a pure driving machine – one which exists right at the cutting edge of performance and technology yet allows the driver to feel the emotion and thrill of complete connection and control.”

To help kick-start sales of the Valhalla and create some buzz around the all-new model, Aston Martin will turn to its most famous salesman – James Bond. A pre-production version of the car, that looks more similar to the AM-RB-003, will appear in the next Bond movie, No Time To Die, that’s due in cinemas later this year.