Former V8 Supercar regular Maro Engel has guided the Mercedes-AMG One hypercar to a new production car lap record at the Nurburgring.

The AMG One uses a powertrain based on the same turbocharged V6 hybrid unit found in the Formula 1 winning Mercedes-AMG cars driven by Lewis Hamilton. In the hands of Engel, in less than ideal conditions with a damp track and cool temperatures, the AMG One lapped the 20km German circuit in 6:35.183 minutes.

For comparison, Porsche previously claimed the record with a 6:43.300 minute lap with its 911 GT2 RS with Manthey Performance Kit in June 2021.

For Engel, who spent the 2013 Supercars season with Erebus Motorsport driving the Mercedes-AMG E63, the lap was a challenge given the conditions but not a surprise given the F1 pedigree of the car.

“That was really an unforgettable experience,” Engel said. “I didn’t expect that we would be able to set such a lap time with these track conditions. In some crucial areas of the track, it hadn’t dried completely yet and was therefore tricky. That was a special challenge. We tried to find the optimal deployment strategy during the pre-tests. Like Lewis Hamilton and George Russell on their race weekends, I also had to deploy the electrical energy of the hybrid drive in the best possible way. That’s not easy, especially with this length of track. In addition, the DRS function had to be used optimally. But that’s also a real Formula 1 feeling. I would like to thank you for this opportunity and the trust you’ve placed in me. It was definitely something very special to drive this incredible car on the Ring.” 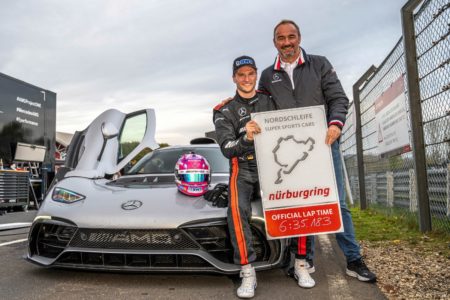