Bronco’s back! All you need to know about Ford’s revived icon

Bronco’s back! All you need to know about Ford’s revived icon 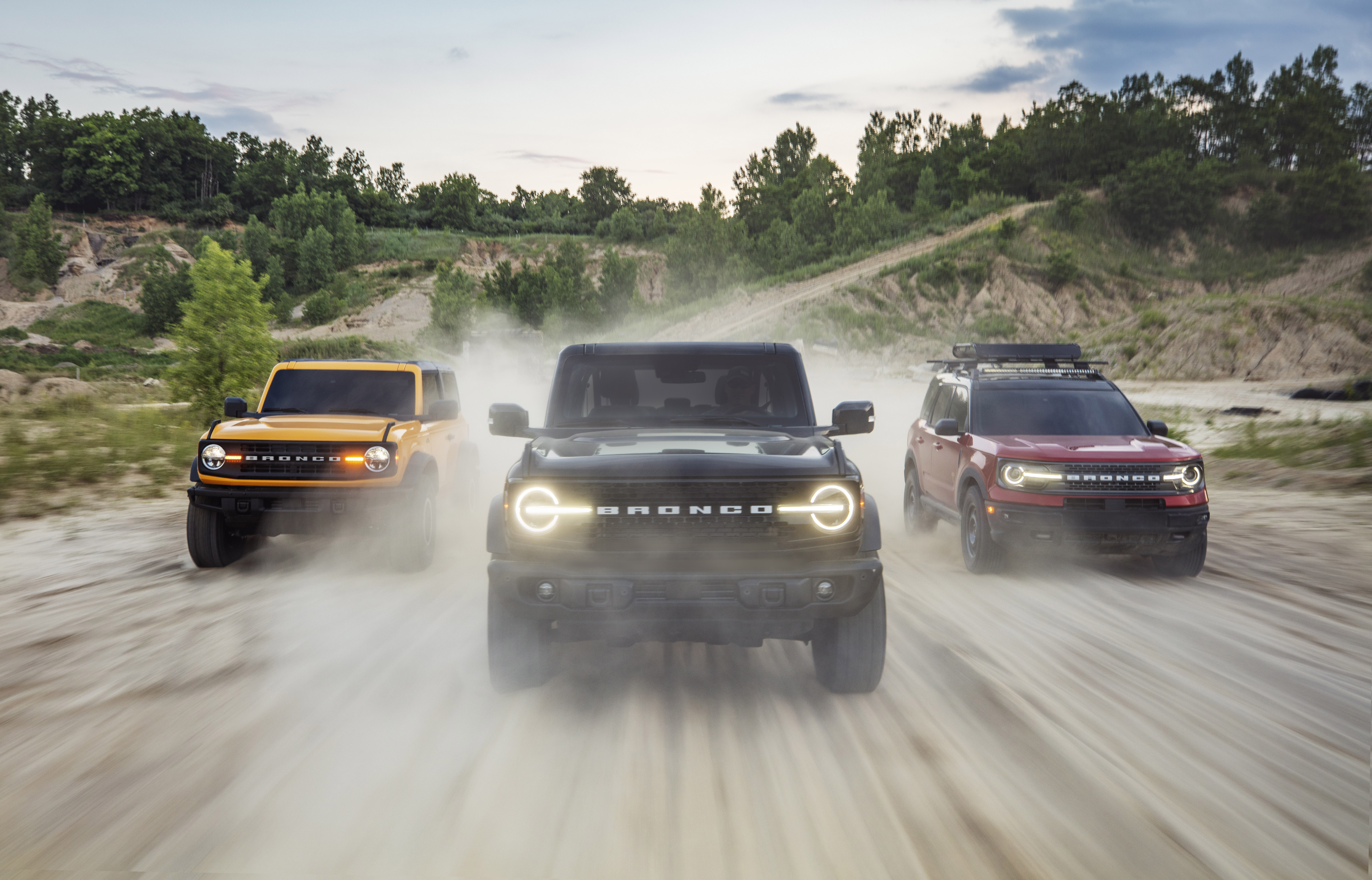 Ford has resurrected the iconic Bronco off-roader – bigger and better than ever before.

After a 24 year hiatus, the blue oval has brought back the Bronco – it’s two-door 4×4 designed to compete against the likes of the Jeep Wrangler and Land Rover Defender – but not just as a single model.

Ford hasn’t just brought back the Bronco nameplate – it’s turned it into a new family to cash-in on the current demand for SUVs that can get off the beaten track. Yes, the two-door is back, but for the first-time the brand will also offer a four-door Bronco and a Bronco Sport; a smaller, more family-friendly SUV.

The American brand has high hopes for the new Bronco family. Not to put too fine a point on it, but Ford CEO Jim Farley said the new Bronco manages to capture elements of the brand’s two other icons – the Mustang and F-Series. So there’s plenty of pressure and expectation on this re-born Bronco range.

“We created the Bronco family to elevate every aspect of off-road adventure and equipped them with class-leading chassis hardware and exclusive technologies to raise the bar in the rugged 4×4 segment and take people further into the wild,” Farley claimed. “They’re built with the toughness of an F-Series truck and performance spirit of Mustang – and come wrapped in one of the most stunning and functional off-road designs that’s true to the original Bronco design DNA.” 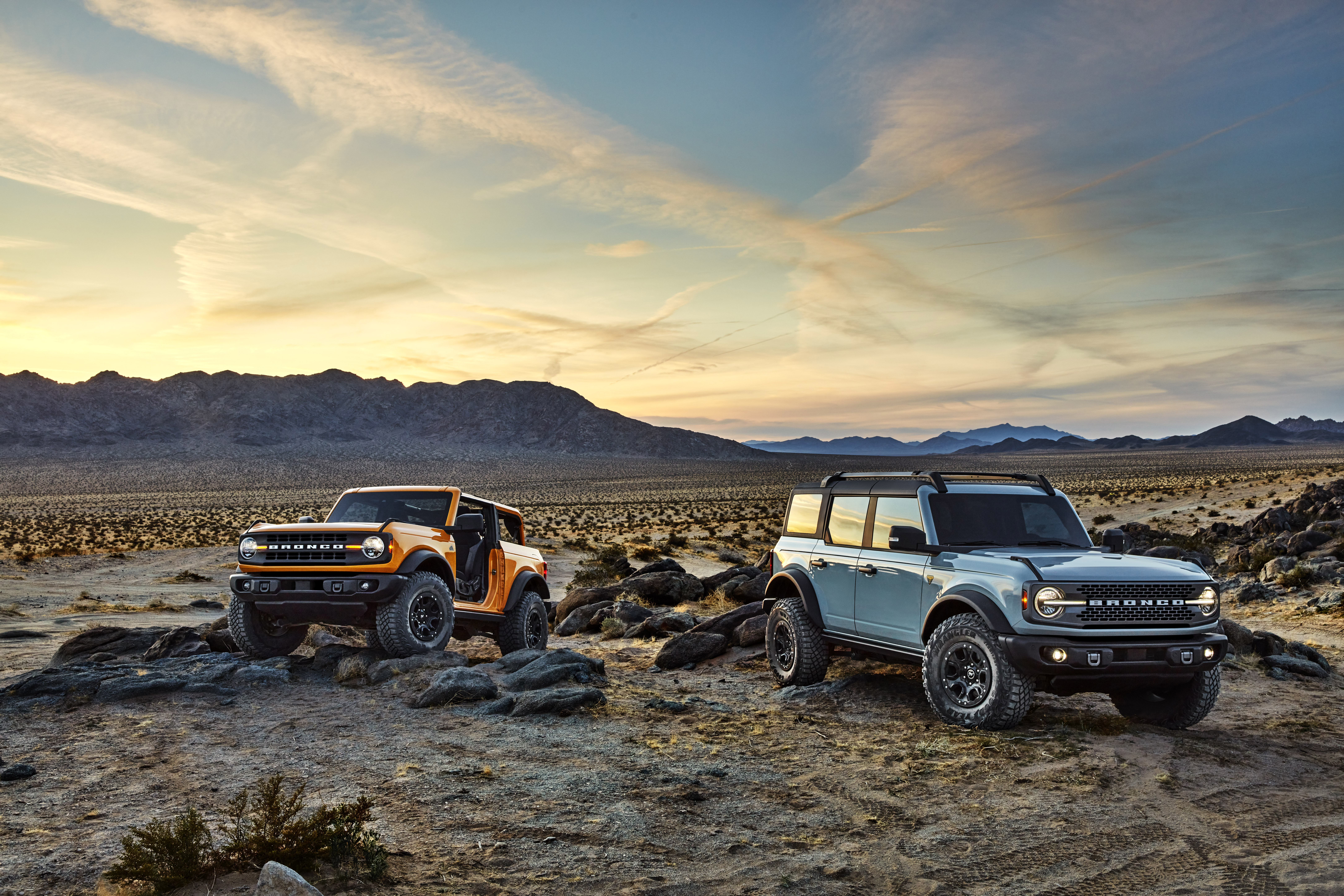 Ford is offering both a two- and four-door model

The Bronco was designed and will be built in the USA, but at its core is a piece of Australia. That’s because Ford used the T6 Ranger platform – designed and engineered in Melbourne by the Ford Australia team – as the starting point for the new Bronco.

That means the Bronco is a proper body-on-frame off-roader, with Ford claiming it will have best-in-class suspension travel to ensure it can climb over most things its driver will tackle.

Two-door SUVs are not popular these days, with the Wrangler the most notable exception, but Ford couldn’t bring back the Bronco without staying true to the original. But neither could it ignore the expected demand for a more practical four-door model – so it built both.

Using the same chassis as the basis, it has built the four-door with a 398mm longer wheelbase (2550 v 2948) to allow for a bigger cabin. But both have very similar abilities to take owners well off the beaten path. 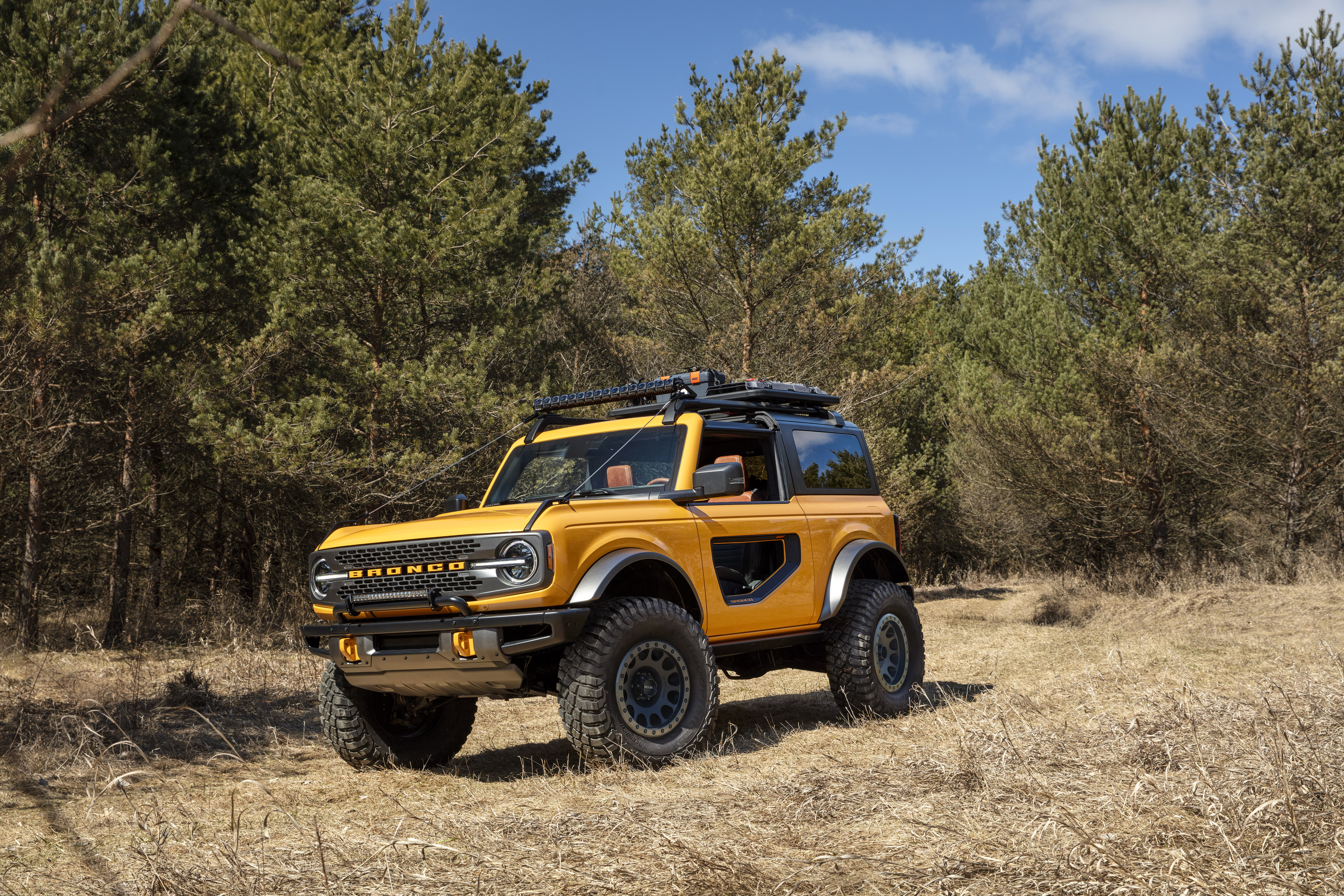 Ford has taken the off-road ability of the Bronco to the extreme to the point it’s offering two different 4×4 systems. The standard set-up features a two-speed electronic shift-on-the-fly transfer case, while the Advanced system gets a two-speed electromechanical transfer case. The latter also features an auto mode that allows you to switch between 2H and 4H.
Both systems use Dana axles front and rear with Spicer Performa-Trak electronic locking differentials for better traction when the going gets slippery (if those brand names aren’t familiar to you then you probably don’t go off-roading far enough to need a Bronco).

Both the two- and four-door models will be available with massive 35-inch off-road tyres from the factory which will help give them significant off-road capability. Ford calls its terrain management system G.O.A.T. – which stands for Go Over Any Terrain – which features seven driver-selectable modes; Normal, Eco, Sport, Slippery and Sand, Baja, Mud/Ruts and Rock Crawl. The new Bronco comes with a removable roof

When fitted with the bigger rubber the Bronco duo offers up 294mm of ground clearance and can make it through water up 850mm deep. The short overhangs mean it also boasts a 43.2-degree approach angle, 29-degree rampover, and 37.2-degree departure angle for better maneuverability.

Motivation for the Bronco comes from a 2.3-litre four-cylinder turbo petrol engine (or EcoBoost in Ford-speak). It may sound small but the engine pumps out a meaty 200kW of power and 420Nm of torque. It’s paired to either a seven-speed manual gearbox or you can opt for an optional 10-speed automatic. However, if that’s still not enough there’s an optional 2.7-litre V6 EcoBoost, which is good for 231kW and 542Nm; but it’s only available with the 10-speed auto.

While this new Bronco retains the boxy styling that made the original so memorable, Ford has ensured it meets current demand for flexibility – offering a removable roof for both the two- and four-door models.

If you enjoy the occasional off-road jaunt but the Bronco sounds too extreme for you then the Bronco Sport may be just what you’ve been waiting for. It’s a small SUV that features the same rugged styling of the bigger Broncos but doesn’t have quite the off-road capabilities.

“Bronco Sport has the toughness and smarts to help turn off-road novices into 4×4 pros,” explained, Hau Thai-Tang, Ford chief product development and purchasing officer. “Bronco Sport embraces the needs of outdoor enthusiasts – every inch of it was designed and engineered with weekend adventurers in mind.” The all-new Bronco Sport is a rugged small SUV

All Bronco Sport comes with four-wheel drive as standard, but the higher trim lines get a more advanced system that includes a differential lock for superior off-road traction. They also get the G.O.A.T terrain management system that includes Normal, Sport, Slippery and Sand modes, with Mud/Ruts and Rock Crawl reserved for those with the better 4×4 system.

The Bronco Sport is powered by a 1.5-litre EcoBoost engine with 134kW and 257Nm as standard, with (again) the higher grade models available with a more powerful, 182kW/372Nm 2.0-litre engine. Both are paired with an eight-speed automatic transmission.

Will we get it down under?

Despite the T6 Ranger being the basis for the revived Bronco it doesn’t look like Ford Australia will be adding the range to local showrooms. That’s because Ford USA has only committed to building the trio in left-hand drive. 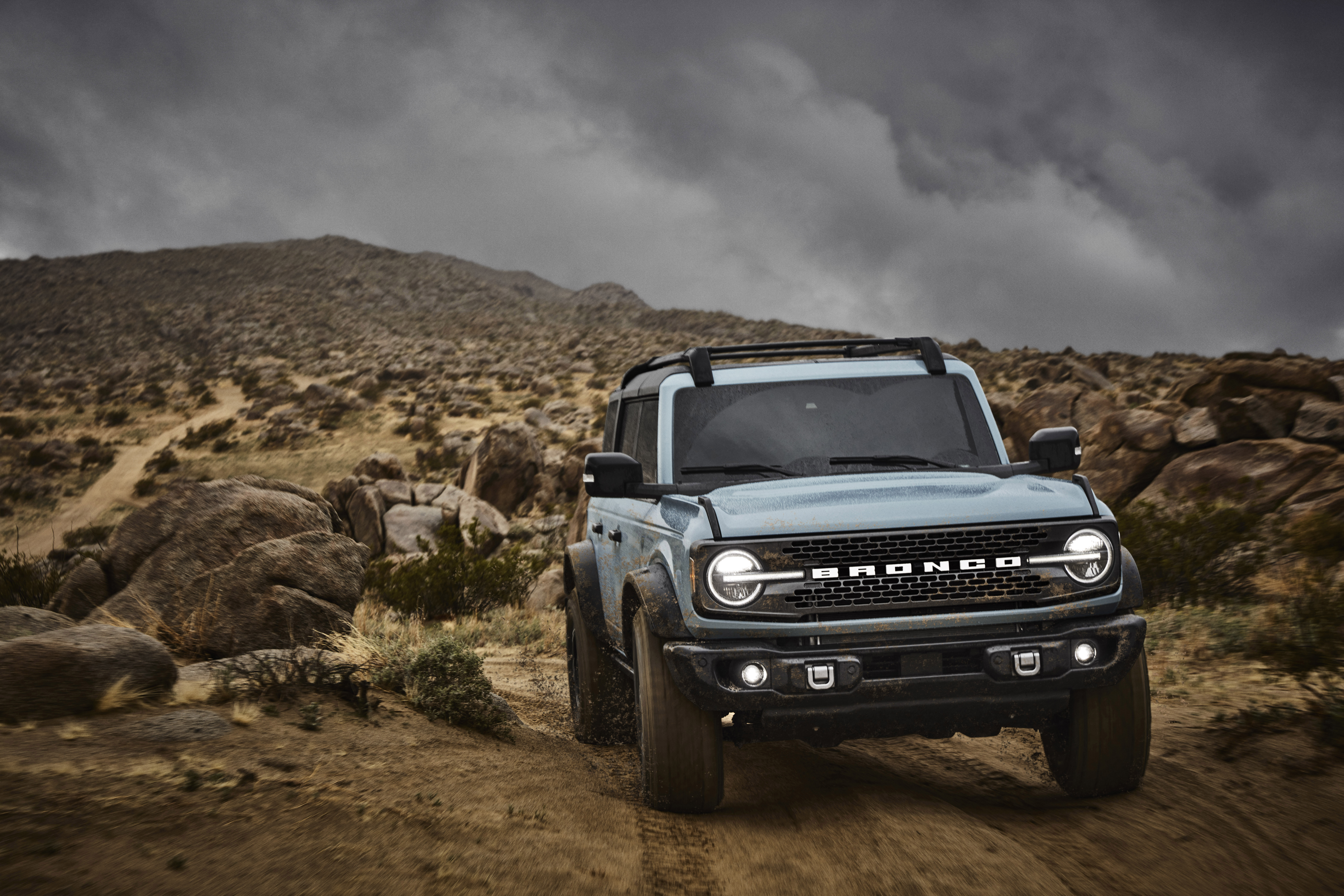 Unfortunately the new Ford Bronco won’t be coming to Australia

It’s a shame because the Bronco range would almost certainly find an enthusiastic audience in Australia. Not only is the Ranger Ford’s most popular model locally, suggesting Aussie blue oval buyers acknowledge the brand’s ‘Built Tough’ reputation, but the Jeep Wrangler and Land Rover Defender both have cult followings that the Bronco could tap into.

The Bronco Sport would also strengthen the brand’s SUV range, providing a more rugged alternative to the new Escape and over-looked Endura.