All the details on Mercedes-AMG’s ultimate track weapon

All the details on Mercedes-AMG’s ultimate track weapon They promised a lot – and the German giant has delivered a GT-spec race car for the road.

Only days after teasing it, Mercedes has revealed all about its new AMG GT Black Series and it boasts a radically re-worked engine and GT3-inspired aerodynamics.

The Black Series is a rarely used badge for AMG, reserved only for its fastest, most track-capable models – including the SLK55, CLK 63, SL65, C63 and SLS. But departing AMG boss, Tobias Moers (who will move to lead Aston Martin) believes the GT deserves it.

“The new GT Black Series is our latest automotive highlight and continues a tradition established in 2006,” Moers said. “The sixth version of its kind is another AMG milestone and impressive proof of the incredible development expertise in Affalterbach. I am proud of the team who have created a unique super sports car, which now represents the absolute peak of our successful GT family. The performance, looks and driving dynamics of the GT Black Series are second to none. This project was a fantastic end to my work at AMG, for which I am truly thankful.” 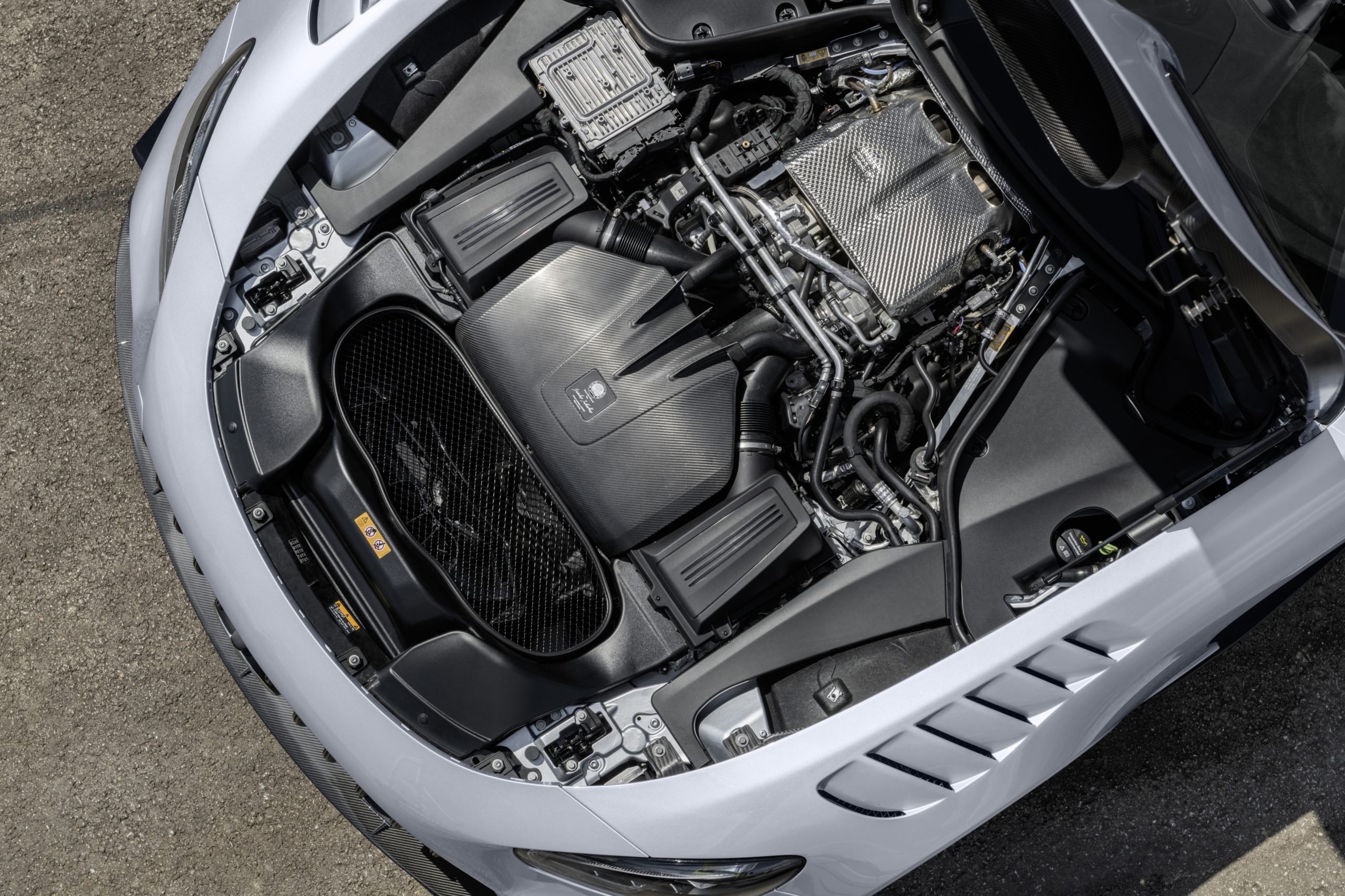 The Mercedes-AMG GT Black Series gets a unique V8 engine

As expected the 4.0-litre twin-turbo V8 engine has been heavily-modified to incorporate a new flat-plane crankshaft that gives it a unique soundtrack, but more importantly, more performance.
The 430kW of the AMG GT R Pro has been easily surpassed, with the Black Series pumping out 537kW of power and 800Nm of torque.

The seven-speed dual-clutch transmission has been modified to handle the increased torque.

It’s enough to launch the Black Series from 0-100km/h in just 3.2 seconds and even run to 200km/h in less than nine seconds. It will keep going to a top speed of 325km/h – assuming you can find somewhere to legally and safely do that. While based on the GT3 and GT4 racing versions of the coupe as expected, the aerodynamic changes we mentioned earlier this week, based on the teaser video, are even more extreme than first thought.

The new carbon fibre front-splitter, for example, has two adjustable settings – Street and Race. The former is obviously for road use, but if you take your Black Series to a track you can extend the splitter forward to create a front diffuser that generates more downforce. According to Mercedes, that leads to more downforce on the front axle which helps improve both the handling and the steering feeling and response.

The new all-carbon fibre bonnet has two large exhausts and is another motorsport lesson. It extracts air from under the bonnet to further increase downforce whilst also aiding engine cooling. It’s a similar story for the front guards which also feature louvres to channel air from underneath the wheel arches. And that’s not the end of the changes, because while you can’t miss the top-side tweaks there are upgrades underneath that you can’t see. There is an “almost fully” panelled underbody that helps to channel the airflow to the rear diffuser. The diffuser in question looks like it belongs on the GT3 racer, running the entire width of the rear to generate even more downforce.

But the crowning glory of the new aero package is the rear wing; or as AMG calls it, the “two-stage rear aerofoil concept”. Made from (unsurprisingly) carbon fibre, the rear wing features two planes that are manually adjustable to allow the driver to tailor the handling to the circuit.

The low plane – positioned between the wing supports – is smaller but specifically designed to receive the air coming from the front of the car. While the upper blade of the wing is wider it also features a movable flap that is electronically controlled up to 20-degrees. It’s linked to the AMG Dynamics driving modes and is able to adjust on the move to enhance downforce or reduce drag spending on the conditions. 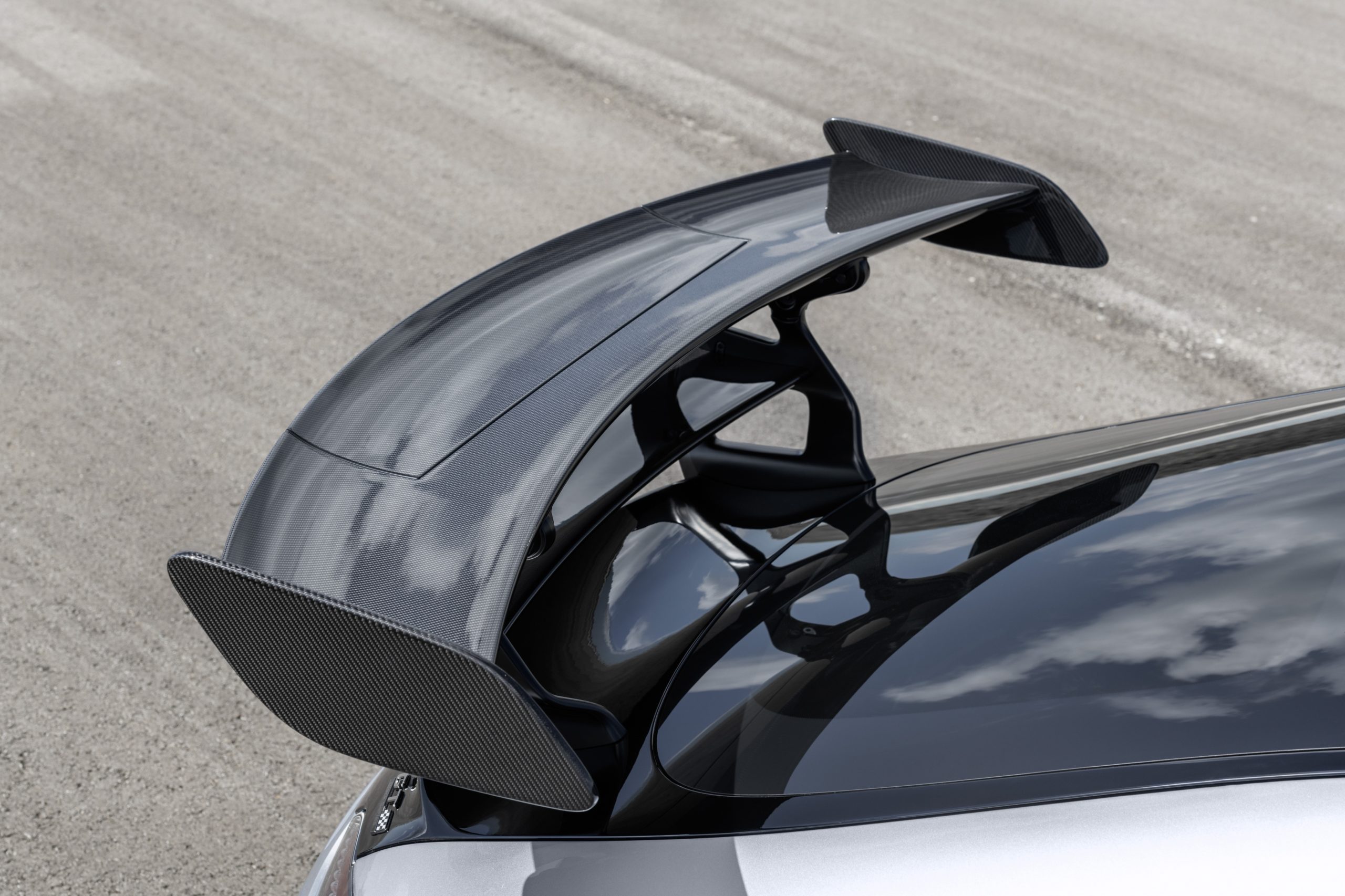 Of course the changes don’t end there, with upgrades to the suspension to further improve handling to ensure the GT earns its place in the pantheon of Black Series track-weapons.
AMG started with the same coil-over suspension with adaptive dampers used on the GT R but has upgraded the hardware to include a carbon fibre torsion bar – for less weight and greater strength.

The AMG Dynamic drive mode system has been enhanced to include a Sport Plus setting (above Comfort and Sport) that is able to detect the racetrack surface and adjust accordingly – even down to the difference in smoothness between Germany’s Hockenheim and Nurburgring Nordschleife. 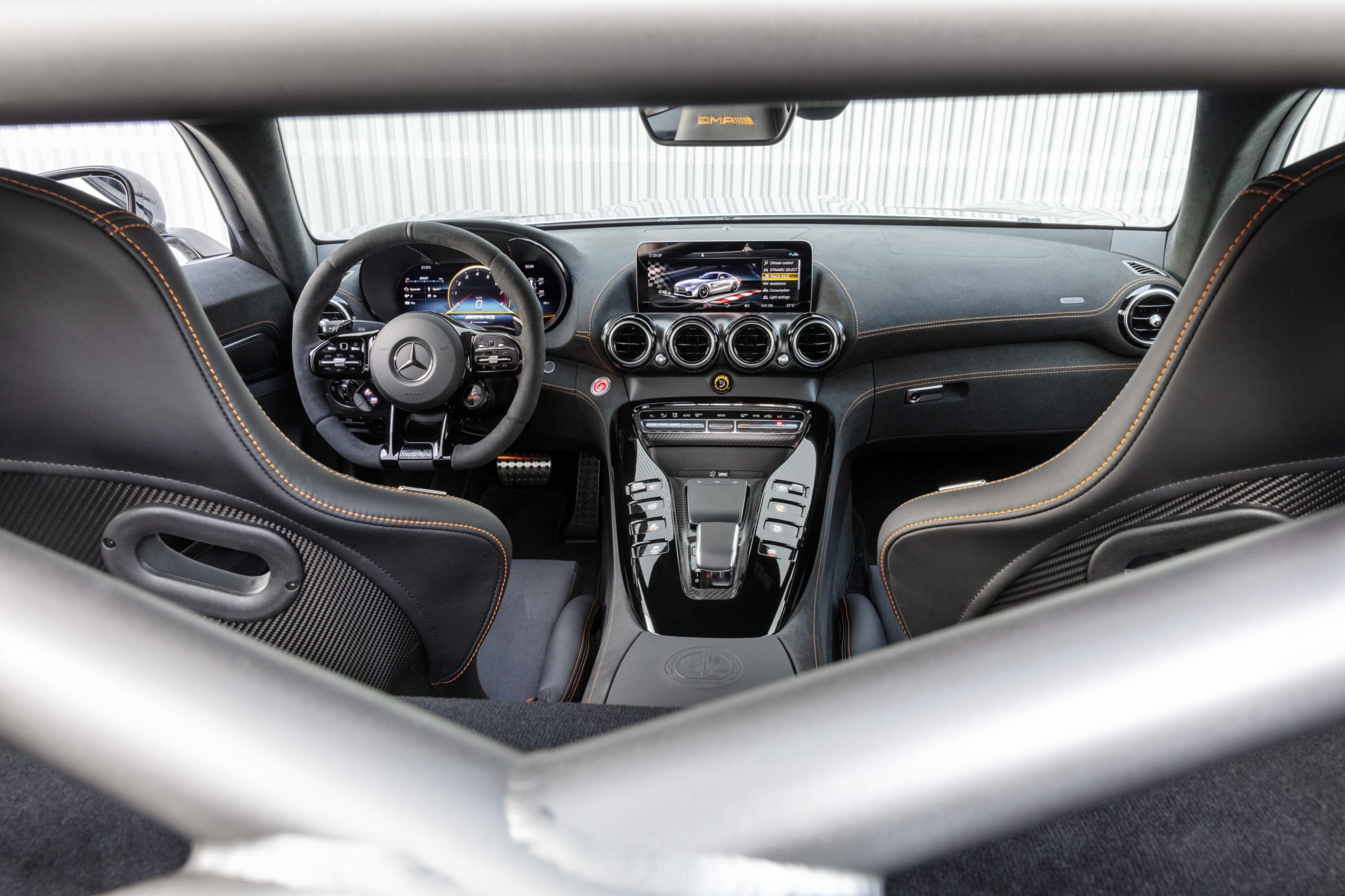 Stopping power is handled by carbon ceramic high-performance brakes. The black calipers nestle behind the unique and staggered lightweight wheels – 19-inches at the front and 20-inches at the rear.

The wheels are wrapped in Michelin Pilot Sport Cup 2 MO rubber that has been specially designed for the Black Series with the French tyre firm. The standard tyres is a soft compound for road use but AMG also has a harder compound available for (inevitable) track use.

No official word yet if any Australians have managed to secure a piece of AMG history yet.