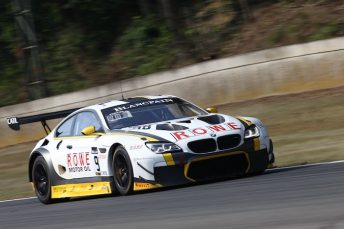 St. Ingbert, 4th June 2017 – ROWE RACING came away empty-handed from their racing debut at the somewhat outdated iconic track in Zolder on Whit Sunday. A week after the magnificent second place at the 45th ADAC Zurich 24h race at the Nürburgring, the St. Ingbert team, and Markus Palttala, narrowly missed out on the points despite a pursuit in the Blancpain GT Series Sprint Cup race on the former Formula 1 track, finishing 12th.

Finn Palttala, who lives in Eupen in Belgium, was in action at his “home race” in the #98 BMW M6 GT3 alongside his fellow countryman Jesse Krohn, and from 25th on the grid they were “brought down” by a rival in the qualifying race, and denied a better position despite making up four places on the first lap. He had moved up into 14th place by the time he handed over the car on the 18th lap. After the driver change, Krohn defended his position successfully against a rival intent on attacking, and made up a further two places in the final phase when two entrants ahead of him were involved in a collision. In the overall standings of the Sprint Cup, the two Finns dropped from third place to 13th.

The two BMW works drivers António Félix da Costa of Portugal and Philipp Eng of Austria were extremely unlucky in the #99 sister car. After a controversial decision, the duo had all their qualifying lap times voided due to allegedly leaving the track, they managed to gain starting position 14 in the qualifying race. In the race, former DTM driver Félix da Costa made up six places on the very first lap, but as they were in eighth place on lap four, they were spun by a car attacking from behind. The driver from Portugal was forced to let almost the entire field pass him, before he could re-join the race in 30th; the rival was not penalised and finished the race in fourth place. By the pitstop, Félix da Costa had made up five places, but damage to the car caused by the incident would have taken too long to repair, forcing the team to retire. This meant that Eng, who was barged out of the race in the pitlane directly after taking over the wheel at the previous sprint race in Brands Hatch in Britain, was not called into action this time around.

After the physically and emotionally intense Nürburgring week and now the blow in Zolder, the ROWE RACING team has two race-free weekends to look forward to and can take a bit of a break. Their next outing is on 24th June in Le Castellet in the South of France.

Hans-Peter Naundorf, team principal ROWE RACING: “Zolder wasn’t worth the journey for us. A professional series such as the Blancpain GT Series shouldn’t be racing on a track like that with outdated infrastructure, which makes it impossible for the stewards to monitor the racing action properly. On top of that, the track has hardly any opportunities for overtaking, but has many walls and crash barriers that can cause permanent damage to the expensive GT3 cars so I am pleased that our cars came away from this weekend mostly unscathed. I hope there will now be some constructive discussions about this track and that a different decision will be made for next year. The fact that many cars such as our #99 had lap times voided due to marshal judgements made by eye rather than electronic monitoring or video images is unacceptable. No one was even able to tell us on which curve we allegedly left the track. And I don’t understand why no penalty was awarded when a car – even though it was unintentional – was spun from behind because the race organisers don’t have enough information available. I feel sorry for our drivers and our team, who didn’t do anything wrong. The sporting performance was there and #99 would have been able to make it into the top 5 despite everything. Many thanks to everyone in the team who always gave it their all and prepared the car perfectly these past weeks. They really have earned the break.”