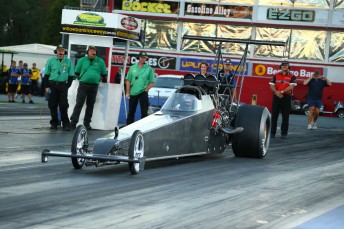 If the Managing Director of Australia-wide luggage leader Zelows has his way this weekend, there will be a new face in the Top Alcohol field at the upcoming FUCHS Winternationals (5-8 June).The professional level Top Alcohol bracket is known for methanol-fuelled dragsters, funny cars and ‘altereds’ capable of travelling at more than 400 kilometres per hour.This weekend the 46 year old Zelow, of Narangba in Queensland, will use the Winters Warm-Up (the official test weekend for FUCHS Winternationals entrants) to attempt to licence in the bracket so that he may make his competitive ‘professional’ debut at the largest championship drag racing event held outside of the USA. As a long-time sportsman competitor the Willowbank Raceway quarter-mile is a home away from home for Zelow, but that doesn’t stop him respecting the enormous challenge before him – a challenge further heightened by the fact that he took delivery of his Top Alcohol dragster from the United States only weeks ago.“I have been racing in the sportsman ranks since 1996, and time and time again I have been taught that you have to keep the respect for these cars and this sport, it is forever challenging,” said Zelow, the 2010/2011 Willowbank Raceway Track Champion (Competition) who plans to also keep racing his Competition dragster if timing permits.“As far as successfully licensing at the Winters Warm-Up it is hard to be completely confident but we are definitely as well prepared as we can be given the car arrived on the eighth of this month!“It is going to be a big learning curve for us for sure, but I am quietly confident and we will just take small steps – we have two days at the track to get it done, so hopefully that is what we will do!”After a long-time in the sportsman ranks where racing within a set time frame (dial-in) is often par for the course, Zelow said there were three key reasons behind his decision to make the jump to the professional Top Alcohol ranks.“Firstly the attraction of going as fast as possible in every pass was a real drawcard – it is the great addiction of drag racing to always want to go faster, but in the sportsman ranks that isn’t always the best way to win races,” said Zelow, who purchased his near-new Top Alcohol dragster from the US’ Speed City.“Secondly my good mate Graeme Frawley has been working with the Bray family and has learnt a lot about these engines, giving me the confidence that my team can handle the challenge to run one of these packages.“Finally – I am getting old! If I don’t do it now, I won’t do it at all, so it is time to bite the bullet. To be honest, to even be trying this out – I am super excited, it is real dream come true to have this opportunity and I can’t wait to get into the car and bring up those revs that these Alcohol cars are famous for and run my first five second pass!“I have been running to the fence to see guys like Steve Reed and Gary Phillips in action for years, so to be looking at lining up against them is pretty incredible.“There is a lot of work for us to do – the approach for instance has to be completely different to what we are used to with a lot more of a ‘business’ approach, but I know we can do it.”As part of the household name Zelows, this racer has the right experience to build a business structure around his racing pursuits.“My brother Colin and I have run the company my parents started in 1973 for the past 25 years, I am mainly responsible for general operations, leasing and finance but like most family businesses you can find yourself turning your hand at pretty much every role of the business from time to time,” said Zelow, sponsored by Zelows Travel Goods and Handbags and David Mullins Automotive.“It is a great business and like drag racing, I love it because of the people involved.“The sport of drag racing also appeals to me as a business person due to its competitiveness, and like business it rewards those who are driven to always do better.“It is a great sport for getting away from work as well – I get to the track and the last thing on my mind is the latest in luggage brands, I think it is important to have a hobby outside of the workplace.“Most that I work with don’t know that I do this away from the office, and when they find out the reaction is usually one of surprise – mostly just at what it is that I am driving!“While at times it is hard to juggle these two sides of my life – the racing and the business – I enjoy both so it is easy to put in the extra effort to make sure both sides prosper.“There are a lot of people who help me do that – my wife Dallas and children Brianna and Trent, my team, Colin Zelow, Ben Blakey, Damien Foy, Paul Martin, David Mullins, Jamie Regan, Graeme and Bob Frawley and of course Speed City (Dianna Harker and John Bojec) – I couldn’t be doing this without all of them.”The FUCHS Winternationals will be held across the Queen’s Birthday long weekend (Thursday 5 June to Sunday 8 June 2014), with 430 racers from all across the country and New Zealand to compete in front of approximately 30,000 spectators across the four days.