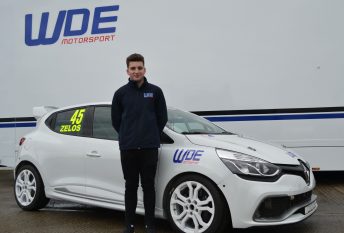 The gifted young Norfolk ace graduated to the UK Clio Cup last year following a brace of competitive campaigns in the Ginetta Junior Championship that had yielded two victories and multiple podium finishes. Joining Ciceley Motorsport for the step up, Zelos proved to be quick and luckless in equal measure behind the wheel of his distinctive, Evergreen Tyres-sponsored Clio – with persistent misfortune conspiring to deny him the results he deserved.

Be that as it may, the highly-rated Dereham-based hotshot showcased his palpable pace and potential by qualifying an outstanding third amongst the 23 high-profile protagonists on his debut at Brands Hatch Indy, claiming two further top six grid slots at Thruxton – the fastest and most fearsome circuit in the country – and taking the chequered flag inside the top ten at both Snetterton and Rockingham.

Zelos made the most of the winter break to evaluate his options for 2017, and after speaking to a variety of teams, he has put pen to paper to race for WDE, where he will benefit from the mentorship of three-time series champion Paul Rivett. To say that he is keen to get going would be quite the understatement.

“We’d been talking to WDE on-and-off for a while,” explained the 18-year-old Norwich University of Arts Graphic Design undergraduate and former Dereham Sixth Form College student. “I first met [Team Principal] Wayne Eason over a year ago, and he’s always been quick to sing my praises – he seems to really believe in me and in what I can achieve, which means a lot.

“I want to thank Ciceley for giving me a great opportunity last year – the BTCC test in particular was an awesome experience – but heading into my second season, I felt it was time for a new challenge and the prospect of learning from the best in the business was impossible to turn down.

“At this stage in my career, being able to work alongside somebody of Paul’s calibre will be hugely important to my development as a driver. You don’t win three titles by accident, and he focusses closely on the engineering and set-up side too – nobody knows or understands this car and championship better than he does.

“Last year was certainly character-building for me – it was a big step from Ginetta Juniors, and four retirements from the first five races left us immediately on the back foot. Having always been so consistent, that knocked my confidence and at the same time, there was so much to get my head around. We only had limited testing before going into the season and I had to get used to both front wheel-drive and slick tyres from scratch.

“We showed flashes of form and I was really beginning to get to grips with it all in the latter stages. Although we never seemed to have much luck on our side, that toughened me up mentally and I feel much more positive and stronger in myself going into my second season in the Renault UK Clio Cup.

“The competition is shaping up to be extremely hot again, with a big grid and a lot of very quick drivers – and with the elimination of dropped scores, the new points system will prioritise consistency. I can’t wait to get back out in the car to begin testing with WDE. I have everything at my disposal to succeed and I’m really looking forward to seeing how we get on. The objective has to be to come out-of-the-blocks fighting fit, and I want to be regularly inside the top ten and targeting podium finishes by the second half of the season. Who knows, maybe we can even look at sneaking a win later on…”

Eason and WDE Team Manager Rivett are both eager to see how their new protégé fares in his sophomore campaign, and are bullish about Zelos’ ability to shine in a fiercely-disputed championship that has in the past helped to catapult the likes of Andrew Jordan, Sam Tordoff, Mat Jackson and Ashley Sutton onto BTCC superstardom.

“We were lucky enough to be at Brands Hatch on the day that Dan first drove a Clio towards the end of 2015, and we’ve wanted to get him on-board ever since because he stood out right from the start,” enthused Eason. “I can’t tell you how excited we all are about working with him.

“He’s a great lad and I think one of the most impressive things about Dan is his attitude and the professional manner in which he conducts himself – he is mature beyond his years. Even when he had traumatic weekends last season, he always kept his composure and never once overreacted or threw his toys out of the pram – he has a wise head on such young shoulders, which is very commendable.

“It was quite clear to see that Dan lacked confidence last year. I don’t think it’s any exaggeration to say that the Renault UK Clio Cup is the toughest series on the TOCA support package and typically, it takes drivers two or three years to be able to fight consistently at the front – last year’s champion Ant Whorton-Eales is a case in point.

“The Clio is a notoriously tricky race car that takes a while to master, and for various reasons Dan never had the opportunity to demonstrate what he is capable of in 2016 – but he nonetheless showed a great deal of promise and he will be a lot stronger going into his second season. I think he will really benefit from the wealth of experience and fantastic team spirit here at WDE, and I genuinely believe Dan can win races this year – with podium finishes at the very least.”

“I’m delighted to welcome Dan to WDE,” echoed Rivett. “He is a very exciting young prospect and I’m really looking forward to assisting him to work his way up the grid. He has a lot of talent and raw speed and so much more potential than he was able to show last year. The Renault UK Clio Cup is such a difficult championship, and I think people on the outside sometimes underestimate that.

“There’s no question that he is more than capable of podium finishes and as a team, there is plenty that we can offer him. He has all the tools here that he needs to progress his career, and our job is to provide him with a car that is consistently quick at every circuit we visit. There’s a real family atmosphere at WDE – we do this because we enjoy it, because we want to be the best and because we want to win – and Dan fits in with that philosophy perfectly.”