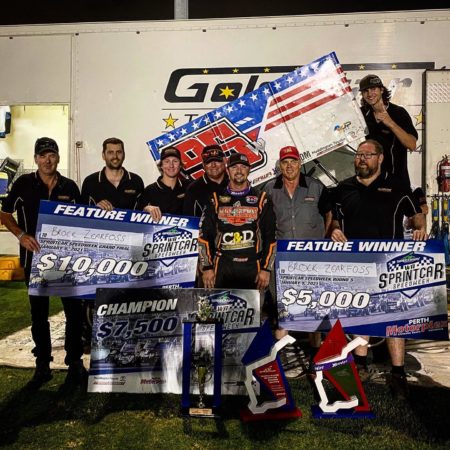 As the saying goes, there is no I in team, and that was certainly the case when it comes to summing up American Brock Zearfoss’s successful WA Speedweek Series campaign with renowned Western Australian-based car owner Sean Carren.

In what was his maiden Australian racing trip, the 30-year-old from Jonestown in Pennsylvania linked up with Carren, and to say that it was a successful partnership would be quite the understatement, which saw Zearfoss claim three out of the six WA Speedweek Series rounds.

Apart from Carren supplying top shelf equipment in the form of the WA # 95 AAA Metal Recycling supported Maxim car, Zearfoss’s trip was made possible thanks to the efforts of rival car owner Geoff Kendrick and fellow racer in American-based Australian Lynton Jeffrey.

“I can’t thank Sean (Carren) and his family enough for helping bring this whole deal together, but also Lynton (Jeffrey) for throwing the idea my way and everything done by Geoff (Kendrick) behind the scenes, so it was certainly a collective effort by a fair few people,” explained Zearfoss, who upon entering Australia had to go into mandatory quarantining for a fortnight, which saw him spend the time trying to do what exercise he could and also prepare as much as possible WA Speedweek Series research.

“To be honest, I had no idea what to expect coming over to Australia and how the family was going to be that I was driving for. The Carren family – Sean, Dot, Renee, Josh and Rachael – took me in as a random stranger that they only knew of four weeks earlier and treated me like I was one of their own, and they are some of the most genuine people I’ve ever met.

“With so much uncertainly around the world with travel restrictions, especially in Australia, this whole trip was put together fairly quickly, and within the space of a month, I was on my way to Australia, but there was quite a lot of red tape that I had to get through at my end, but I made it work.”

Aside from the support of the Carren family and Kendrick and Jeffrey, Zearfoss was helped throughout his Australian trip by the long-standing pit crew that Carren had assembled that dates back to over two decades and also has multiple generations of pit crew members.

“The pit crew consisted of Brand and Jet Passmore, Brenton and Kenneth Puddey, Ross May and Neil Fancote, and I’m very thankful for all of their efforts throughout my trip to give me a great car every night,” expressed Zearfoss.

“During my time with Carren and his team, I was able to learn so much about Carren and the WA # 95 car’s history within the sport, and it was an honour to get the opportunity to drive for him. I think it was pretty cool for the pit crew to include two generation members in the Passmores and the Puddeys and also many members that have worked with the team for over two decades, which speaks volumes of the team and the future for the sport.”

As a result of these consistent front-running performances over the six rounds, Zearfoss picked up the overall WA Speedweek Series point standings win and, in the process, created history by putting in one of the best first-up WA Speedweek Series campaigns for a visiting American driver.

Summing up his WA Speedweek Series campaign, Zearfoss was rapt with his first trip to Australia and everything he experienced over his five weeks in the country.

“I had a really enjoyable trip and not just all of the on-track success but being able to spend time in Australia and everyone – from the teams to the race fans – I met along the way,” expressed Zearfoss.

“To be able to race at a world-class facility like the Perth Motorplex and also compete at Bunbury Speedway and Ellenbrook Speedway were very memorable moments and a wonderful experience. This truly has been an experience of a lifetime and I can’t wait to come back.”

Zearfoss admits that his successful WA Speedweek Series run is going to buoy him well for his exciting 2021 American campaign.

“2021 is going to be a very exciting year for myself, as I’m going to be running the full World of Outlaws schedule for the first time,” he said.

“Unlike previous off seasons, I’m going to have six race meetings under my belt, so hopefully I can hit the ground running for my first full-time World of Outlaws tilt.”

Zearfoss and Carren would like to thank their WA Speedweek Series supporters: