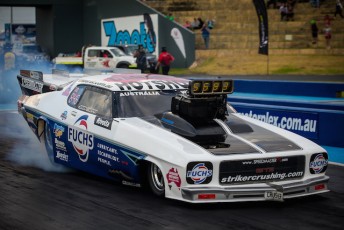 Shot at NitroSlam at Perth Motorplex

The West Australian leads the 400 Thunder Pro Slammer standings and has a 0.1-second advantage over Garry Phillips after recording a 5.8291-second pass at 404.04km/h last night, but Zappia said he’s watching his back.

“I’ve got to be on my game and make sure my reaction times are where they need to before the first round,” Zappia said.

“There are a few guys that have run 5.8-seconds already, and any of them could step up. They’ve all got power; it’s just a matter of getting down the track. Mark Belleri, Daniel Gregorini, Grant O’Rourke are all up there.”

Rain prevented the second and third Pro Slammer qualifying sessions being run as scheduled and will be contested ahead of eliminations today.

Zappia said the extra runs today are taking their toll on his nerves.

“Not having enough time to do proper maintenance between runs makes me a bit nervous,” he said.

“I would have preferred to have all night to do maintenance. The motor has one run on it and today we’ll have to do all these runs – it makes for a big day to do five runs if you make the final.

“The car’s running well, but there’s still a bit of tuning needed to get it to where it needs to be.” 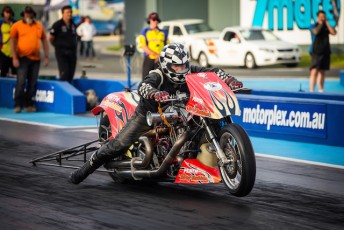 Shot at NitroSlam at Perth Motorplex

Meanwhile, Mark Drew is looking to go back-to-back in Top Bike and heads into the final session in the top spot.

The local Harley Davison rider set the benchmark time of 6.9754 seconds at 320.56km/h in his first run, a tenth of a second quicker than the turbo Kawasaki of Greg Durack.

Qualifying gets back underway from 11:30 AWST, with eliminations from 1:30.