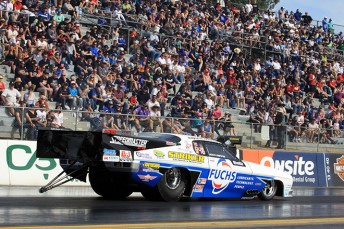 Aussie Drag Racing legend and Top Doorslammer Champion John Zappia could add lucky number #7 to his six consecutive titles since 2008 this weekend at the Fuchs Spring Nationals in Adelaide.

The Fuchs/Striker Monaro has been a dominant force yet again this season coming off three successive ANDRA Drag Racing Series victories to hold a 138 point lead over his nearest rival Stuart Bishop.

Zappia is confident progression through the first round on Sunday should be enough to clinch the title or at the very least heap more pressure on Bishop.

“I’m pretty sure we only need to go past the first round,” says Zappia.

“We’re 138 points ahead. If we both get through the first round, then he can only gain 140 more points if I lost there and went out in the first round in Sydney (at the Australian Nationals).

“He needs to win this event and the next event. There’s a mathematical chance that is pretty well over if we get through the first round.

“If we qualify well we should have an easier run in the first round. He qualifies pretty well in Adelaide, he was second last year so we shouldn’t meet until the final like the final we should have had at Calder Park (at the Southern Nationals).”

According to Zap, aside from a Championship showdown the fans at Adelaide International Raceway can expect some lightning quick times as he attempts to break his own track record.

Running over 1000 feet instead of the usual 1320 feet quarter mile, Zappia feels the four-second barrier is realistic with a pass of somewhere in the 4.9 second zone at 230 mph.

“The track was good (last year) and I’m expecting a natural progression. Each time I’ve gone there the track has got better and better.

Featuring 11 drivers vying for a spot in the eight-car field, Top Doorslammer promises to be a headline attraction alongside Pro Stock Motorcycle and the 8000 horsepower Top Fuel dragsters making their first appearance in Adelaide since October 2012.