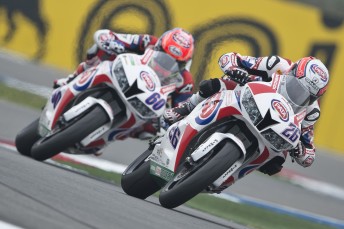 Pata Honda rider Lorenzo Zanetti is hoping to emulate his team-mate Michael van der Mark this weekend (9-11 May) as the World Supersport championship heads to his home circuit at Imola in Italy for round four.

Dutch rider van der Mark, 21, was in imperious form at his own – and his team’s – home race at Assen in the Netherlands two weeks ago, setting a blistering pace on his Honda CBR600RR in practice and riding away from his rivals in the race to take his debut World Supersport victory by 10 seconds.

Lorenzo, 26, is from Brescia, just two hours from Imola, and the Italian has recovered well from a debilitating finger injury sustained at the opening round at Phillip Island in Australia. He finished fifth in the Assen race, despite not being a big fan of the Dutch circuit.

Both Pata Honda riders are in their second year of World Supersport racing and aiming to build on their impressive debut seasons in 2013. Both will be targeting the podium in Sunday’s 17-lap race at Imola’s 4.936km Autodromo Enzo e Dino Ferrari.

Michael van der Mark: “My first World Supersport win was very special, especially as I was able to do it at my home race – that was an incredible feeling. Now we go to Imola, which is a really special track with a lot of history. I love this place and it’s not like any other, it just feels like a real race track.  Last year the result wasn’t that good but I think, with the improvements we made to the bike over the winter, we can be fighting for the podium. I’m really looking forward to the weekend, which is also the home round for Pata, our sponsor, so it will be a busy weekend. Without these people we cannot race so, with a lot of their guests there, too, we will push even harder.”

Lorenzo Zanetti: “I’m so excited to be going to Imola to race again. I left Assen with a really good sensation from my CBR600RR and fifth place was a not so bad finish because it’s not my favourite track. But Imola is definitely one of my favourites so I will be targeting the podium for sure. The track suits my riding style and I really like older tracks like this one and Donington. Because it’s my home race, I will have a lot of people supporting me – friends, family and sponsors – so I want to find a good way quickly so I can be fast from the start of the first practice and get the bike ready for Sunday’s race.”