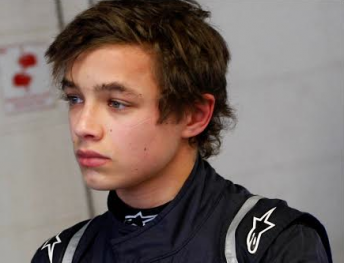 MEDIA RELEASE: International motor racing drivers are starting out in the sport younger than ever.

Over half the field in this summer’s Toyota Racing Series which starts at Ruapuna near Christchurch on January 16 and 17 are too young to drive on public roads in their own country or have only just qualified for a civil driving license.

But because they have graduated through kart racing and in most cases at least one season of single seater competition they are licensed by world motorsport authorities to race in the five round series.

Lando Norris from England and China’s Guanyu Zhou are both 16, but can’t get a civil driving license in their own country until they are 18.

Kami Laliberte and Devlin Defrancesco have only been able to get their Canadian license in the last few months since their 16th birthdays.

Seventeen year olds Jehan Daruvula from India, Argentina’s Nicolas Dapero and Brazil’s Pedro Piquet will have to wait until they are 18 before they can drive on public roads in their respective home lands.

And the quartet of 18 year olds, Ferdinand Habsburg from Austria, Poland’s Antoni Ptak, Bruno Baptista of Brazil and Julian Hanses from Germany are only just old enough to get a license in their home country.

New Zealand’s two drivers in the series, Taylor Cockerton of Pukekohe and Christchurch’s James Munro are 17 and 18 respectively.

Being a teenager on the way up is almost a pre-requisite for success as drivers can start karting at a young age – Norris was just seven and already has nine years experience under his helmet.

In fact 20 year olds Will Owen from the USA and Frenchman Timothe Buret are the odd men out, while Theo Bean from the United States will be the old man of the Toyota Racing Series at just 23.

All drivers in the TRS use the same car, an Italian built chassis to international Formula 3 regulations, with a modified 1800cc Toyota motor producing 145 kWs on an ethanol bio fuel.  The engines and computer management systems are sealed.

The only changes teams and drivers can make to the car during race weekends, are the suspension and brake setup and adjustments to the aerodynamic “wings”.

The Toyota Racing Series is run over five consecutive weekends, with practice on the Friday, qualifying and one race on the Saturday and two races on the Sunday.

The full series schedule is.-