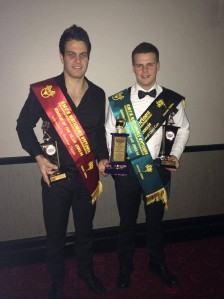 The 2013/14 Victorian AMCA Nationals season has drawn to a close and the end of season results were revealed at the recent presentation night held in Geelong.

The much coveted Rookie of the Year title went to Jamie Mills, with his older brother Mathew finishing runner-up to complete a one-two finish for Mills Brothers Racing ahead of third placed Dean Heseltine.

In addition to their Rookie of the Year honours, the two-car Melbourne based team also took home the Best Presented Crew award, topping off a great first campaign in Speedway for the duo, who are second generation racers taking after their father Wayne Mills who is the team’s Crew Chief.

Jamie and Mathew finished 6th drivers that didn’t compete at an interstate title or the Australian title which all count for double points.

The team intend to step up their involvement in their 2014/15 campaign with plans to compete at multiple state titles and their first Australian title in place.

The 2014/15 season kicks off at Avalon Raceway on October 18th Speedway the following Saturday night.

MBR thanks Phil Munday’s Repair Management Australia and OPS Gateway Industry Solutions for their support in the team’s maiden season.