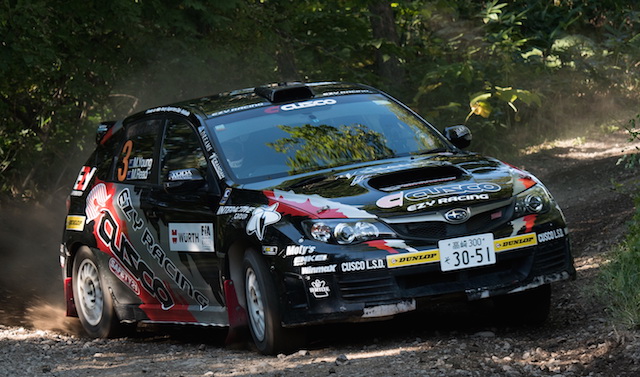 The 21-year-old New Zealander said that so many things were replaced, it could be termed a brand new car.

Ezy Racing’s formidable machine met with a debilitating accident in the previous round in Malaysia just a month ago, but Young said that it wasn’t the accident that made them overhaul the car.

He said a car could afford only a limited number of rallies on its components and they had to be changed constantly in order to be competitive.

“The car has got a brand new engine plus a new gearbox. They’ve also changed the suspension completely,” Young said.

“It has even been given a new bonnet and fender due to the accident we had last time. Even back in Malaysia we changed a lot of parts like the lower arms and chamber. It’s almost brand new. It had a pretty big birthday really.”

“It is a lot of work to change the engine over, the gear box and suspension within a day. Cusco team which is Ezy Racing’s Technical partner has done a tremendous job as the car got delayed to arrive here due to an issue with transportation. It arrived just two days ago and the Cusco team has been working tirelessly on doing all the replacements. All the problems have been fixed and the car’s almost brand new,” assured Young.

“It is safer to have a new engine. They can only do so many rallies with an engine. I suppose the engine we had was fully used. It needs to be in mint condition. It’s the same with the gear box. It’s done a few rallies so it was time for it to be changed ahead of Japan, China and India, this season” he added.

Young was also pleased with yesterday’s official testing. “It was good. We managed to do a lot of changes. Changed the car to suit my driving and to suit the conditions here.

“We changed the suspension and started adjusting it from zero to get to where I like it. So, at the moment we have a really good balance for the twisty corners and fast tracks of Hokkaido. The stages here are really, really fast” he said.

Young who was third overall in the APRC championship coming to the fourth stage and the first stage of the Asia Cup segment of the event, had a nasty accident and crashed out just ten minutes from the start in Johor Bahru.

It resulted in Ezy Racing failing to complete the first day and finishing without any points. However, Young who had not had a single accident till then for more than two seasons, said that he used the time since the rally to access what went wrong and correct his mistakes.

“I went home and reset myself. Looked at the data and looked at everything to see what went wrong and what we could’ve done better. Coming here, we made better plans. Thought about the rally more and really focussed on doing well here” claimed Young.

However, this is the first ever season on a Four-wheel-drive car and he felt his relative inexperience with it also had a part to play for the accident in Malaysia.

“Speed was a factor. I had been driving like I was driving a two wheel drive. If it was a two-wheel drive, I could have probably stopped the car.

“A four wheel drive with that extra weight was never gonna stop in time. And how the weight moves was a big factor. Of course, locking the breaks was never a good idea. Probably I should have put the car more sideways,” Young said revealing what he learned from the analysis of the accident.