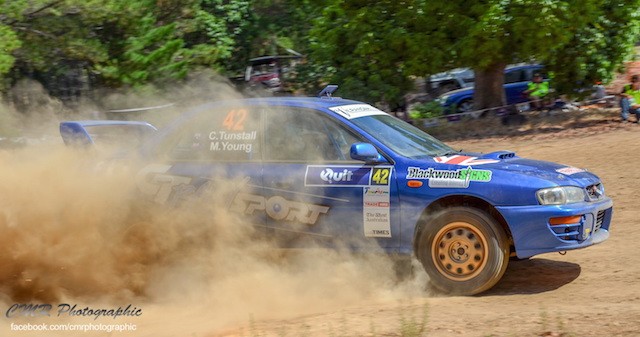 MEDIA RELEASE: New Zealand rally driver Michael Young is set to tackle his first rally event of the year, at the Quit Forest Rally in Western Australia (WA) this weekend, ahead of his 2016 Asia Pacific Rally Championship (APRC) campaign.

The 23 year-old originally from the Bay of Plenty, is driving in his first event of the year with WA local and rookie navigator Cameron Tunstall in a Subaru WRX GC8.

“I’m really looking forward to the Quit Forest Rally and getting back into a car. It’s going to be great preparation for my next rally which is only a few weeks away back home in New Zealand, though I’m just going to enjoy this rally and take it easy,” said Young.

“Cameron [Tunstall] is new to co-driving but luckily he’s had some good tips from other co-drivers who have done this rally a lot. It’s actually his car I’m driving so we’ve done a swap in our roles… Hopefully he doesn’t get too nervous during the ride,” joked Young.

Young also says rally organisers and the local council have done a great job getting ready for the event, with a new spectator-friendly area following a number of landscaping changes to Barnard Park, along with ensuring the roads are in perfect condition for the inevitable high speed action.

“The roads are going to be a real joy to drive on,” said Young, “and I enjoy the fact organisers change the way [direction and configuration] stages are run each year to keep it fresh and exciting.”

Young added: “We’re also lucky to have Dean [Herridge] and his team looking after the car this weekend. I’m sure they’ll do a fantastic job as they always do.”

The first APRC on Young’s calendar event takes place in Whangarei, New Zealand from 29 April until 1 May.