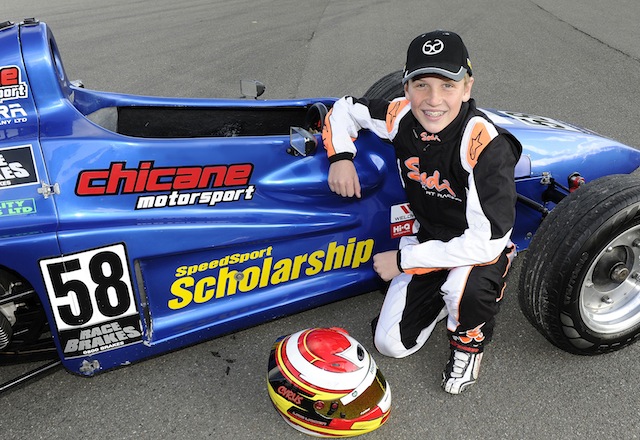 Lawson was a leading contender for the $50,000 prize package from the moment the elimination rounds started at the Manfeild race circuit and put in a commanding performance both on and off track to win the scholarship on it’s 15th anniversary.

The Pukekohe teenager started karting at the Mt Wellington track in Auckland when he was 7-years-old, winning a host of national titles along the way.

Lawson is the same age as 2001 winner Nic Jordan.

The runner-up prize was won by Ari Pettigrew, 16, from Rangiora who came to the scholarship from a background in grass karting.

The weekend was made even more special for the SpeedSport Scholarship founders with triple NZ Grand Prix winner and TRS champion Nick Cassidy winning a Formula 3 race in Japan, V8 Supercar star Shane van Gisbergen drove his team’s factory McLaren to victory at Silverstone, England and GP2 rookie Richie Stanaway won the Formula One support race at the Monaco Grand Prix and dedicated his win to the SpeedSport Scholarship.

“We couldn’t have asked for a better weekend on our anniversary,” said Martin, who’s Sabre Motorsport team run the winner in the New Zealand Formula First championship.

Lawson will begin his car racing career in two weeks time when he lines up for the Manfeild Winter Series as preparation for the national series later in the year.

The SpeedSport Scholarship winner receives an all expenses paid year racing 12 events in a Formula First car under the guidance and tuition of Martin, including the Manfeild Winter Series and the New Zealand Formula First championship.

A personalised race suit, boots and racing gloves are provided to the winner from Chicane.