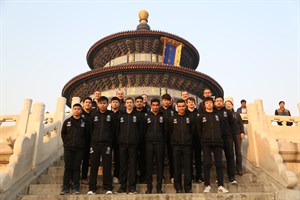 It features 12 drivers from 10 countries across the Asia-Pacific region who face a variety of driving examinations, fitness tests and assessments of off-track skills including presentation abilities between 4-7 November.

Held in Beijing, China for the first time, the event is being jointly hosted by the Federation of Automobile Sports of China (FASC) and the Confederation of Australian Motor Sport (CAMS).

The drivers gathered at one of Beijing’s most famous landmarks, the Temple of Heaven, where they took the opportunity to meet each other and representatives from FASC and CAMS and also to take group photo in front of the landmark.

CAMS General Manager of Motor Sport, Michael Smith, said it was a moment to saviour both personnel and drivers attending the event.

“What we have here in Beijing is a talented group of young individuals who are representing their country. It’s an exciting thing for them to be here soaking up the sights in China and also competing for such a prestigious prize. There is little doubt they have earnt their right to be here, but CAMS and the FASC, under the FIA Institute Academy, want to find out who can go the next step and represent their country on the world stage.” Smith said.

The winner from each selection event will be guaranteed a place on the Academy with a further four wild card places up for grabs.
The Academy is open to drivers aged 15-23 that have demonstrated ability and excellence in motor sport competition so far.

For the first time in Academy history, six qualifying events have been held, to enable as many drivers as possible to participate.
Last year’s Asia-Pacific selection event was won by India’s Akhil Rabindra, who saw off rivals at Sydney Motorsport Park in Australia.

“Akhil was a worthy winner at Sydney last year in the selection event overseen by CAMS and we can only hope we see someone emerge with the same calibre as Akhil at this event here in China. We wish all twelve here the best of luck and may the best driver win. From an Australian point of view, we have two drivers here in Aidan Wright and Macauley Jones who are willing and ready to give it their best shot.” Said Smith.

FIA National Sporting Authorities (ASNs) were asked to put forward their nominations, which were then assessed by the FIA Institute. ASNs in this region were allowed two nominations each, to actively encourage development of drivers. To meet the minimum criteria for entry, competitors were required to have demonstrated strong performance in national competition so far in their careers.

The 2015 Young Driver Excellence Academy is a fully-funded training programme, designed to help drivers develop their careers, whilst improving safety skills both on and off the track. Featuring tuition from a variety of motor sport experts, the Academy promotes the values of fairness, responsibility and safety.

The drivers below are taking part in the Asia-Pacific selection event: