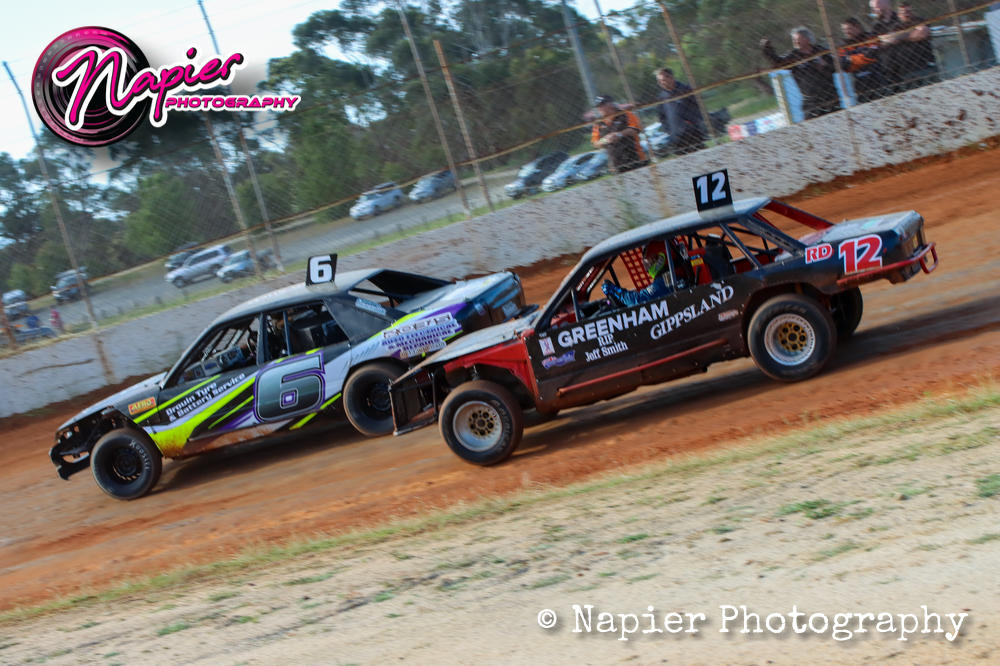 The Division 2 Hot Rods will crown a new winner after last year’s champion retired after the victory, Scott Laidlaw. Leigh Mitchell current number 2 and Scott Angus current number 3 are firing up for this weekend and Mitchell has been right in the thick of the race action this season at the front of the Division 2 Hot Rod racing with Trent Wilson and Troy Hutchison, those three are expected to figure right at the lead of the field once again.

A number of the competitors are more than capable of a podium, a top five or even the win so it’s no gimme for this seasons form racers. Bob Devine, Rob Tatterson, Peter Angus, Kane Gibson, Jordan Haley and others could all mix it up at the front.

The Junior Standard Saloon entry numbers are not high this weekend however many competitors are in pull down mode of their cars in preparation for the Victorian title at Alexandra Speedway in April. Jack Braz from the Latrobe Valley, Beau Stuchbery from East Gippsland Bree Walker from the Valley are drivers likely to be very competitive with Nyora represented by a new rookie driver, Blake Taylor.

Ally Morrison the Victorian Ladies Standard Saloon champion leads the nominations for the fast femmes’ with Sarah Price, Maddison Miles, the returning Hayley Hutchins and Kath George or representing the local club. Morrison is a red hot favourite a week after retaining her number one roof plate.

Speedway Sedans Australia Junior competitors have a field also affected by an upcoming national and state title, however a couple of visiting drivers have nominated to give their cars a shake down and most of our local cars are entered. Jayden Bryant is the stand out driver in the field however expect Kiarna Barton, Jessica O’Donnell, and Logan Mair to keep him honest.

A strong line-up has nominated in the Standard Saloons with new state number 2 driver Rhys Lansdown leading the charge. Lansdown will compete against Kacey Ingram, Ally and Dale Morrison, Mitch Foster the state number 3 ranked competitor in the class, Mark and Chris Miles and Dean Spring amongst others.

All the action on Saturday starts at 5pm whilst the gate will be open for public from around 11am for entry if you purchase tickets online via the link available on social media, it will cost $20 for an adult, Kids 12 to 16 are $10 each whilst all other children are free and Seniors are $10, Family ticket of two adults and two kids 12 to 16 is $50. Prices are slightly higher at the gate in cash. Adults from $25.