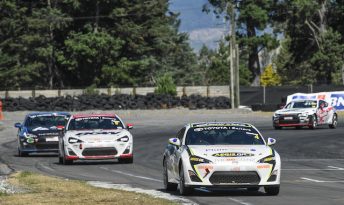 MEDIA RELEASE: He has run hard against the toughest opposition all season, now at his home track Ryan Yardley has maintained his championship lead and now holds the category lap record at all three circuits to date.

Though Albany’s Reid Harker was the dominant force on track, Yardley is proving the value of consistency in single-make championship racing. Without winning a race this weekend, he has consolidated his championship lead as the title race heats up.

In the first race of the weekend, Reid Harker rebooted his championship aspirations with dominant performance, effortlessly propelling the Aegis Oils TR 86 to victory ahead of Michael Scott and championship leader Ryan Yardley.

“The car went faultlessly through qualifying, I’m really pleased with our pace here this year. Last year we were down on speed but the car’s been magic so far this weekend.”

Yardley kept his championship hopes alive with a well-driven run to third, harrying second-placed Michael Scott throughout the race. Yardley set a new track lap record for the category, a 1:36.256 and now hold lap records at all three circuits.

The second race this morning was a partial reverse grid that put Matt Lockwood out front alongside pole man Connor Adam. Lockwood was making sure of the start having crashed his Placemakers car in practice.

Adam got a bad start and Tom Stokes pounced, shooting through into second place with Andy Knight looking to do the same.

Two laps later, Knight made contact with Stokes’ car and the latter was spun off the track.

Behind them were Brody McConkey and championship leader Ryan Yardley.

When Andy Knight was black flagged over the Stokes incident, Yardley sealed his position over McConkey and held on to the flag, though behind the flying Lockwood.

In the third race of the weekend Harker was once more on winning form, stretching out a lead of more than three seconds over a shortened 12 lap distance. He was followed home by the International Motorsport team of Michael Scott and Connor Adam.