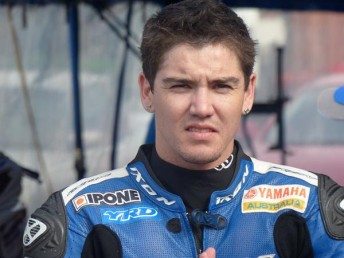 Yamaha Racing Team’s Rick Olson is looking forward to getting some of his old aggression back at the fourth round of the 2014 Swann Insurance Australasian Superbike Series this weekend.

The event takes place in Winton – where Olson has had a good run in recent times, and the YRT rider says he will be looking to be far more aggressive than he has been so far in 2014.

According to Olson, that will be the key to getting onto a podium which is where he feels he belongs.

“The first session felt pretty good and today has been a confidence booster heading into the weekend,” he said.

“Hopefully I can get back to the pointy end like last year and try and get a good result, but overall I am feeling pretty good.

“As my teammates have proved from the previous rounds, we are capable of running at the front.

“Some tracks don’t favour us as much as others but for myself this year, I haven’t been aggressive enough and really get the aggression back and pump myself up to want to win, and I think if I can get that back I can run at the pointy end.”

Olson said that while he doesn’t enjoy riding in wet conditions, they seem to bring him good results.

“I definitely seem to go alright in the wet.

“I don’t like the wet – I don’t think anyone does but some are definitely better than others in the wet and I seem to like the wet.

“Having said that, I hope it’s a dry weekend!”

And Olson is hoping he can channel his previous good form at the track and make this weekend one to remember for the right reasons.

“I seem to do well at Winton – I have done well here in previous years, so hopefully I can get it all together, try and get some of that aggression back and try to get up the front.”