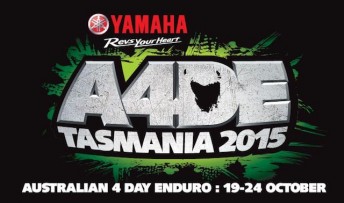 MEDIA RELEASE: bikes – Yamaha Motor Australia have again secured the naming rights to the nation’s most prestigious off-road motorcycle event, the 2015 Australian Four Day Enduro (A4DE), to be held in Tasmania from October 19-25.

The 2015 edition of the Yamaha A4DE will take place in the scenic and historic town of Wynyard, with over 300 riders competing in a range of special tests and travelling through some amazing countryside over four grueling days to determine Australia’s best two-wheeled off-road warrior.

“Yamaha has a proud racing heritage and supporting major events such as the A4DE show our commitment, passion and support for Australian riders in off-road racing,” Yamaha’s Motorsport Manager Ray Howard said.

“Tasmania provides a beautiful backdrop to this year’s event, and it is sure to be one of the best yet as Yamaha has planned plenty of activities and promotion around the race.

“It promises to be the highlight of the off-road calendar and we will work closely with the promoting club and Motorcycling Australia to make the event one to remember for all competitors and their supporters.”

“It’s great to have Yamaha on board again as the naming rights sponsor for the 2015 Australian Four Day Enduro,” Gilson said.

“Yamaha have long been involved with the promotion of the A4DE and are pivotal to the development and promotion of off-road motorcycling racing within Australia.

“We look forward to presenting a world class event in conjunction with Yamaha in Tasmania come October.”

The format for the 2015 A4DE will see riders travel through trail sections each day on their way to a range of special tests per day where the riders race against the clock.

The culmination of these timed tests (around six per day including the final motocross test), as well as ensuring each check point is made on time will determine the winner.

To stay up to date with all the news from the 2015 Yamaha Australian Four Day Enduro, make sure to visit the A4DE website and Facebook page.