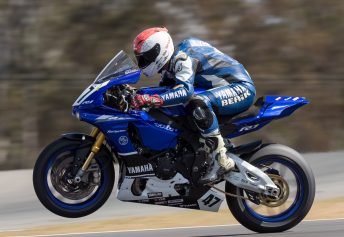 In a riveting YMI Superbike Race One, the ‘Wayne Train’ Wayne Maxwell took a sensational Race One victory after storming through the pack. Troy Herfoss (Crankt Protein Honda Racing Team, CBR1000SP2) crashed with ten laps to go, blowing the Championship wide open. In a phenomenal ride Corey Turner (Desmosport Ducati, 1299 Panigale) secured a second place finish for his debut race on the Ducati. Pole sitter Halliday finished on the podium.

Halliday (Yamaha Finance, YZF-R1) took off well from pole position but it would be Josh Waters (Team Suzuki ECSTAR, GSXR-1000R) to lead into turn one, with Herfoss and Bryan Staring (Crankt Protein Honda Racing Team, CBR1000SP2) in tow. Early in the race, Waters, Halliday and Herfoss pulled a massive gap to fourth place. With ten laps to go Herfoss lost the front, crashed at YMI corner and broke his handlebar. With the bike too badly damaged to continue.

After Herfoss’s crash Maxwell was on an absolute charge through the field, after qualifying in seventh place for the start of the race. Maxwell was the only rider able to race consistently in the 1:13’s throughout the race. Maxwell fought has way up to second and was right on Halliday’s tail. Unfortunately for Halliday he ran wide at YMF corner and that handed Maxwell the lead. Turner also managing to overtake Halliday soon after.

Maxwell would maintain first position until the conclusion of the race to take a victory to remember. His ability to maintain the sensational grip from the Pirelli tyres, key to the Race One win.

Staring had to retire after smoke was visibly coming from the belly pan of his Honda. A disappointing result, after the well experienced racer was riding in the top five for the duration of the race.

In the end, it was Maxwell, Turner and Halliday that took Race One podium honours in a thrilling race that had the crowds whipped into a frenzy. Waters and Daniel Falzon (JD Racing, Yamaha YZF-R1) completed the top five.

Maxwell shared his thoughts after the win; “I got a reasonable start and I was very aggressive from the start. We just managed to find our rhythm and really settle into the race. We had a plan and we executed. We have never really had that one lap pace but we knew over a race distance we would be strong.”

Halliday wrapped up a superb weekend on Sunday at Warwick, with his first YMI Superbike win of 2017, whilst Maxwell and Herfoss also secured podium results.

YMI Superbike riders had to focus hard in order to avoid any mistakes and Halliday did just that to register a win. Starting from first on the grid, the New South Wales rider ultimately beat Maxwelll across the line by a second, with Herfoss just over a further one and a half seconds back.

At the start of the race, Halliday managed to take the lead into turn one, followed by Staring, Waters and Herfoss. Lap two featured an enormous amount of crashes with Falzon, Beau Beaton (Racers Edge Perform, Ducati Panigale) and Matt Walters (Kawasaki Australia, ZX-10R) all going down in a short amount of time. Halliday, Herfoss and Waters now had a significant buffer at the front.

By lap four, Maxwell looked on for a repeat of Race One as he caught up to the three battling at the front. Herfoss managed to take the lead with 10 laps remaining, behind them Turner and Robbie Bugden (Kawasaki BCperformance, ZX-10R) were battling hard for fifth place. Bugden attempted to overtake Turner but crashed out after the attempt failed.

Halliday managed to retake the lead from Herfoss, leaving the Honda rider to battle it out for second place. Maxwell overtook Herfoss on the penultimate lap, by that time Halliday had managed to build a massive gap.

Halliday crossed the finish line in first, with Maxwell in second and a third place for Herfoss. Maxwell now leads the Championship with 193 points, ahead of Herfoss with 188, Bugden despite crashing out is in third with 172 total points.

Halliday shared his reaction after taking the win; “It’s great to get the win on what is a privateer outfit that’s mostly family owned, I’m sure that we’ll celebrate and I’m looking to back it up at my home race in NSW in two short weeks time.”