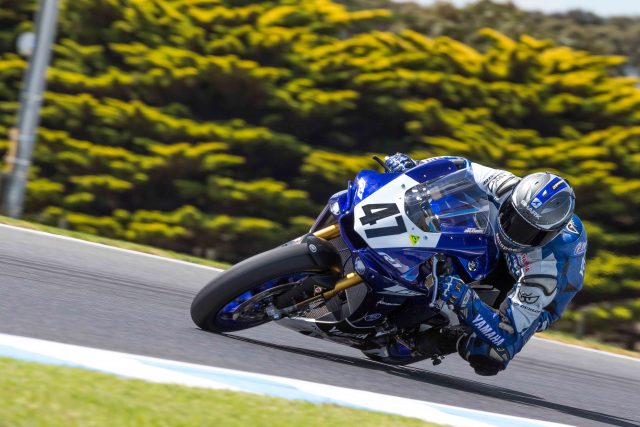 Maxwell shared his thoughts after topping the Yamaha Motor Insurance Superbike timesheets, pulling a 1:33.952 on his final lap; “We ran two bikes with two different setups to try and find a bit of direction for this race. I think we’ve found a setup that will work and that showed in our results.

“There are high spirits ahead of 2017, with the addition of live TV and all the work that’s going in behind the scenes from Motorcycling Australia and the ASBK team, it’s all going in the right direction. It’s the strongest field of past and present champions we’ve had in Superbike. Yamaha have been working really hard in the off season with Dunlop. All of these things combined make for a great result!” Maxwell concluded.

“It was the first session out and the first time the Suzuki has turned a wheel! Despite this we ended up in P4! Not bad considering we only got the bikes last Friday. Unlike us all the main players were here at the Official Test Day in January,” Waters explained.

“Considering I’ve only just got the bike, I feel that I am really gelling with the GSXR after only 10 laps, and I see no reason that I won’t improve further over the weekend. It’s a real credit to the team.” He finished.

Yet another category success story is that of Robbie Bugden on board his Kawasaki BC Performance ZX10 (1:34.826) who finished hot on the heels of Waters.

Mark Chiodo (Repsol Gas Racing) trumped Thursdays’ Motul Supersport practice session on his Triumph 675R, lapping the Island in a 1:36.885, almost a full two seconds ahead of Ryan Taylor (Pablo’s Motorcycle Tyres, YZF-R6, 1:38.568). With literally nothing in it, Ted Collins (Next Gen Motorsport, GSX-R600, 1:38.754) was nipping at Taylor’s heels.

Keep up to date with all things ASBK – by visting the ASBK Facebook Page and Website for all the current news, results and media.