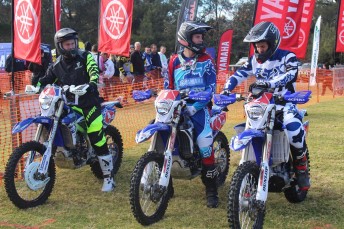 The tranquil surrounds of Riverwood Downs, near Dungog NSW, roared in to life today as the 2014 Yamaha Australian 4Day Enduro officially began with the prologue sorting out the race order for the week.

More than 230 riders have descended on the mountainous region to battle it out over 4 Days of grueling Enduro racing action.

CDR Yamaha’s Chris Hollis completed the YMI test fastest today to ensure he leaves first at the commencement of racing on Wednesday morning.

Completing a double for CDR Yamaha, 2013 overall champion Daniel Milner will take off second behind his teammate Hollis.

“It’s not a massive advantage but it gives you a bit more confidence to be the quickest guy there.

“You know you’re on par already for the start of racing tomorrow.”

After walking the tests yesterday, Hollis can’t wait to get stuck in to the dust conditions this week.

“The tests are awesome, I’ll head out again now that we’ve finished prologue and get ready for tomorrow.”

Lachlan Stanford (Husqvarna) and Josh Green (Active8 Yamaha) round out the overall top 5 in both overall and E2 classes for Active8 Yamaha.