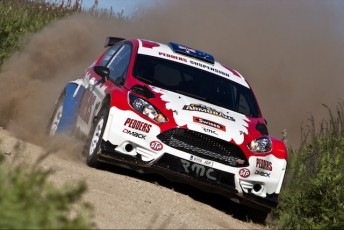 MEDIA RELEASE: Having just completed his first day at the wheel of the Ford Fiesta R5 he will campaign during this year’s WRC2, Scott Pedder has admitted he’s about to have a baptism of fire when the Rally de Portugal gets underway on Thursday – but that he’s going to relish every second of it.

Pedder, the reigning Australian Rally Champion, elected to contest the feeder class of the FIA World Rally Championship this season instead of defending his domestic title.

At the time of his announcement he explained that it was a case of fulfilling his long held ambition to race in the WRC and that entering WRC2 allowed him to gauge his speed and prowess against drivers who’d come from similar National and Regional Championships.

Little did he know though that his debut event, this weekend’s Rally de Portugal, would attract the largest and strong WRC2 field in the sport’s recent history.

Twenty-seven drivers including Pedder and co-driver Dale Moscatt will take the start line, amongst them multiple domestic Rally Champions and even the reigning Dakar Rally winner.

“It’s incredibly exciting to face a field of such talented drivers,” said Pedder.

“When I decided to enter the WRC2 this year I really wanted to test myself. Well, by the end of Portugal, I’ll certainly have done that and I’ll have no doubts where I stand as a driver.”

The car Pedder will drive is built to the FIA R5 regulations, meaning that while it visually resembles the outright factory World Rally Cars it is in fact restricted to a slightly lower level of horsepower.

That didn’t stop Pedder from finding its limits during the first of two days testing in Northern Portugal.

“It was my first time in the car and it was just amazing! The way it handles is just incredible, I just can’t compare it to any other rally car I’ve ever driven in the past.

“We managed to take the rear bumper off the car early in the day grazing it against a bank, and then I had a real crack on the last run and dislodged the front bumper too on a tight, downhill corner.”

The short, two-kilometre stage Pedder described as extremely tight and twisty, and was chosen to introduce him to the most difficult conditions he’ll face during the course of the upcoming weekend.

“As a driver it’s important to know what you can and can’t get away with, especially coming out of a very different car to this competing in the Australian Rally Championship.

“Using this stage was as bad as it will be during the rally, so everything else I’ll face now will be better. That gives me confidence because I felt that today went really well,” said Pedder.

Pedder and the RMC team who will run his Ford Fiesta R5 this season have a further days testing ahead today where he’ll be able to compare his time against a host of other WRC2 contenders.

“This will be the official test of the rally for all the teams, so there will be more cars and the stage will be much longer, we believe five kilometres.

“It will be interesting to compare our pace against some of the other drivers on what I’m hoping will be a much wider and faster road that the one we used today.”

Having now tasted the car Pedder has said that his expectations for the rally remain unchanged.

“I know we aren’t going to be on the outright pace of the drivers who have competed in WRC2 previously, they have far more experience in these cars, in some cases a couple of years.”

“The advantage for me is that this is a brand new rally for everybody. No one has driven on these roads previously and that means we’re all starting from the same point in regards to local knowledge of the roads and conditions.

“I’m confident that we can build up our speed over the weekend and be on a good pace with the top drivers by the end of the rally,” added Pedder.