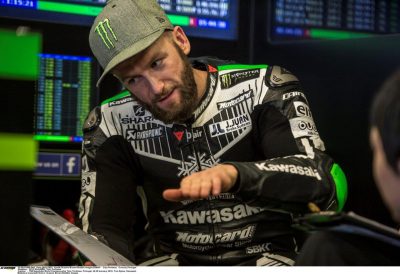 The 2018 WorldSBK field is now preparing to head Down Under for the start of the 2018 championship at Phillip Island on February 23-25 following the completion of European testing at Jerez and Portimao over the last week.

Familiar names have again graced the top of the timesheets in Europe, with Tom Sykes (Kawasaki Racing Team) the fastest in the two-day hitout at Jerez on January 23-24, before his world title-holding teammate Jonathan Rea took over the top spot at the undulating Portimao layout in Portugal on January 28-29.

Turkey’s Toprak Razgatlioglu (Puccetti Kawasaki) was the pick of the WorldSBK rookies.

When the WorldSBK caravan hit Portugal, it was Rea’s turn to take the front running ahead of Lowes, Camier, van der Mark, Razgatlioglu, Sykes, Laverty, Davies, Melandri and Torres.

“We have ticked all the boxes and the feeling with the bike has improved,” said Rea, “I have woken up, because in Jerez last week I was still fast but I did not feel 100 per cent on the bike. Here I was much better on the first laps.”

Kawasaki will be the most represented manufacturer on the WorldSBK grid in 2018 with six bikes, followed by Ducati, Yamaha and Honda with three apiece. Aprilia and Suzuki are next with two each, and then MV Agusta and BMW with the single entries.

The WorldSBK and WorldSSP teams will now pack their containers before making the long trek to Australia, with the final pre-season test to be held at the Phillip Island Grand Prix Circuit on February 19-20 ahead of the Yamaha Finance-backed season opener for the 2018 MOTUL FIM Superbike World Championship.

In a first for WorldSBK, all three-day ticket holders will also gain a free paddock pass in 2018, bringing the fans closer to the stars. Once in the paddock, you can attend autograph sessions, rider media conferences and enjoy the on-stage entertainment.

A three-day pass costs $120**. Add camping at the circuit campground for up to four nights, with spectacular views over the track and Bass Strait, and you have the perfect location for a summer long weekend away with your mates or family.

Feel like spoiling yourself? Opt for a Bar SBK pass at $260** and gain access to three undercover facilities, or go for a VIP option in the fully catered suites above pit lane.

Kids under 15^ are admitted free for world superbikes – and so is your bike.

For more information, visit www.worldsbk.com.au or call the Superbike Hotline on 1300 728 007.