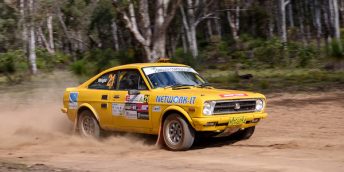 The iconic Alpine Rally gets underway in Lakes Entrance in north east Victoria next week with eight West Australians drivers and co-drivers contesting the historic gravel rally for the first time. It’s Australia’s oldest and largest.

The world’s second oldest rally after Monte Carlo, the Alpine Rally starts on Friday 1st December and finishes on Sunday 3rd December with competitors covering 725 kilometres, of which 375 kilometres are competitive.

The entry list is at capacity with 125 cars all of which are at least 25 years old; the Historic Rally Association received 300 expressions of interest.

In keeping with the essence of the Alpine Rally of being a test between man and machine rather than technology, vehicles must not be turbo charged or 4WD.

One West Australian co-driver isn’t worried about that. Ben Searcy, who recently read notes for Nathan Quinn in his winning Australian Rally Championship drive, will this time be calling for Simon Evans.

“Simon and I have done lots of rallies together since I started as his co-driver in 2012. He’s a great driver and learnt to drive from roadbooks the old-school way so he reads the roads really well. Not doing a recce doesn’t bother me at all,” Searcy said.

“The first blind rally we did was in Adelaide, Rally of the Heartland, and I was packing it. But we won that by over nine minutes in the Datsun and it wasn’t nearly as scary as I expected,” the 37-year-old said.

“To be lined up with 125 other great cars is exciting, and it’ll be exciting with Simon as he only knows how to drive two ways, flat out and then even faster,” the HR Manager from East Vic Park said.

Leading a WA convoy of four drivers, Onslow Contracting Director Hugh Harmer who said the Alpine Rally is one he’s always wanted to do.

“The guys are just as excited about the 3,700 kilometre road trip to get there as they are about the rally!” the 64-year-old said.

“This rally is a bucket list for every rally driver in Australia – it doesn’t matter who are you, it’s equal and fair, no super turbo, no four wheel drive – I reckon it’s a beautiful event and in a beautiful place.”

Competing a 1979 VB Commodore with a 253 engine producing 178-horsepower in the back wheels with co-driver Mitch Gray, Hugh said he reckons he has the best car in Australia.

“Oh, she wouldn’t win a race in a fat fit, but she’s a beautiful car to drive. She’s a crowd attractor – groupies follow the car because they love the sound of her,” the soon-to-be retiree said.

“Our number one goal is to finish the event and have great fun doing it. Then I want to retire and keep rallying for the next ten years – that’s why we’re sponsoring the WA State Championship.”

Belhus resident Hugh is keeping it in the family and his son Shane Harmer is also competing in a 1981 Holden Commodore.

“I’m excited and a bit nervous but I’ll be okay once I blow the cobwebs out. The car is in good shape and we stripped it back and put in a new tail shaft,” 36-year-old Shane said.

Mark Travers, 35, of Bunbury is also joining the Harmer convey to compete in his maiden Alpine Rally in his 1983 Toyota Sprinter with co-driver Jeremy Edwards of Roland.

Another Alpine Rally rookie but no stranger to 2WD rallying is Julian Wright of Willeton.

“I’ve got a classic car and to be at an event with 125 classic cars is going to be amazing. I’ve watched the Alpine Rally for years and I’m looking forward to the challenge,” the owner of Network IT said.

“I’m only worried about the stage conditions – I’m used to driving on WA’s ball-bearing gravel not the limestone dusty stages they have there.

“The preparations have been long and arduous but now car is in great condition with a new gearbox and looks the goods with a new paint job,” Wright said.

Co-driving for Wright is his former co-driver of five years ago Jeff Huggins who is from the Gippsland.

Event Director Owen Polanski said that historic rallying was the most popular rally form in the world and Australia was no different.

“As well as that, the cars are incredibly exciting to watch,” Polanski said.

The Alpine Rally started in 1921 making it the world’s fourth oldest motorsport event after the Monte Carlo Rally, the French Grand Prix and Indianapolis.