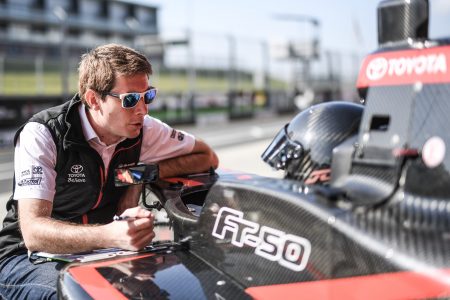 Toyota Gazoo Racing New Zealand’s Nicolas Caillol is heading overseas to spread the good oil on the new-look Castrol Toyota Racing Series – which looks set to be bigger and better than ever before from 2020 onwards.

Hot on the heels of the category’s announcement of a new car – the FT-60 – category manager Caillol leaves New Zealand this week to market the category and meet prospective drivers aiming to sharpen their experience and skills during the northern hemisphere winter months.

First stop on the major tour for Caillol will be Europe where he will visit France for round four of the French Formula 4 Championship which takes place at Circuit Lédenon on July 6th and 7th. The following weekend Caillol will visit the Red Bull Ring where the Italian Formula 4 Championship, the Formula Regional European Championship and EuroFormula Open all have rounds. Belgium is next with a trip to the iconic Spa Francorchamps for round four of the British Formula 3 Championship on July 20th and 21st. It will be Spa again the following weekend when he will attend round eight of the Formula Renault Eurocup.

Caillol will then travel to the United Kingdom for round six of the British Formula 4 Championship at Snetterton in Norfolk on August 3rd and 4th. He’ll then head to Brands Hatch a week later for the finale of the new all-women W Series, before concluding the European leg of his trip with the fifth round of the German ADAC Formula 4 Championship at the Nurburgring over the weekend of August 17th and 18th.

In September, he’ll also travel to Sebring for the sixth round of the 2019 F3 Americas Championship and the fifth round of the United States Formula 4 Championship over the weekend of September 13th and 14th. His United States trip will conclude with him attending the final of the Road to Indy series – which has just announced a partnership agreement with the Castrol Toyota Racing Series – at Laguna Seca the following weekend.

Many of the categories Caillol will visit currently have drivers who are graduates from the five round New Zealand series. He is hopeful that having a presence at these race meetings will help cement plans in drivers’ minds for January and February 2020.

“With the new car confirmed and launched we have already had a huge amount of interest in the 2020 series,” he explained. “We’ve had even more since the FIA confirmed that drivers can count Super Licence points from a winter championship like ours along with their summer championship points-haul instead of only being able to include one or the other.

“Now we have a golden opportunity to take this message out to the world and to dozens of drivers coming up through the ranks in the various junior formulae categories around the world. The Castrol Toyota Racing Series is entirely relevant to all of those drivers as a viable and important stepping stone in their motorsport careers. It offers a great range of tracks, television, competitive racing and above all, incredibly good value for money in terms of the kilometres the drivers will cover, which is well in excess of 3,000 over the course of the five rounds.

“We’re confident that with the level of interest in the new car, and the increasing relevance of the series on the global stage, this trip will definitely help us fill the grid for 2020 and may even secure drivers for our 2021 season.”

The 2020 Castrol Toyota Racing Series will begin in January at Highlands Motorsport Park near Cromwell in New Zealand’s South Island. It takes in additional rounds at New Zealand’s South and North Island circuits before concluding in February with the New Zealand Grand Prix, one of only two events outside of Formula One recognised by the FIA as a Grand Prix event.