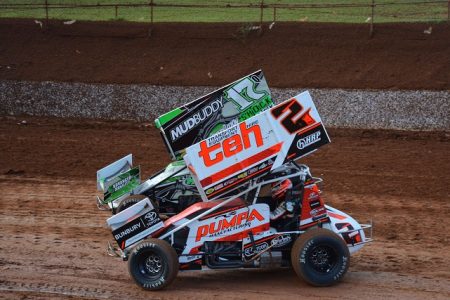 This Wednesday night (January 9) is the final chance to catch World Series Sprintcars in Queensland this season when round seven of the championship is decided at Ausdeck Patios Archerfield Speedway. Following the huge weekend that was the Australian Sprintcar Open, the WSS teams will again face off against 10-times World of Outlaws champion Donny Schatz and fellow WoO star Logan Schuchart in a bid to avenge the dominant display from the American duo in the Australian Open final. Schatz will be determined to clinch another win in what will be his final appearance before returning home while Schuchart, having finished runner-up behind Schatz in his last two feature race starts, will no doubt have other ideas. The pair will again be joined by Californian hard charger Carson Macedo for a three-pronged USA assault.

It was hardly surprising that national champ Kerry Madsen emerged as the best of the Australians last weekend, racing into third place in the Australian Open final to narrow the gap in the chase for the World Series crown. Whilst Madsen was a cut above his countrymen on that occasion, a fourth-place finish from Steven Lines was enough for the South Australian to maintain his series lead. At the very least, Madsen needs to make sure he outpoints Lines again on Wednesday night to narrow the margin further with only the Western Australian rounds remaining. Also firmly in series contention is defending champion James McFadden, who currently sits third overall some 47 points adrift of Madsen. If the four-time WSS champion can produce something akin to his Preliminary feature race performance from last Friday night, he will leave Brisbane in a very strong position to retain his crown.

Other interstaters who performed strongly on the weekend and will be back in action on Wednesday night include Tasmanian youngster Jock Goodyer, Sydney’s Jessie Attard and the Victorian trio of Rusty Hickman, Jamie Veal and Jye O’Keeffe, while 9-times WSS champion Brooke Tatnell struggled to make much impression on the weekend and will be looking for a much stronger showing this time around in the lead-up to the Australian Championship, which will be staged at Archerfield on January 26 and 27. Of the locals, Lachlan McHugh is the man of the moment following his stunning run in Saturday night’s 50-lap feature race that saw him surge from 16th to finish sixth, rounding up the likes of Macedo and McFadden along the way. It was a welcome return to form for McHugh and he looms as a real threat. Throw in Luke Oldfield, Peter Lack, Andrew Scheuerle and the rest of the local stars taking the fight to the visitors and another epic Sprintcar showdown seems a certainty.

Gates open at 4.00pm (3.30pm for online ticketholders) and, with Compact Speedcars and Modlites also on the program, there will be early racing from 5.00pm, with Sprintcar time trials scheduled for 5.30pm and the main program to get underway from 6.00pm.