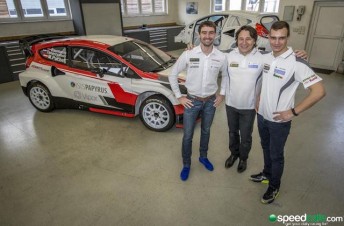 For 2016, however, Stohl has decided to focus on the engineering side of rallycross and will support MJP Racing at all 12 rounds of the Championship with the team’s Ford Fiesta RX Supercars.

Timerzyanov, who drove for Ford Olsbergs MSE in 2015, commented: “Having had several options for 2016, I made a conscious decision to join a great team with an amazing car,” explained the 2012 and ‘13 European Rallycross Champion from Kazan in Russia.

“The level of the Championship is growing including team and car development plus more fantastic drivers are joining all the time.

“I’m really happy to be a full-time member in such a dynamic team that overachieved in 2015. This year will not be any easier but we all know that I am ready for it – now I am just waiting for the light to go green!”

Joining Timerzyanov is Latvia’s Baumanis who made his debut for the Austrian-based squad at last year’s season-closing race in Argentina.

“I am thankful for the opportunity with World RX Team Austria,” said Baumanis, the reigning Super1600 Champion. “It was brilliant to race with the world’s best drivers in Argentina and I was so happy that I could reach the final on my first outing with the team.

“I learned that World RX Team Austria has a fantastic group of people and a perfect atmosphere, which made them an easy choice for 2016. Max has invested a lot into the car’s development for this year, and Stohl Racing has performed some technical miracles.”

Team owner Max Pucher concluded: “2015 was a tough but exciting first year for the team. We reached the semi-finals regularly and the fact that we made the final in the last two events of the year shows how competitive both the team and the car were.

“Timur and Janis have an excellent track record in rallycross and now it is our responsibility to give them the best possible support with both the car and the team. Personally I am looking forward to competing in Euro RX this year and to race at some of the fantastic World RX tracks.”