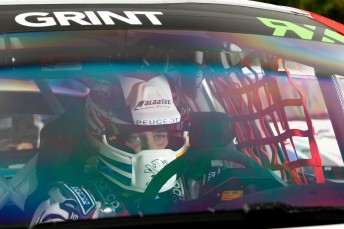 James Grint to drive RX car at Festival of Speed

MEDIA RELEASE: The FIA World Rallycross Championship presented by Monster Energy will be represented at this year’s highly-acclaimed Goodwood Festival of Speed.

Among the impressive line-up of cars starring at this year’s event (26-28 June) will be an Albatec Racing Peugeot 208 RX Supercar, which will see Euro RX driver James Grint negotiate the iconic Goodwood Hillclimb against the world’s best drivers and riders.

Over 300,000 people are expected to attend the three-day festival, which has a theme this year of ‘Flat-Out and Fearless: Racing on the Edge’.  It will also be the first time that a rallycross Supercar – which accelerates faster than a Formula One car going from 0-60mph in 1.9 seconds – has taken on the Hillclimb since World RX regular Liam Doran back in 2013.

The Hillclimb is the main attraction at the Festival of Speed, and takes place across the weekend incorporating a challenging white-knuckle ride along a 1.16-mile course.

Starting from the tree-lined southern corner of the Goodwood Estate, the course rises over 300ft from the start line to the finish, as it sweeps past the front of the magnificent Goodwood House, before climbing a steep and narrow estate road towards Goodwood’s racecourse on top of the South Downs.

Grint – who partners Frenchman Jerome Grosset-Janin in the Albatec Racing team which currently tops the FIA European Rallycross Championship standings – commented: “I’m really excited to be part of Goodwood Festival of Speed this year – I’ve been going to the show since I was about six years old and have always dreamt that I would be one of the racing drivers screaming up the famous Goodwood Hillclimb. Now my dream is becoming a reality. I hope to put on a good show for all the rallycross fans.”

“I would love to be there myself to watch it, however I’m busy competing in the double-header British RX round at Mondello Park. I’m sure James and the rest of the team will represent Albatec in the best possible way though.”