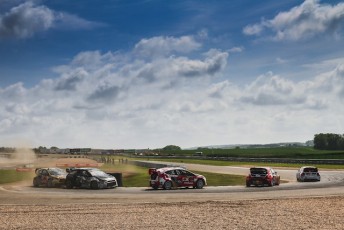 Round four of the FIA World Rallycross Championship presented by Monster Energy takes place over the Spring Bank Holiday in Great Britain this weekend (23-24 May) as the Championship prepares for its fourth event in five weeks.

Lydden Hill – which is considered the sport’s spiritual home – shot to fame earlier this year when the track was used to film a World RX feature that aired on BBC Top Gear.

The show, which saw James May learn to drive an RX Supercar against the Championship’s greats, was broadcast to millions of people worldwide.

Jeremy Clarkson declared the sport as “brilliant” and James May stated rallycross was “pound for pound the most exciting sport in the world.”

Now, two months after Lydden Hill appeared on TV screens around the world, the World RX stars will return to Kent.

“I’m the sort of guy who likes to win the big events. I won the European Championship race with a huge crowd in 2013 and then the event with the biggest field of drivers at Lydden Hill,” explained Bakkerud who won last year’s event with Ford Olsbergs MSE.

“I grew up watching my idols racing at this track – it was a great place then and it is now. When it’s such a famous circuit, you really want to deliver. We have a good set-up for the Fiesta here, I think we can be strong.”

Another driver who is eager to deliver this weekend is BTCC driver Andrew Jordan who returns to Lydden Hill this year as a wildcard entry with Team Peugeot-Hansen.

The Englishman, who turns 26 this weekend, explained: “I’ve been working really hard to put something together to do more events but Lydden Hill is obviously my number one priority being my home event.”

Jordan added: “To finish on the podium last year was one of the coolest thing I’ve done in motorsport… but now I know I have the pace to be right up there with the top guys.

“It’s going to be really hard and sometimes you need a bit of luck, but after the podium last year, the aim has to be to win!”

“Everything about rallycross is new to me – the cars, the tyres, the tracks – but I learned a lot at Pembrey in some difficult conditions,” explained 34-year-old Wilks.

“I’m determined to fight for every inch of the track and to do the best job I can for JRM Racing in front of the British fans.”

Other notable entries include the reigning World RX Champion and current leader in the overall drivers’ standings after three rounds, Petter Solberg.

American Top Gear presenter Tanner Foust will also be competing and will be tough to beat considering he has won at Lydden twice before.

Furthermore, Super1600 event winner Janis Baumanis will make a step up to the Supercar for the first time weekend as the Latvian prepares to drive a Peugeot 208 WRX as part of the Hansen Talent Development Team.

As well as 29 flame-spitting Supercars, there will also be 18 TouringCars and 12 RX Lites entries set to entertain the crowds.

A record number of 12 RX Lites entries will also race over the weekend and includes RX Lites round one winner and reigning Champion, Kevin Eriksson.